Kitchens of the Great Midwest: A Novel 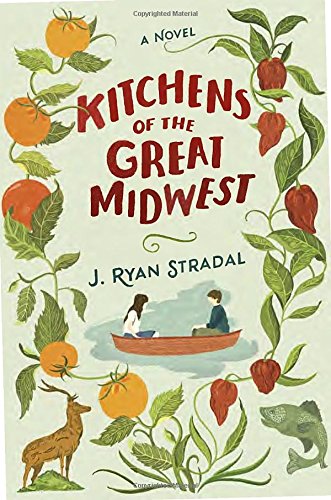 If Eva Thorvald—whose life we follow (more or less) from the time she’s born—ever prepares your food, rest assured it will taste exquisitely unlike anything you’ve ever eaten before. In Eva’s skillful hands, even the most mundane dishes are good enough to set your taste buds singing like choruses of cartoon angels.

She’s the Taylor Swift of the stove-top and, among food snobs, almost as influential.

But it wasn’t always that way. Eva’s childhood meals were more fish sticks and frozen peas than gourmet fare.

Brought up by her Aunt Fiona and Uncle Jarl, Eva doesn’t remember Jarl’s big brother Lars, a chef who everyone said was a legend in the kitchen. He died of a heart attack a few months after she was born.

No matter, unbeknown to the young woman her facility with food was probably written in her DNA anyway. Her biological father spent weeks before her birth plotting a menu for his daughter’s first months of eating solid food. In deference to her toothless state, week one included such tasty treats as guacamole, pureed prunes and applesauce.

As fate would have it, the only memorable edibles in Eva’s childhood were the red hot chile peppers she grew and loved. A misfit at school, she even used them to get her own back on the bullies, concocting something that, once eaten, they would never forget. The tempting churro bites she generously handed out on her 11th birthday were enhanced with the aid of an eyedropper, some scorching off-the-Scoville-chart chocolate habanero chile powder, and a hot infusion chile oil (recipe thoughtfully supplied).

Happily, the chile oil is not the only recipe in the book. From classics such as Caesar Salad—done Eva’s way without anchovies and cheese, just like creator Caesar Cardini’s 1920s original—and French Onion Soup, to Mississippi Mud Bars and Resurrection Rolls, they’re scattered throughout, as befits any foodie novel worth its salt.

Up front, in the acknowledgments, the author gives: “Very special thanks to my great-grandmother Lois Bly Johnson’s church, First Lutheran Church of Hunter, North Dakota, and all of the contributors to the 1984 edition of the First Lutheran Church Women cookbook, on which five of the recipes in this novel are based.”

No prizes for guessing which ones they are.

Not so some of the book’s other characters, such as Pat Prager, a God-fearing, nosy neighbour busy-body. Forget all that skinny-malinky sophisticated supper club fare; I’ll take some of her artery-clogging bars—sweet and tart lemon; rich and heavy peanut butter and chocolate—any day of the week (recipes, again, thoughtfully supplied).

Eva’s magical way with food notwithstanding, her personality’s flat as a pancake. Disconcertingly, a series of often seemingly disconnected characters parade through the book’s pages, but even though it’s tough at times to see how, eventually their lives and Eva’s intersect. Turns out she’s not so much the main ingredient as the binding agent in a quirkily entertaining read.

Will I be making any of Pat Prager's cholesterol-laden concoctions? Bet your sweet cinnamon roll I will.