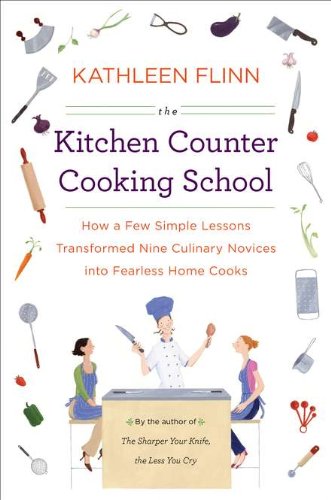 Kathleen Flinn is on to something big: it isn’t that the American public isn’t hearing the message that we all need to eat more fruits and vegetables or that we need to buy locally or that obesity is a real and growing health problem because of all the junk food we consume, it’s that many Americans simply don’t know how to cook.

For those of us that live in a foodie bubble (as Ms. Flinn refers to it), it is worth taking a step back and delving into The Kitchen Counter Cooking School to learn how teaching people how to cook can make a real difference in the way they eat and shop for food.

Fresh off the success of her first book, The Sharper Your Knife, the Less You Cry about her experiences earning her culinary degree from Le Cordon Bleu in Paris, Ms. Flinn seemed to be at a loss as to what to do next until a chance encounter in a grocery story set her on a new course.

While shopping one day she happened to notice an abandoned cart in the middle of an aisle that was filled with processed foods in boxes and jars. Curious about these food choices, she followed the woman who came back to claim the cart and watched her roam the store filling up her cart with frozen prepared dinners and junk food.

By the time they got to the meat department, Ms. Flinn decided to speak up as she watched the woman pick up a family-sized package of chicken breasts. Suggesting that she buy a whole chicken instead because it was so much cheaper, the woman acknowledged she “would have no idea what to do with a whole chicken.” It was then Ms. Flinn realized that “[a]fter a year deboning chickens, and stuffing meat with other meats at a famous Paris cooking school, I had information this woman needed. For some reason, at that moment, I felt compelled to give it to her.”

After this grocery store encounter, Ms. Flinn decided to teach a pro bono basic cooking class to a group of nine strangers to find out if they would change their cooking and eating habits once they learned how to cook.

Part memoir, part teaching manual, The Kitchen Counter Cooking School is as much a transformational book about Kathleen Flinn as it is about her students. Throughout the book she seems to be struggling with her career path now that she has a culinary degree and her detours from the main storyline to work this out are a major distraction.

That said, we are happy that she comes to the conclusion that like Julia Child before her, she will use her degree from the Cordon Bleu to teach and not run a restaurant. Distilling and demystifying all those high-falutin’ French cooking techniques into 10 basic classes for novice cooks is no small achievement, and Ms. Flinn clearly has a talent for it.

Her students (all of whom come with an astonishing array of emotional baggage toward cooking) grow in confidence with every class. It is both heartwarming and inspirational to witness their progress through her gracious and compassionate account. Always encouraging, and never judgmental, Kathleen Flinn sends a message that rings true:

“So who says you can’t cook? Not every meal has to be from scratch, nor does everything you consume have to be organic, locally sourced, and pasture raised. Try to find a comfortable place somewhere between Tuna Helper and ‘Top Chef.’ If you burn, scorch, drop, overcook, undercook, underseason, or otherwise put a meal together that’s less than a success, in the end it doesn’t matter. It’s just one meal. You’ll make another one tomorrow. In a hundred years, no one will know the difference.”

The classes, which begin with basic knife skills and the importance of tasting move on from there to cover everything from cutting up a whole chicken, roasting, braising, making no-knead bread, what to do with leftovers, soup and more. A sampling of recipes is included at the end of each chapter.

In her quiet way, Kathleen Flinn has discovered the missing link in the debate about how to get Americans to eat healthy: teach them how to cook. If everyone who reads this book and already knows how to cook uses it as a template for teaching others, just think what could happen.

In a recent New York Times editorial, Helen Zoe Veit, an assistant professor of history at Michigan State University comes to a similar conclusion by calling for a return to teaching home economics in school as a way to teach kids healthy eating and cooking in the face of the obesity epidemic.

It’s such a simple solution—here’s hoping The Kitchen Counter Cooking School will start the ball rolling and become a real force for change in the way Americans eat.