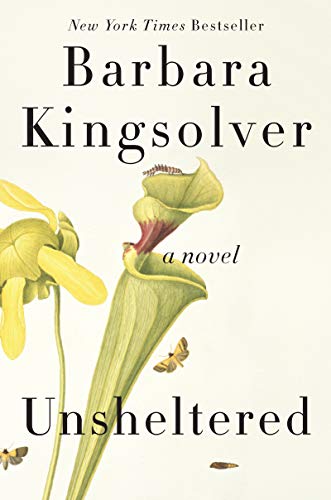 The release of a new novel by multiple award-winning author Barbara Kingsolver is such an important event on the publishing calendar it’s enough to set booksellers’ pulses racing and book clubs all abuzz. Her words are like catnip to lovers of carefully cadenced language and conservationists alike.

This one is a slow-burn kind of book, with a surprising amount of telling rather than showing in the first couple of chapters making for a slightly iffy start. Once the foundations are laid, however (and unlike those of one of the book’s central “characters,” a house, they are firm), it’s a winner all the way.

Unsheltered is a skilful blend of fact and fiction told in alternating chapters. Set within two centuries, the 19th and 21st, it involves two families, two stories and several common threads, including the structurally unsound house. It’s an unravelling of sorts, about topsy turvy worlds in which old orders are bumping up against new with often disastrous effects.

Unsurprisingly for a Kingsolver tale, themes of ecological import and imminent disaster dominate. Her knack for purveying the perfect recondite tidbit is put to fascinating use here, too. Although a work of fiction, most of the story’s 19th century characters and events are real, including pioneering naturalist Mary Treat, a murder on Main Street, a seemingly implausible Venus flytrap self-sacrifice, and the shenanigans of autocratic land owner Charles Landis.

Willa and Iano have moved to modern-day Vineland, a small New Jersey town created in the mid-1800s as a somewhat Elysian experiment by above-mentioned land-owner Landis. Ex-magazine editor Willa and her professor husband, whose tenured position disappears overnight when his college goes bust, are completely strapped for cash, so a house inherited from her aunt offers them refuge, and a year-long local teaching position, which although an insult to Iano’s credentials, an income of sorts.

When the house turns out to be dangerously unstable, and with medical bills for Iano’s obnoxious disabled father Nick, “with his oxygen tank and rabid contempt for the welfare state,” mounting; not to mention the return of their springy-dreadlocked activist daughter, Tig, from a stint in Cuba; and their debt-laden son Zeke turning up with his own tragedy—as well as a newborn son—the outlook is bleak. As if that isn’t tension enough, the siblings are constantly at odds: “Zeke strived to be Man of the Hour, while Tig devoted herself to Sticking it to the Man, if that prize still signified.”

Laid-back Iano isn’t too worried. He’s always had faith in Willa’s ability to save the day. She will, he’s convinced, find a way out of their current conundrum. So when Willa discovers their home may be historically significant, the answer appears to be hiding in plain sight—she must simply root out a valid reason for a preservation grant.

In 1870s Vineland, Thatcher Greenwood, a forward-thinking supporter of Charles Darwin’s newly published theory of evolution, has his own share of problems. Similarly cash-strapped, and with a social-climber of a mother-in-law and wife, the science teacher is banned from teaching real science by a repressive principal.

The only light on his horizon is his friendship with his equally enlightened next-door neighbor Mary Treat, whom he first sees as she’s lying face down on the ground “counting ants. Or spiders!” Naturalist Mrs. Treat is rumored to hold “strange entertainment,” and, indeed, strange it is. Very strange, although perhaps not in quite the way some of her nosey neighbors might imagine.

Her husband is rumored to have run off to New York under the influence of a glamorous suffragette known to be a champion of free love. Mary herself is given to studying tower-building tarantulas, and allows carnivorous plants to nibble on her digits, as Thatcher discovers when, on his first neighborly visit, he finds her almost literally bound to her desk by a Venus flytrap.

In addition to Unsheltered’s alternating story chapters, the author uses the last word or phrase of one chapter as the title of the next. It’s an intriguing device at first, but it becomes increasingly intrusive as the reader—this one, anyway—feels compelled to look out for it, flipping back a page at each new chapter to check whether or not it’s still happening. Overall, though, it’s a tiny grumble for what is an absolute giant of a book.

Eighteen years ago, Barbara Kingsolver established—and still funds—The Bellwether Prize for Socially Engaged Fiction. She created it to promote fiction that addresses issues of social justice and the impact of culture and politics on human relationships. For this remarkable book, which does all of those things and more, she should probably receive it herself.