The King's Painter: The Life of Hans Holbein 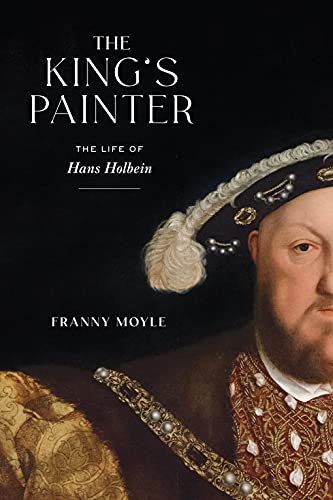 “The King’s Painter is an outstanding publication that requires and repays a very close and careful reading.”

For readers who know Hans Holbein the Younger (1497/98-–1543) primarily from his portraits of a purse-lipped Henry VIII, the painter’s life, before he acquired the appellation of “the king’s painter” (circa 1535), will be a revelation. This is not to underestimate the extraordinary work Holbein produced at the 16th century English court, in capturing for posterity not only the king himself, and several of his actual and potential wives, but also some of the great statesmen of the day: Thomas More, Thomas Cromwell, and Cardinal Wolsey amongst others.

As Franny Moyle demonstrates in this impressive and meticulous portrait of Holbein, his life and work were varied and turbulent. With her close examination of the European context, as the Reformation spread across Northern Europe challenging Catholicism, she demonstrates Holbein’s extraordinary “proximity to events” as well as his skilled navigation of them, often reflected in the visual and symbolic ambiguity of his paintings, whose meaning was very much in the eye of the beholder. “In an era when one’s adherence to the wrong king or the wrong religious ideology could end a career, or worse a life, Holbein delivers an image in which the audience can see what they want to see.”

Holbein was born in Augsburg, Bavaria, but spent the early part of his life in Basel, Switzerland, and the last decade in England where he died in 1543. He learned his trade from his father, Hans Holbein the Elder, whose work was primarily dedicated to devotional paintings and imagery within the framework of unquestioned Catholicism, although he also captured the likenesses of some celebrated men of the day, as well as of his young sons Ambrosius and Hans, who can sometimes to be found as models within his religious paintings.

Basel, where the younger Holbein appears following his father’s crisis of indebtedness in Augsburg, was also the home of the European philosopher and humanist, Erasmus of Rotterdam (1466–1536), who had a major influence on Holbein’s thinking, as well as being the subject of one of his most famous portraits. Basel was also the home of a highly developed printing industry that presented painters with the potential for a much higher return on their labor than mere painting.

Engravings, based on paintings, which could be printed in unlimited number greatly expanded the circulation and visibility of the original commission, that might otherwise remain in a church or a family home. This could provide a huge breakthrough in terms of celebrity and income. The German painter and printmaker Albrecht Dürer (1471–1528) had already been exploiting this technology very successfully.

As Moyle notes in her introduction there exists little primary written material about Holbein apart from some administrative documents from his life in Basel as a young man, and from England where he worked for the last decade of his life and where he established a second family. Unfortunately, no diary or journal written by the painter has been found, though Holbein is known from the letters and poetry of the many famous people who admired him. The primary evidence thus comes from his prodigious output of portraits, murals, sketches, engravings, miniatures, medallions, designs for silverware and armor, and more.

Moyle provides very detailed and close analysis of many of these artefacts and their situation relative to key events. Holbein’s technical genius resulted in portraits that shocked by their verisimilitude; the French Ambassador Charles de Solier’s portrait (1534–35) stands out here; and some depictions of Henry VIII were said to strike terror in the beholder.

Many of Holbein’s portraits also reflect faithfully the multiple chins, warts and all, of his sitters in an uncompromising way (“Holbein does not see any positives in the bloated features of this sitter. In fact he goes out of his way to draw a mole on her chin from which protrude a number of thick, dark, wiry, curling hairs”). But always with close attention to their jewelry and clothes, even to show how a robe had been folded in the closet before being assumed, or how a neckline sported a just visible hanging thread.

Several of his portraits reflect affection for his sitters, such as that of his wife and children (1528); or on a grander scale the painting of Christina of Denmark, Duchess of Milan (1538), upon whom Henry VIII had some passing designs. The King’s Painter was despatched on many missions to capture the likenesses of potential spouses, and Moyle interrogates ambiguities in Holbein’s portrait of Anne of Cleeves to assess whether her shortcomings in the flesh could have been anticipated.

But as Moyle also shows, as he matured as a painter Holbein increasingly included political commentary and satire in the forms of objects of symbolic value, which were open to the viewer’s interpretation. She notes this quality in an early woodcut depicting Luther as either valiant, or ridiculous depending on one’s point of view; and attempts to crack some of the “encoded messages” inherent in the famously enigmatic The Ambassadors (1533).

While there are many plates included in the text it is understandably not possible to feature all the paintings, portraits, miniatures, medallions, engravings, designs, drawings, book illustrations and wood cuts which she analyzes. A very minor criticism would be that an unobtrusive system of reference could have made it easier to match her fascinating text with the images described, which are not always in an order that corresponds to their appearance in the text. But this is a quibble. The King’s Painter is an outstanding publication that requires and repays a very close and careful reading.