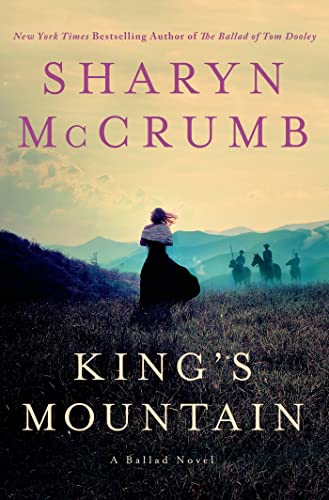 The trouble with Sharyn McCrumb’s work is that it’s so finely wrought you get immediately sucked in and can’t put the book down. Doesn’t matter what the subject is: She makes the world real and the people convincing. It’s hard to remember that they live on the pages, not next door.

Ms. McCrumb continues this mastery in King’s Mountain, the true story of a little-known battle in the Revolutionary War, said to have turned the tide in America’s favor. It forms the tenth volume in her Ballad series, which pays homage to people and events in Appalachian history.

King’s Mountain is not a novel read for suspense. The outcome is known from the jacket (as well as the historical record), so read this one for character; time; place; feeling; as well as for education. Ms. McCrumb deeply researches her topics, and in this case she’s covering a battle that swept up one of her ancestors so she made sure to get all her facts straight.

The novel, therefore, is more “faction” than historical fiction, because she tells the story through the voices of real people instead of inventing a character to play against a historical backdrop.

She introduces us to the Overmountain Men led by John Sevier, Isaac Shelby, William Campbell, and many others who became notable figures in American history. In the autumn of 1780, unwilling to let the British overrun their territory, these settlers rounded up a thousand volunteers to stop the enemy advance once and for all.

The narrative voice alternates between Sevier, a frontiersman, and Virginia Sal, a camp follower of the British force led by Patrick Ferguson. We also get one chapter in Ferguson’s voice, but mainly he is observed by his consort, Virginia Sal. The dual voice gives an intimate view of both sides as they draw closer and closer to a climax battle that proves “war is not a game for gentlemen.”

Because this book covers the story behind that battle, it’s a slow and steady buildup to the main event, followed by a quick denouement. The buildup is kept engrossing by the logistics of mustering an army from backwoods settlers across several states who are already beleaguered by Indians; then moving them over the Appalachian mountains en masse.

It’s hard for us modern folks to grasp the arduousness of getting supplies and traveling through the wilderness in the 1700s. Ms. McCrumb makes that painfully clear. It may be even harder to understand how the colonial American style of fighting, influenced by combat with natives, contrasted with the European style, especially British. Our guerilla tactics are one of the reasons we won independence.

“The Indians may slip in and out of the woods without ever you knowing they were there until too late,” says Virginia Sal, “but the king’s army rampages around like so many rutting bulls, making all the noise and commotion they please and proud of the display of it.”

Even so, moving an American militia through the mountains isn’t something you do in secret. Both parties knew the other’s whereabouts long before they met. When and where they would clash provides the book’s only suspense.

For the rest, it’s all about hardship. Ms. McCrumb includes multiple scenes wherein seasoned campaigners advise neophytes about the rigors of being a soldier. Aside from the violence of war, which always shocks everyone, there’s a duality between glory and misery often downplayed in the aftermath.

Sevier tells his son: “Soldiering is as much walking and waiting and sleeping rough as it is adventure and excitement. . . . when you tell this tale to your children in years to come, you’ll leave out all the tedium of the marching and you’ll forget the times that the bad food put knots in your belly or the blisters pained on your heels. You’ll only talk about the glory of the battle. They say that women forget the pain of childbirth and remember only the joy of the babe that comes of it. Maybe men are like that about war.”

Hm. That would explain a lot about history.

Meanwhile, Virginia Sal conveys the other side of hardship: poverty and victimhood, explaining why she attached herself to the British army. “I never yet had a conviction—political, religious, or heartfelt—that could not be scotched by an empty belly or the need for a dry place to sleep.”

Another thing that those of us who can afford to read books don’t have to deal with.

Perspective, then, is an important theme of this novel. We see the rightness and wrongness of both sides through people we can relate to. And for American readers at least, we can better understand how we came to be.