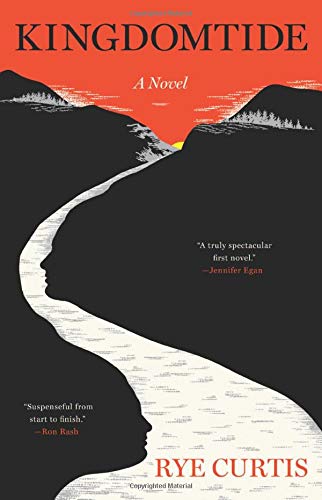 “It's an unforgettable experience. The author is an extraordinary writer . . .”

It's going to be darn hard not to love this book. It's amazing. Equally amazing is that someone so young could write it with such insight and understanding of the characters, one of them a 72-year-old woman. His depiction of her is wonderfully honest.

In a letter to booksellers posted on the internet author Rye Curtis said the idea for the book came to him when he was 27 years old and it was another year or so in the making. Looking at his picture on the inside back flap, he appears to be barely out of his teens.

Seventy-two-year-old Cloris Waldrip and her husband are being flown in a Cessna 340 to a vacation cabin in the Bitterroot Mountain wilderness. Soon there is trouble that she describes in her stream-of-consciousness narrative:

"The little airplane whined and out my window the propeller had slowed such that I could make out each blade. It occurred to me that I did not know how an airplane stays in the air at all, and I made up my mind that we were all of us idiots for ever setting foot in one. The nose tilted downward and I could tell that we were descending because my arms were light and all my insides seemed to float. . . ."

The plane goes down and breaks apart in rough country, but she survives with minimal injury. Not so her husband.

Mr. Waldrip's body is spread-eagled in the uppermost branches of an evergreen on a steep slope of the mountain. She thinks Terry, still strapped into the pilot's seat, is gruesomely dead, but he's not quite. Though his brain is muddled, his heart still beats. He's unconscious, but wakes up screaming:

". . . Terry was not in a good way at all. He had spit up a segment of his jaw which yet held several of his teeth in it and it had dropped into his shirt collar. One of his blue eyes was black entirely. He did not act like he could see out of either of them. He kept up his crazed screaming, and I matched each one. . . . There we were, just hollering at each other. . . ."

After a terrifying day trying to figure out what to do all the while listening to the pilot scream and babble nonsense, she crawls back into what is left of the plane seeking warmth and finds that the radio appears to be functional. She holds the button on the receiver and sends a distress call which someone hears but misinterprets. She waits all night wrapped in the pilot's sweater waiting for rescue that does not come.

Meanwhile, Forest Ranger Debra Lewis, carrying a .44 revolver on her hip and never without a cup, mug, or thermos of merlot within arm's reach, is advised by  fellow ranger Claude Paulson that he had received what he thinks was a distress call, but could not make sense out of the warped transmission or determine where it was coming from:

"Claude put up a hand. . . . We can't say we know it was a distress call. All we can say is we heard a humanoidal voice say cloris. Thrice it said it. Cloris, cloris, cloris. Like that. It was garbled."

In the morning, Cloris tries the radio again. When there is no response, she concludes that rescue is not on the way. She retrieves what she can from the wreckage: her purse, her medication, a packet of tissues, a handful of caramels, her Bible, house keys, matches, a hatchet, and other items she can't reach without releasing Terry's decomposing body from where it is strapped into the pilot's seat and going through his pockets.

Fighting off guilt, but motivated by an instinct for survival, Cloris heads out into the wilderness—abandoning the body of her husband in the trees, leaving poor Terry babbling nonsense—to go find help on her own. A helicopter passes overhead several times, but no one spots her.

Readers will be hard pressed not to get misty eyed for Cloris while reading the heartbreaking passages of the aftermath of the crash. Surely author Curtis was teary eyed as he wrote them. (Yes, authors do cry at their sad scenes, and laugh at their humorous ones, too.)

The author lets the reader know in the beginning that Cloris lives to tell the story as a resident of an assisted living facility and is detailing her ordeal in a journal. She tells all, including some intimate shameful thoughts and deeds:

"When the sun was up and it was warm enough I removed my clothes and washed them in the creek . . .Then I bathed in the shallows. It is not something that I easily admit, but I believe it is important; it was romantic to be naked outdoors. I thought about my first kiss. . . ." There's more.

Some readers and reviewers have called this book weird, funny, and its characters quirky and oddball, but not so. They may look odd and act funny and swear a lot and drink too much, but they are as complex and full of goodness as the soul of mankind. Ranger Lewis, divorced from a husband in jail for trigamy, is merely trying to survive her own troubles. Claude is helping out his friend Petey whose wife ran off, and Cloris is trying to stay alive, she's not ready to die. And Bloor, the search and rescue team leader, is a complicated, independent, pragmatic man. Together and alone, they exhibit the decency and resilience of humankind.

Kingdomtide was a New York Times New and Noteworthy Best Book for January 2020, but it's more than a book. It's an unforgettable experience. The author is an extraordinary writer whose books will surely be eagerly anticipated and welcomed with glee.

Fans of Jess Montgomery, William Kent Krueger and Tim Johnston will be first in line at the bookstore for the next Rye Curtis novel.