In the Kingdom of the Ditch: Poems 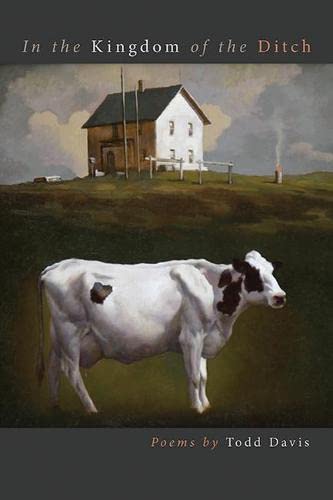 “We can only rejoice at these poems.”

Todd Davis is the author of five books of poetry, including the remarkable chapbook, Household of Water, Moon, and Snow: The Thoreau Poems (most included here).

And though his biographical statement in the book primarily lists his achievements as author, editor, and teacher, his poems are remarkably personal and filled with family life, including the aging of his mother, the recent passing of his father, the maturing of his young sons, and the love of his wife.

Immediate comparisons would be to poets Mary Oliver and Wendell Berry, poets who are intimate with nature and its processes, and yet Mr. Davis cuts his own path here as he has in previous collections, The Least of These, Some Heaven, and Ripe. His work is personally true and wise.

Like Oliver and Berry, he writes of the spirit natural, uniting particular details with universal understandings. In the title poem, we enter this world: “where Queen Anne’s lace holds/ its saucer and a raspberry its black/ thimble, the shrew and the rat snake/ seek after the same God,/ who mercifully fills the belly/ of one, then offers it to the other.” The poems have this open questioning, a watching and listening, that leads to quiet understanding. The tone is humble and soft, ever prayerful, yet penetrating. In the book’s first poem “Taxonomy” he declares:

We’ve been taken captive
by the world, named by it, taught

to eat from its table. The whetted blade
slides through the flesh, thin veil

When we die
may we be a pleasing word
placed in the mouth
of the world.

Perhaps it is his Mennonite background that opens him so readily to the spiritual, but make no mistake, his is a writing that is real and close to the grain. In “Consciousness: An Assay” we enter nature with him, following a path where “Black snake root goes to seed: black birch/ litters the trail with yellow light. Trout/ wrinkle the surface of the pond, curve back/ into the premature darkness of the water.”

And we follow this vivid trail with him to some sense of significance: “This is the way/ of consciousness, the beginning/ and the end, the alacrity of struck stone,/ the drumming of a grouse as it breaks the air.” The poem dedicated to Buddhist poet Jane Hirshfield is fresh and alive.

An underriding subject and theme of these poems, however, is the author’s awareness of death and the significance it brings to life, again a natural process. In “What I Told My Sons after My Father Died” for example we hear him reaching and touching the life-death process, “My father taught me/ the names for trees, which in turn I’ve taught my sons./ That’s what it was like after he stopped breathing./ A bee disappears down the flower’s mouth. / Although we can’t see it, the bee’s still there.”

His poems are most often described by fellow poets as “gorgeous,” even “breathtaking,” to which I would add fundamentally true and wise. In Part II of the book we have a fine cluster of 16 poems that capture intimate portraits of Henry David Thoreau in his world.

These open for us the mind and heart of this great American naturalist and spiritual thinker. In “Thoreau Dreams of Margaret Fuller/ Three Days after Her Death” we sense the personal grief of both Fuller and Thoreau as she stands on the deck watching her life and child disappear in the waters, and he later stands on the shore looking out feeling her spirit and great loss.

Mr. Davis thus personally bonds with Thoreau in a way that is again intimate and true. We can only rejoice at these poems.

The third section of the book is less cohesive and wider in range, drawn from various aspects of the poet’s world and life. “Three Songs for Flannery O’Connor” seems almost to be written by another poet, for its harshness and apparent lack of compassion. And yet there are gems in this section as well.

A personal favorite is his “Missing Boy” poem, in which any parent of a teenager son or daughter will find some solace. For the sense of loss is all too common, as youthful questing and rebellion are captured in these telling images: “Like a pine/ snake,/ he slides/ toward his/ burrow,/ leaves behind/ the skin/ of his former/ self.// It sloughs/ and curls/ scales/ of what/ he’s learned/ but now believes/ he does not/ need.”

These poems are really lyric meditations on the way life and the world turns, done in stillness yet shared through a poet’s trust in the world and the word. The book ends with the poet talking with his dead father and by extension to us and himself.

“Catching You Up” begins with sharing: “I’m in the upper field again/ where rock fell/ and the sky opens./ No trees grow here./ Deerberry hangs its pitch/ black fruit like lanterns/ carrying bits of night/ into daylight,” then moves through sensing “your being/ dead, me alive; my presence/ in this field, your absence; the sun/ in September, the coming dark/ of December,” and it concludes with quiet assurance, “I’ll continue/ down the old logging road/ that leads toward the spring/ that runs along the bottom/ of the ridge.”

We can only be grateful for this music of living, for such song and such a singer.