The Kingdom of Back 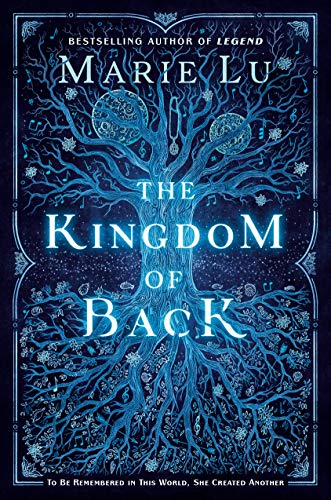 “Suffused with a love of music and a healthy dose of fantasy, The Kingdom of Back is sure to cast a spell over Lu’s eager readers.”

In this historical fantasy with a feminist angle, Marie Lu has crafted a tale of music and magic quite unlike her other popular YA series. Born with a gift for music, Nannerl Mozart has but one wish: to be remembered forever. But even while delighting audiences with her playing, she knows that this is an unlikely goal. As a girl in 18th century Europe, she is forbidden to compose music and is expected to marry and start a family as soon as she comes of age. (These restrictions don’t apply, however, to Nannerl’s adoring little brother Wolfgang.)

When eight-year-old Nannerl auditions for Salzberg’s royal trumpeter, hoping to be discovered, she instead discovers a fantastical land, which is all bound up with the stories she tells her brother and her own longings for fame.

Later, in their music room, Wolfgang and Nannerl meet a midnight visitor, a fairy princeling called Hyacinth. He steals her music notebook and lures them from their house into his mysterious world, where trees grow upside down and two moons hang in the sky. The kids get in trouble with their overbearing father for their excursion, but when Wolfgang tries to defend his sister by playing a minuet from the lost notebook, he reveals his own musical genius. Mozart Senior is overjoyed and begins making plans for both of his children to tour and perform.

On a shopping trip, the siblings visit a trinket shop, and an inner door leads Nannerl directly into the magical world, which Wolfgang has dubbed The Kingdom of Back. There, Hyacinth returns her music notebook, telling her:

“You made a wish, Nannerl, and so I have come to you. You’ll discover that your notebook will now serve you in more ways than simple lessons at the clavier. Use it as your path to me. . . . But be wary what you wish for. Wishes have a habit of surprising their makers.”

Hyacinth has his own wish—to return to his fairy throne—and he says if Nannerl will aid him, he will grant her heart’s desire. Though wary, she agrees to the bargain and returns to her world with her notebook.

As the story unfolds, Wolfgang and Nannerl grow in their musical abilities. Soon they’re invited to play for the emperor and empress in Vienna. Their fame spreads, and their father puts together a musical tour throughout Europe. Throughout this, Nannerl is composing in secret, cheered on by her brother and inspired by the mystical music she hears from the Kingdom of Back. Still, she’s conflicted:

“I would be nothing more than a performer for my brother’s compositions. If I wanted immortality, it would not come from my writing. . . . What would others think of my father if they knew I composed behind his back? What kind of girl shamed her father by secretly doing a man’s work?”

Lu does a terrific job of blending a modern, feminist awareness with the reality of life for an 18th century girl. Nannerl’s longings are relatable and realistic, while by contrast, the Kingdom of Back is as fantastical a fairy kingdom as the reader could wish for.

As Nannerl grows older, Hyacinth demands more and more difficult favors in exchange for his help, in the process revealing hints of his own, darker side. Then finally, he demands the hardest favor of all, and she’s left to choose between her family and her desire for fame. Suffused with a love of music and a healthy dose of fantasy, The Kingdom of Back is sure to cast a spell over Lu’s eager readers.