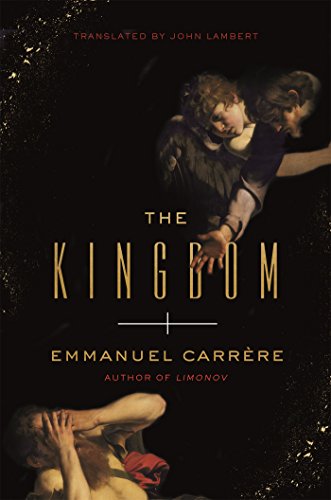 Nietzsche declared God was dead over a hundred years ago, but contemporary readers can’t get enough of religion. Over recent years there have been several popular books about Jesus and the apostles alone, from Reza Aslan’s Zealot to Tom Bissell’s Apostle, to name a couple.

Mixing these books together with strong doses of personality and creativity might produce something like Emmanuel Carrére’s The Kingdom. Ostensibly a fictional account of the early Christians, one might assume that The Kingdom would be a novelized version of the gospels. But that’s not what it is at all. It’s rather about Emmanuel Carrére trying to become a better person.

Pushing 60, Carrére has been a practitioner of yoga and meditation for some time. But before he wrote My Life as a Russian Novel, Lives Other Than My Own, and Limonov, the French author, screenwriter, and film director was a devout Catholic. For a period in his life he prayed and went to Mass every day.

As a younger man he was interested in theology “as a branch of fantastic literature,” as Borges called it, but he would have found someone who believed in the resurrection of Christ as strange, like “someone who’s not only interested in but also believes in Greek mythology.”

But then in his thirties, under the influence of his eccentric godmother, he experienced a crisis, and by the end of it, he believed. The moment occurred while reading the Gospel of John, and the text, for him, became scripture:

“Amen, I say to you
When you were younger, you used to dress yourself
And go where you wanted.
But when you grow old, you will stretch out your hands,
And someone else will dress you,
And lead you where you do not want to go.”

Carrére wanted to be lead somewhere he didn’t want to go. He gave himself up and made Kierkegaard’s leap of faith. And while he was a Believer he kept notebooks on daily readings of the New Testament. Dozens of them. Twenty years later, when Carrére was no longer a believer and wanted to retrace his path as one, The Kingdom began with an exegesis of these notes and turned into a narrative of his investigation.

To enter the New Testament from a novelist’s point of view, Carrére was looking for a “small, hidden, side door.” He found it in a shift of narrative perspective in the Acts, when the third person abruptly becomes the first person plural. For 16 chapters, the book is an impersonal account of Paul’s adventures: Paul did this and Paul did that.

Then suddenly there’s this: “When he had seen the vision, we sought passage to Macedonia at once, concluding that God had called us to proclaim the good news to them. We set sail from Troas, making a straight run for Samothrace, and on the next day to Neapolis.” I was there, Luke is discreetly saying to those paying attention. This is an eyewitness account. Carrére jumps through this door, throwing himself into the first century Mediterranean, taking over where scholars leave off by imagining what was going through the mind of Luke as he composed his Acts and gospel.

Luke “the beloved physician” was a learned Greek who, like many in the Hellenized first century Roman Empire, was interested in Eastern religions, specifically Judaism. Carrére likens this to Western interest in Buddhism today, with Judaism being “a religion that was both more humane and more refined, with that extra bit of soulfulness that was lacking in the waning paganism of the day.”

Greeks like Luke would go to synagogue, read the Septuagint (the Greek translation of the Hebrew Bible), and observe the Sabbath. Not being circumcised, and understandably not wanting to be, they were not and would never be Jews.

For Luke, Carrere writes, “going to the synagogue was less like embracing a religion than attending a philosophy class—just like when we practice yoga or meditation we become interested in Buddhist texts without feeling obliged to believe in Tibetan divinities or turn a prayer wheel.”

But then at a synagogue in Troas, Luke hears a sermon by a rabbi calling himself Paul, who proclaims that the Messiah foretold by the prophets had recently lived and died in the Roman province of Judea. Paul’s not ashamed to admit he never met this man Jesus, but that’s no matter. He knows the Jesus of the spirit, while the still-living disciples merely knew Jesus of the flesh. Led by Jesus’s brother James, the early Christians of Jerusalem were Jews who strictly observed the Law.

And yet this Paul was going around saying forget the Law, the Law is over. There’s no need to get circumcised or observe the Sabbath. Eat all the bacon and shrimp you want, God doesn’t care, because a new covenant has been made with the life of Jesus, whom Paul called Kristos and claimed came back from the dead.

One of the most striking things about close reading the gospels is that there’s nothing at all to suggest that Jesus was resurrected in the flesh. Sure, a few people claim to see him after his death, but then he vanishes. It’s clear it was a spiritual resurrection, a brief layover between this world and the next. If Jesus was crucified, buried, and then suddenly alive again and leading a movement for another 20 years, now that would have been a real resurrection. For better or worse, that wasn’t the case.

But again, Paul doesn’t care. To him, it’s all about Jesus being resurrected. If Christ has not been risen, then our preaching is in vain. Back in Jerusalem, James and Peter get word of what Paul’s doing, and they don’t like it. They call him back for some talking to. Tail between his legs, Paul goes to the Holy Land, and Luke goes with him.

While Paul’s being scolded and then imprisoned in Caesarea, Carrére imagines that Luke must have met some people who knew Jesus personally. Perhaps a certain disciple named Philip, who perhaps had a certain roll of papyrus, a scroll known to scholars as Q, the source, the sayings gospel with material shared by Matthew and Luke but not the earlier Mark.

Up until then Luke only knew Jesus through his “guru” Paul, but here he reads the actual words of Jesus for the first time, and he’s blown away. He starts going around Jerusalem interviewing people and—but wait, this is starting to sound like a novel after all.

And it is. That is, they are—the gospels. Based on a true story, sure, but fiction where fiction was called for. And that’s what Carrére is doing in The Kingdom: exploring how the writers of the New Testament got their information. Did they hear it, read it, interview witnesses, or simply imagine it?

“I’m a writer who’s looking to understand how another writer went about writing, and it strikes me as self-evident to say that he often made things up.” Not only embellishing but adding their own Sondergut, or special material. The Magnificat, the Good Samaritan, the Prodigal Son: all Luke’s inventions. But instead of dismissing the truth of the gospel as mere fiction, Carrére is rather impressed: “I appreciate these bits from the point of view of a fellow tradesman, I’d like to congratulate my colleague.”

There’s a lot of could be’s and must have’s and maybe’s, with Carrére admitting he’s often “on thin ice.” “I know you have to be aware of projections and anachronisms, but I’m certain that there was a moment when Luke said to himself that this story had to be told, and that he would tell it.”

And why not? Why is this fiction? Recent works passing as nonfiction are full of speculation, like Edward Jay Epstein’s How America Lost Its Secrets, about the possibility of Edward Snowden being a Russian spy—if this, then that, and if that, then we can assume it must be this. And that’s basically what Carrére is doing in The Kingdom.

Intelligent, wealthy, and a judge at the Cannes Film Festival? He’s definitely not getting through the eye of that needle. But he’s fascinated with looking through it. And it’s quite a pleasure to watch him look.