The King of Sports: Football’s Impact on America 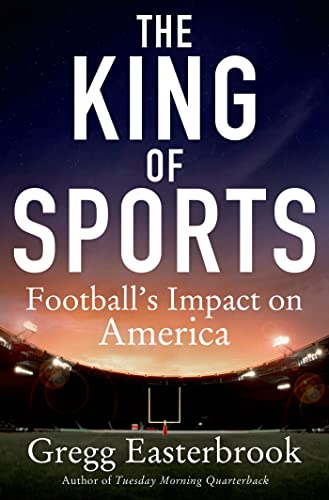 “Here’s hoping that The King of Sports becomes a manual for improving the game that Easterbrook and millions of Americans so deeply love.”

Prussian ruler Bismarck famously remarked that if you like democracy and sausage, you should not watch them being made. According to Gregg Easterbrook’s fascinating and depressing new book about football, The King of Sports, you can add the NFL to that list.

Easterbrook contends that for all its value as a character building sport replete with endless excitement, football as we know it is an unsustainable disaster.

The owners and the league conspire to shake down municipalities and even the federal government for financial breaks and tax breaks that come at the expense of the ordinary taxpayer. Everybody knows this is fact, but Easterbrook provides a truly harrowing level of detail about how we suckers—I mean, taxpayers—subsidize the pasha-like lifestyles of team owners and their families.

It gets worse. Football is essentially built on a plantation mentality, Easterbrook argues, with poor inner city and rural children at the bottom of the pile. The odds against making the NFL are astronomical for any given kid, but that doesn’t stop gullible parents from dropping hundreds or even thousands of dollars on programs, equipment, showcases, and other come-ons promising a gateway to the NFL but in reality simply separating the poor from their hard-earned cash.

Youth football comes in for a terrible beating in Easterbrook’s book. Children as young as seven are playing in full pads with full contact, while experiencing merciless verbal abuse from coaches with bloated egos and nothing at all to reign in their egregious behavior.

Players who fail to entertain through the quality of their play are quickly cast aside, even though they might have exposed their bodies to painkillers, legal and otherwise, or risked losing their jobs. These are all facts we as fans have always sensed, but into which we never wanted to delve too deeply. Easterbrook delves. And delves. And then delves again.

Intriguingly, Easterbrook loves football and writes not as an outsider outraged by the violence of the game but as an individual who played and now coaches inner city youths in his beloved sport. This lends an extra layer of credibility to his work.

While you think you may know what’s wrong about football, the bottom line of this book is that you had no idea just how bad things really are. Did you know, for example, that hidden within pretty much every college tuition bill is a fee for NCAA sports, helping to subsidize athletic dorms, gyms, and training tables to which non-elite athlete students will never be admitted?

Did you know that bowl games such as the Fiesta Bowl have enormous staffs that earn ridiculously high salaries simply to present one or at most two football games a year?

Did you know that the three-point stance, requiring linemen to place one fist on the ground prior to the snap of the ball, practically ensures violent, injury-causing, helmet-to-helmet crashes that lead to concussions but have no bearing on the quality of play?

Easterbrook, an accomplished sports writer and ESPN columnist, has written a book for those who share his passion for the sport while at the same time desire to see the game made safer and fairer. He’s not at war with football; you could call his work a lover’s quarrel. Will any suggestion he offers become acted upon? Will the NFL, for example, cease to be a nonprofit organization—even though it is more profitable than practically every other business on earth?

Will there ever be any kind of regulation of youth football conferences or showcases that leave attendees with little more than a t-shirt and a lot of false hopes for their time, money, and trouble?

And what about Naomi?

Football is indeed the king of American sports, Easterbrook writes, a complex, highly mechanized game reflecting our complex, highly mechanized lives. In his book, Easterbrook essentially presents the seamy side of pro, collegiate, and youth football, the side that team owners and high paid collegiate coaches would never want you to see. He offers, by contrast, the clean, moral approach to college football that Virginia Tech symbolizes, showing that you can run a decent program and still win big games.

Yet the overall impression of football today, after having gone through the Easterbrook treatment, is of a game deeply in need of reform on every level. Here’s hoping that The King of Sports becomes a manual for improving the game that Easterbrook and millions of Americans so deeply love.