A King in Cobwebs (The Tales of Durand) 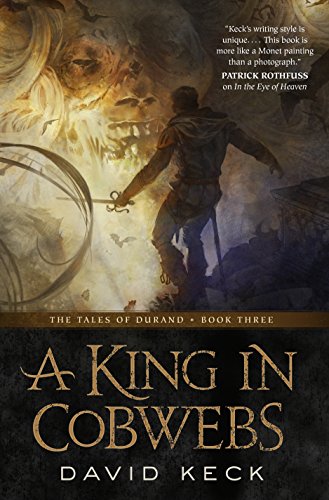 “A clever and hauntingly grim fantasy . . . that will most certainly entertain fans of swordsmen, medieval sieges, and battles.”

Once a landless second son, Durand has sold his sword to both vicious and noble men and been party to appalling acts of murder as well as self-sacrificing heroism. Now the champion of the Duke of Gireth, Durand’s past has caught up with him. The land is at the mercy of a paranoid king who has become unfit to rule.

As rebellion sparks in a conquered duchy, the final bond holding back the Banished breaks, unleashing their nightmarish evil on the innocents of the kingdom. In his final battle against the Banished, Durand comes face to face with the whispering darkness responsible for it all: the king in cobwebs.

David Keck is a New York based author, middle school teacher, and cartoonist. In his epic trilogy of the Tales of Durand series he saves the best for last in A King in Cobwebs: The Tales of Durand, Book Three.

The final installment of this powerful medieval fantasy sees Durand Col, the stalwart champion of Gireth taking his customary place amongst the trials and tribulations that befall the kingdom of Errest the Old. Abravanal, Duke of Gireth and holder of the Duchy of Yrlac is ordered to ride with his household to the Fellwood Marches by King Ragnal. Along the road, Yrlaci rebels harass Gireth and his daughter, Almora is kidnapped by Hornbearer, leader of the nightmares. Durand is ordered to rescue her and then leads the Duke’s army in a crucial battle against the maragrim hordes as they surge toward Eldinor, Errest’s capital.

“Durand imagined the hideous creatures on all sides, like the waves on a hellish sea . . . He saw the clear prints of long-fingered, gripping hands . . . And then he saw the marks of the Hornbearer: huge, deep, and long-toed. Blood tinted the crooks and angels. White surcoats, stained. No men. White banners, swords and lances like half-erupted teeth. Trappers and no horses. Conran the Marshal would have made his stand here like some wild ship’s master. So much blood.”

A clever and hauntingly grim fantasy, A King in Cobwebs does a wonderful job of developing one the most realistic and believable imaginary worlds. Keck’s characters feel like gritty ghosts from a distant primitive past that are driven by politics, love, financial need, and desire for honor. A King in Cobwebs is an engaging and breathlessly paced read that will most certainly entertain fans of swordsmen, medieval sieges, and battles.