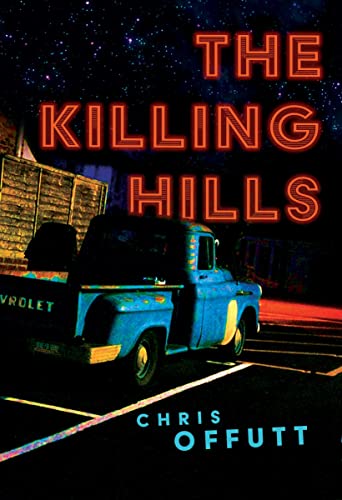 “The Killing Hills probes the darkness in both land and families, along with the limits of forgiveness. It’s not just a fine and unforgettable crime novel. It’s a heartbreak and a bond.”

Chris Offutt’s first crime thriller is far from his first book, since he’s already had two award-winning novels. The Killing Hills spins the grit and danger of a murder investigation into a gruffly tender examination of hardscrabble rural life in the hollers of Kentucky. From the challenges of family feuds and payback frictions, to the dangers of grandparents armed with pocket pistols and long guns, Army CID agent Mick Hardin is in almost as much danger as when he was in combat. But he has a lot less assurance as to who are the “bad guys” around him.

Mick’s home on leave to see his pregnant wife, a woman who has loved what he loves: this place and its half-crazy people. But nothing’s what he expected on his homecoming. “He loved her. He would always love her. He’d never met a woman he liked as much, or seen one he thought was better looking. During sex, Peggy’s face seemed euphoric, her mouth tiny, eyes wide as if drugged. That’s what bothered him. Not the sex or the child growing in her womb, but the sheer injustice of another man seeing her face that way.”

Stranded among his own emotions toward Peggy and their fracturing marriage, Mick accepts a potent diversion: to seek the murderer of a local woman, as an unofficial deputy to his sister, the local sheriff. Caught in a sexist political bottleneck and without enough staff even for routine work, Mick’s sister Linda really needs him—even if she has to wait for him to kick off his latest hangover.

Mick’s strong understanding of how Kentucky hill life operates draws him into the web of interactions around the dead woman. Even an old ginseng gatherer can be both an informant and a danger to him; someone walking a back road should be offered a ride, for instance, but when Mick does so, delivering the walker—after an exchange of names that lets each man place the other’s family—to the third holler down, he finds a remarkable situation: a live mule with a chair lashed to its back, roped and serving as a support to a front porch roof.

Though the scene is both very funny and very poignant, it’s Mick’s quick assessment of how to resolve it, complete with release of the mule (which of course bites him), that reveals the kind of investigator he is: one who can think several steps ahead and alter plans as results change around him. He explains his reasoning to his passenger after the fact: “If the mule had stayed hooked up to your porch too long . . . you’d have to do something back . . . Then my sister would get mixed up and somebody’s setting in the jailhouse. So, no, it ain’t necessarily for [the mule], but for the good of everybody.”

He’ll need all of that forethought and backward looking to determine who had the motive for the killing and how it took place.

Loyalty and betrayal slide back and forth in this tightly plotted, immaculately paced novel. What binds them together is Mick’s capacity to care intensely, not just for his estranged wife, but for the landscape and people he’s grown up with. The Killing Hills probes the darkness in both land and families, along with the limits of forgiveness. It’s not just a fine and unforgettable crime novel. It’s a heartbreak and a bond, laid out in precise scenes and careful conversations, with the most painful of choices remaining in the hands of those who live—and love.