Killing a King: The Assassination of Yitzhak Rabin and the Remaking of Israel 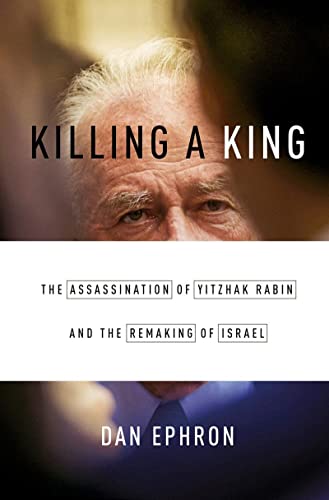 Killing a King by Dan Ephron is extraordinary in its detail as a behind the scenes account of both the Oslo Peace Accords and the assassination of Israeli Prime Minister Yitzhak Rabin. By skillfully building tension and suspense amid his reporting of the facts, Ephron bridges the gap between a journalistic account and the relatively new genre of the true thriller. However, the political bias of the work leaves it wanting in balance for anyone seeking to understand the era and the Israeli-Palestinian peace process at large.

Killing a King is much more than a recounting of the assassination of a national leader. Ephron combines detailed research with sheer journalistic legwork to build a picture of the birth of the peace process as we know it, including the moods and personalities of the major players and the shifting political climate in the Levant. At the same time he builds a parallel picture of the assassin and the psychoses that drove him to kill his king. The two narratives converge in true thriller style as Rabin seeks to salvage his ailing peace, and Yigal Amir, a misguided vigilante inspired by the fictional Jackal, seeks both the courage and the opportunity to do the unthinkable.

Ephron’s writing and pacing are superior, and his journalistic efforts are laudable, but he lets his own political viewpoint color the narrative. Despite the level of detail, he is selective in his presentation of the facts. He presupposes the superiority of the Labor party position and treats the hypothetical future of the Oslo Peace Process with undue optimism. These biases cause the text to lean severely to the left.

Ephron casts Rabin as an everyman saint, quickly glossing over the sins that made him impossible for Palestinians to accept as a peace broker and failing to even mention the public calls for beatings and broken bones in the occupied territories that had defined him as a defense minister. He casts Arafat as a sincere, if bumbling partner in the peace process, ignoring the characteristic double dealing that made him equally unfit as a peacemaker. He mentions Arafat’s call for jihad in Jerusalem within days of the Gaza-Jericho agreement, but then appears to take Arafat’s word that his intentions were misunderstood.

Alongside these omissions, he casts the political right as one giant villain in the story. Certainly there are extremists who share the blame for encouraging Amir, and Ephron brings them to light, but his narrative disdain for the Likud and the Orthodox community is far too sweeping.

Ephron’s optimistic view of the Oslo Accords and their architects can be summed up in one overreaching statement from his text. In covering the Labor Party’s loss of the post-assassination elections, he has this to say:

“Among the Oslo originators, Yossi Beilin felt particularly crushed. His draft agreement with Mahmoud Abbas, which might have resolved the conflict with the Palestinians for good [emphasis added], was now a dead letter.”

To imply that Yossi Beilin and Shimon Peres, after years of failure and increased violence, had finally solved the unsolvable, only to have their peace snatched away by the evil right, is a significant stretch.

Killing a King is a well-written journalistic thriller that deserves a high place in any library covering the period. It is both informative and intriguing, and the volume of new material makes it a valuable resource; however, readers studying Rabin or the Oslo Peace Process should seek additional works to find balance.