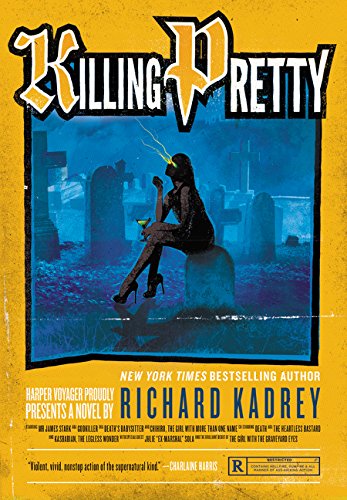 Richard Kadrey’s seventh novel in his urban fantasy Sandman Slim series puts his protagonist, James Stark, right into the thick of a yet another possible end of the world event: the attempted murder of Death.

For those unfamiliar with the previous six novels in the series, this may sound like a reach for a premise. But for those that have been faithfully following James “Sandman Slim” Stark as he smokes pack after pack of Malediction cigarettes, takes shot after shot of Aqua Regia, and beats, bloodies, and flat out kills anything that gets in his way, then the appearance of a half-murdered Death will seem fairly tame.

While an excellent addition to the series, Killing Pretty is not the grand apocalypse looming tale that previous story arcs contained. It is more of a fantasy homage to the classic L.A. noir detective novels of times gone by.

And that is exactly where Killing Pretty succeeds. Kadrey’s Sandman Slim novels have always flirted with the noir, nodded a how do you do to the greats like Raymond Chandler and Elmore Leonard, given a snarky middle finger to those old tales of Hollywood’s seedy underbelly. But in Killing Pretty, Kadrey flat out embraces the genre, taking the series from urban fantasy to fantasy noir by turning Stark’s never join the working class anti-hero into a full fledged private dick. Not that the character has had a problem embodying the latter of that colorful moniker.

From the dark clubs of L.A.’s vampire scene to the bloody secrets of Laurel Canyon, Kadrey sends Stark into deeper and deeper mysteries when the heartless body of Death tracks him down and begs for his help. Literally, Death is heartless, having had that organ ripped out in ritual sacrifice.

Stark, being the half-angel, half-human, all monster that he is, can’t resist the temptation to crack some skulls, piss off the powerful, and tear apart the scum that hide in the shadows of L.A.’s “normal” social order.

Kadrey’s knowledge of the noir genre, as well as his obvious knowledge of avant garde cinema and B movie classics, peppers the novel, adding the personal spice that has become a signature of the author’s style.

Sarcasm, violence, blood, wit, and social commentary keep the reader engaged and the story moving, making Killing Pretty yet another wonderful addition to a series that is more than the usual urban fantasy cliche of cloaked wizard in a rain soaked street atmosphere.

In the Sandman slim novels the reader can feel the heat of L.A., smell the smog, tastes the carnitas and tamales, and know the joy of finally sliding into the AC and onto that barstool at the end of a brutal, bloody hard day of searching, fighting, killing, and just plain old surviving.