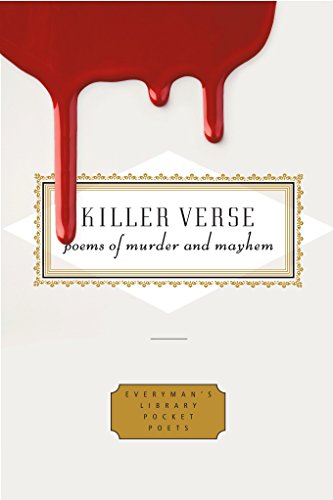 “The virtuous man is content to dream what the wicked man actually does.”
—Plato

A book with this title and no poems by Edgar Allen Poe is suspect. If you can include Robert Browning, Thomas Hardy, W. H. Auden, Stevie Smith, Mark Doty, and Carol Ann Duffy, surely there’s room for “Annabel Lee.”

The poems are arranged in broad swaths from All in the Family (poems on Cain and Abel and Lizzie Borden) to Noir to Psycho Killers to Victims. Poems written from the killer’s point of view are not as interesting as those from the victim’s. Seven of the poems in the Murder Ballads section are by Anonymous, showing us the endless insatiability of our appetite for recounting bloody deeds.

My favorite may be “Fart” by Roger McGough. It does one of the major jobs of poetry: makes you want to read more. After you read that first stanza:

How could you not continue to read?

The Death of Eugene Aram by Thomas Hood (1799–1845) is a mini novel, based on an actual person. Aram was accused of the murder of his friend Daniel Clark, but there was not enough evidence to convict him. Aram went away to London, and while he left his wife behind, guilt traveled with him.

“Then down I cast me on my face,
And first began to weep,
For I knew my secret then was one
That earth refus’d to keep:
Or land or sea, though he should be
Ten thousand fathoms deep.”

It did take 14 years for Aram to be caught, but then events moved swiftly. Three days after he was convicted, on August 6, 1759, Aram was hanged. The next day his body was brought back to the scene of the crime, where it dangled in chains and left to rot.

Poetry books cry out for concentrated pondering and repeated reading and thinking about one poem before moving to the next. If you pick up this slim volume, you will be fully satisfied by this foray into a world of turmoil.