Kids' Cakes from the Whimsical Bakehouse: And Other Treats for Colorful Celebrations 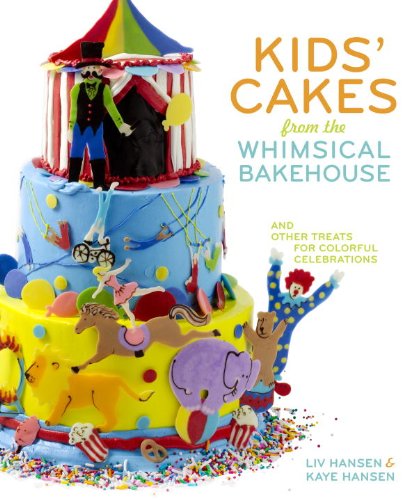 In the competitive world that is kids’ birthday parties, Liv and Kaye Hansen can help any mom stand tall. Their Westchester, N.Y., bakery, Riviera Bakehouse, boasts boldly colored (surely an understatement), topsy-turvy cakes, many of which are easy enough for home bakers to attempt.

Some of those cakes were showcased in their first book, The Whimsical Bakehouse, and readers hoping for more inspiration will be glad to see another book from this mother-daughter pair. Those readers need to pay extra attention, though, to the subtitle of this book, noting the “and other treats” part.

Kids’ Cakes offers ideas for eight themed parties, including an “enchanted tea party,” a sleepover, and a circus party. Thus there are just 13 finished cakes, including a cheesecake. The book also offers some decorated cupcakes and cookies, chocolate shells to fill with pudding, flan, brownies, pancakes, and cinnamon bread for French toast.

Trendy cakes these days often get covered in fondant, which forms a beautiful, smooth shell. Fondant’s utter lack of flavor, though, means diners usually peel it off to get at the cake underneath—which will have just a bare covering of the buttercream frosting most people want. The Hansens believe all parts of a cake should be edible, so they generally ignore fondant in favor of decorations made either of frosting or melted wafer chocolate. Wafer chocolate, also called confectioners’ chocolate, compound chocolate, or chocolate coating, isn’t real chocolate because it lacks chocolate liquor and replaces cocoa butter with vegetable oil. Real chocolate must be tempered—a somewhat fussy process in which it gets melted, cooled, and slightly reheated—so that it stays shiny and firm after setting up, but not wafer chocolate. It can be melted, tinted with food coloring, and piped, poured, and brushed into designs.

Using it, the Hansens produce all sorts of edible, fanciful decorations, from simple hearts to circus horses to a detailed reproduction of a child’s portrait. Kids’ Cakes gives full directions and templates for all of those; non-artists may want to avoid the portrait, but the rest are less intimidating, and many require little more than an ability to trace a simple drawing with a pastry cone instead of a pencil. A host of animal faces for cupcakes, for example, come together fairly easily in melted chocolate, far easier than trying to pipe the details directly onto a cupcake in frosting,

The book does, to the authors’ own surprise, offer a recipe for marshmallow fondant to use in one recipe. If a cake forces you to use fondant, marshmallow is the way to go for ease and slightly better taste, and the Hansens offer a standard recipe (though without offering the far easier option to knead the fondant in a stand mixer than by hand). The cake and filling recipes are fine, if not especially exciting; experienced bakers will likely use this book more for decoration ideas than recipes. Sugar cookies, for example, could use a flavor boost, and many bakers will cringe at the buttercream recipe that uses high-ratio shortening (useful because it produces more vivid colors, but many bakers may choose to stick with the Italian meringue buttercream at the expense of color). The authors provide nice tips throughout the book, such as good advice on immediately using their tasty cookies and cream filling (Oreos folded into stiffly whipped cream) so it doesn’t collapse, and “kids can” sidebars that note where children can help.

An emphasis in the introduction on not getting hung up on the details should come as a welcome reminder that these are, after all, cakes meant to be eaten. Too much time spent looking at cake books that focus on fondant and other inedible decorations will intimidate most home bakers; these photos are beautiful, but you can still see where the spatula swept across the icing. All is not perfection, and for most bakers, that will be the most perfect recipe for success.