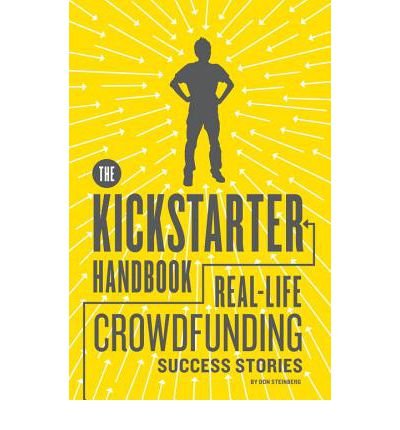 “The Kickstarter Handbook should be read by anyone contemplating a Kickstarter campaign.”

This review is something different.

It will be written in two parts. The first is a conventional review of the book.

In the second, later this year, we will bring the book into the laboratory:

But just what is Kickstarter?

It’s a “crowd-funding website” where for profit projects in the arts can gain funding. Yup, creative capitalists receive donations from visitors to the site. Perhaps not yet a household name, Kickstarter has “gone viral.” And The Kickstarter Handbook is the first truly bona fide book on this web phenomenon. (There is a handful dubious of ebooks rushed to publication, mostly selling for a few dollars.)

So what’s the Kickstarter catch? None. But there are a few noteworthy rules and terms for receiving funds pledged that are noteworthy. First, one must provide “rewards” to those who donate. Kickstarter projects do not ultimately fund unless pledges equal or surpass the dollar goal. And of course, Kickstarter is for-profit and takes 5% of the funds raised by a successful project into its own coffers and another 3–5% goes to Amazon for processing donation payments.

What are author Don Steinberg’s qualifications for writing this book? He’s not an online guru. His last book was America Bowl: 44 Presidents vs. 44 Super Bowls in the ultimate matchup in which chapters compare one president to one Super Bowl game. He is also a professional journalist who has published in respected print magazines and newspapers. Online guru or not, based on the content between this books covers, it’s clear that Mr. Steinberg is an outside-the-box thinker (as implied by his last book) who brings an experienced journalist’s discipline to both the research, analysis, and writing of The Kickstarter Handbook.

Mr. Steinberg is thorough in covering all aspects of a Kickstarter campaign, a venture he makes clear is no small undertaking if one is to successfully fund. “For the month or so that your Kickstarter campaign lasts, it can be a relentless, all-consuming effort, one in which you are required to ask loved ones and casual acquaintances and total strangers for money, begging desperately for donations, and then just maybe begging some more.”

Don Steinberg states outright in his introduction that “Chapter 1 is meant, in part, to scare you . . .” as no one sufficiently prepared or committed is likely to succeed on Kickstarter; a bit less than half the projects on Kickstarter do succeed.

The Kickstarter Handbook methodically covers all aspects of the Kickstarter process from the preparation stage to successful, funding and fulfillment of rewards. The book is a sobering tool advising the reader on how to come up with the “magic number” that is your funding goal. There is also considerable attention to the reward requirement. Many a Kickstarter project that went viral created a massive, overwhelming reward fulfillment project in itself for successful funders. Others failed to take into account the full cost of fulfillment, effectively wiping out most profits or even taking a loss on a project due to reward cost. These examples provide critical insight for anyone kickstarting.

Other lessons include the importance of not simply hanging a shingle on the Kickstarter website, but in preparing one’s network of potential donators as well as other means to optimize visibility of a project, the fundamental importance of creating a compelling video for a project, as well as a number of case studies that underpin much of the advice proffered. A final chapter profiles a number of funding alternatives to Kickstarter.

If the Internet is still the Wild West—and it is—then Kickstarter is a renegade trading post that continues to morph as its unconventional, raucous following grows.

No doubt there will be more books, maybe even better ones written about Kickstarter. Until one comes along—if indeed a better one does—The Kickstarter Handbook should be read by anyone contemplating a Kickstarter campaign. Wed the lessons of this book to the unique creativity that most in the arts possess and chances of success increase exponentially. This creative element is often, when properly executed, the make-or-break factor—fitting in light of Kickstarter’s focus on the arts.

Ted Sturtz is founder of New York Journal of Books. He is an entrepreneur as well as the architect of the unique technology, once built and deployed, that will enable NYJB to provide for free more detailed professional reviews than any other source.