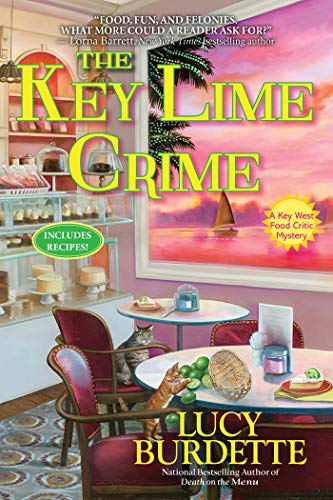 “This is a perfect mystery for summer beach reading—or for motivating yourself to plan a Key West vacation—as long as you can stay clear of the business end of a chef’s knife or heavy-duty rolling pin.”

Lucy Burdette’s Key West Food Critic Mysteries feature Hayley Snow, a “food critic and frantic foodie fanatic,” and The Key Lime Crime is the tenth in the series: packed with cuisine-related arguments, Key West traditions and festivals, the tang of romance, and always a well-motivated criminal willing to ignore friendship for the sake of, say, money or revenge. Although the books are presented as recipe cozies, they are solid traditional mysteries underneath the delicious details.

This time, Hayley’s still a newlywed. She’s finally married the hunky police officer she’s longed for, Nathan Bransford, and they’ve worked out, more or less, how far out of her food critic role she’ll reach when motivated to pry into a crime. Now it’s the week between Christmas and New Year’s, so Key West is packed with vacationers eager for a good time. For Hayley in her journalist role, that means covering a key lime pie competition arranged by one of the noted chefs on the island.

Ask anyone familiar with Key West and they’ll assure you that there seem to be unlimited variations on the recipe for key lime pie. There’s the controversy over meringue or whipped cream, the preference for pastry crust or tart crust or a graham cracker version, and Burdette’s culinary curiosity adds even more ways to make the dessert rich and zesty.

Of course, when murder happens, it’s related to the pie competition. Hayley certainly knows better than to get involved with investigating this. But an unexpected factor has entered her life: Her mother-in-law, who couldn’t make it to the wedding (because she was prepared to hate Hayley?), arrives with hardly any notice, and instead of staying placidly at home with Hayley’s own folks, Mrs. Bransford hops into Hayley’s scooter with her and in every way possible partners up on sleuthing into the bakers and their confections. Hayley’s astonished when this leads to signing up for a pastry course for the two of them:

“’I didn’t know you were interested in baking,’ I said, once we were back on the sidewalk.

“Mrs. Bransford laughed. ‘Not at all. But I didn’t believe for a moment that she did not know Claudette. Her shop is only one block from the French place. She admitted she knew the woman wasn’t Parisian, and I suspect there was lots more she could say. I figured we’d hear more over an hour while keeping our hands busy in the class. She struck me as the kind of woman who was bursting to gossip if given the right opportunity.’

“I stared at her, impressed. That was exactly what I was thinking.”

While Hayley and her mother-in-law chase motive, means, and opportunity, of course they run afoul of the actual murderer(s), and there’s a highly satisfying and kitchen-related scene of danger and disaster. At stake the entire time, and adding to the suspense, is the issue of whether Hayley will be accepted by Mrs. Bransford. When she finally figures out her mother-in-law’s own motivations, she discovers multiple secrets that need airing, and realizes she’s still a newbie in getting to know her spouse.

Trust Burdette to pack the back of the book with tasty recipes, too, from hors d’oeuvres to a key lime parfait. This is a perfect mystery for summer beach reading—or for motivating yourself to plan a Key West vacation—as long as you can stay clear of the business end of a chef’s knife or heavy-duty rolling pin.