Kepler and the Universe: How One Man Revolutionized Astronomy 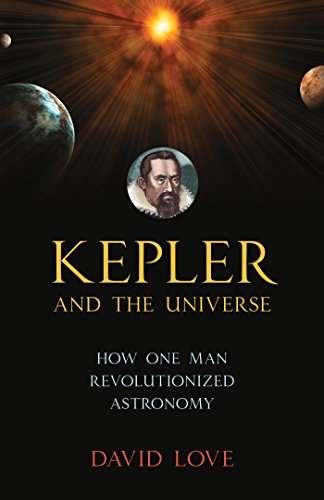 Kepler and the Universe by David Love is an interesting, informative, and exciting book—especially if the reader has an interest in science or wants to know more about the famed scientific explorers of the latter part of the 1500s and early 1600s.

As is the case of most scientific or mathematical books, people want reassurance that the author is truly qualified to write the book. David Love is well qualified for this task. He holds a Bachelor of Science (BSc) with Honors Degree in Astronomy from University College London. University College is London’s premier multidisciplinary research university. It has a strong international reputation for the quality of its research and teaching. Finally, Love is also a member of the prestigious Royal Astronomical Society.

The author provides an informative introduction to his book. In it he discusses the development of astronomic thought. His discussion of the contribution of the ancient Greeks is important especially with regard to the pages devoted to Ptolemy. Ptolemy developed a strong argument for the notion that the earth was the center of the universe. This idea was essentially unchallenged until the publication of Nicolaus Copernicus’s work De Revolutionibus just before his death in 1543. In his book Copernicus challenged Ptolemaic thought and laid out the argument that the sun is the center of the solar system and not the earth.

Then in 1551 Erasmus Reinhold published his Prutenic Tables. These tables enabled astronomers to predict planetary positions. Due to their accuracy they replaced the Alphonsine Tables that had been in use for over 300 years. The secondary effect of the new tables was to make Copernicus’ work known to a much wider audience.

This created a number of problems, especially for the Roman Church. First the Ptolemic assumption was a critical component of Roman Church doctrine at a time when the church could least afford another problem. The Ptolemaic system was simple and straightforward at a time when simplicity was essential to the established order; unfortunately the author does not provide the reader with the rest of the context although he does mention Luther and John Calvin without discussing the influence of the Reformation in Europe.

Additionally, the author does not mention either the political or social climate during this period. For example, the Ottoman Empire was expanding its influence throughout the Mediterranean and the Balkans. Europe itself was in political turmoil not only because of the rise of Protestantism, but because of issues between Spain and the Holy Roman Empire. And as if that was not enough there was a renewed conflict between the Roman and Orthodox Churches.

Socially, Europe was recovering from the plague of 1563. This plague would revisit parts of Europe again in 1589, 1603, 1625, and 1636. These plagues along with the other situations mentioned had a tremendous economic impact of Europe.

In the foreword to the book, Richard S. Ellis, Steele Professor of Astronomy at the California Institute of Technology, states that the period covered by the book is “a crucial component of the European renaissance of thought. And no revolution in thinking could be greater than the changing perception of our place in the universe.” Thus at a time when straightforwardness, simplicity, and order were needed Western Civilization was faced by an additional challenge: a new awakening.

Perhaps, in many ways it is unfortunate that Kepler lived, thought, discovered, and wrote when he did for history has been rather unkind to him. For some reason he has been over shadowed by Tycho Brahe, Galileo, and Sir Isaac Newton. But were it not for Johannes Kepler perhaps those three individuals would not be considered the giants that they are today. Fortunately for us, David Love and his account of Kepler and his pioneering achievements elevates him and his genius to where he ought to be in the world of scientific thought.

Love tells us early on that Kepler embraced Copernicus’ idea that the sun was the center of the universe. At that time the only plants known were Mercury, Venus, Earth, Mars, Jupiter and Saturn. The author tells us that early in his, Kepler’s, research “three astronomical problems puzzled him: Why were there only six planets? Why were they at the distances that they were from the sun? And why did they move more slowly in their orbits the further they were from the sun?”

These three questions were both a help and hindrance to his work. The first two inspired him but were not important. The third one served as the basis for all his future work. He realized that all the planets rotated around the sun on the same plane and as a result they could be plotted rather easily.

In developing his plot diagrams he made a major discovery and at the same time a major mistake. He noticed that there were times when planets seemed close to each other. This discovery he labeled conjunctions and that term remains with us today. His error he was that in diagraming the rotational patterns around the sun he began looking for patterns were there were none. This mistake hindered his work until he finally realized that he had to revisit his own theory and work his way through his basic assumptions.

People have a tendency to see patterns, or interpret factors that fit our experiences or harmonize with our preconceived notions. In short we tend to see what we expect to see. All too often we misinterpret the data. As a result we sometime make faulty assumptions or poor decisions. In spite of evidence to the contrary we tend to hold on to these misconceptions. The author does a superb job of explaining to us how Kepler worked through his mistake and rectified it.

Kepler worked in Brahe’s laboratory as his closest assistant; however, Brahe did not share all of his observations gathered over 38 years with Kepler about the positions of Mars as it worked its way around the sun. Kepler needed to analyze these observations and was determined to do so. Although Brahe’s calculations were not as precise as they would have been had a telescope been available they were extremely accurate and thus critical to the field of astronomic science.

Brahe’s heirs, primarily his son-in-law Tengnagel von Campp, wanted all of this material, too. The tug-of-war between the two was eventually resolved. It took Kepler almost eight years to interpret all the material and write the 600-page work Astronomia Nova, The New Astronomy. It was published in 1609, a year after Hans Lippweshey invented the telescope. This book is considered one of the most important books ever written in the history of astronomy. Among its contents are the planetary eccentricities of Mercury, Venus, Earth, Mars, Jupiter, and Saturn, and Kepler’s three laws of planetary motion. Love presents this sequence of events in a remarkably understandable manner.

Love then discusses the rest of Kepler’s work, which naturally follows his findings recorded in Astronomia Nova. In addition Love discusses Kepler’s interactions with Galileo and their combined influence on Sir Isaac Newton.

At this point it might be worth asking several “What if?” questions such as: How would the world be different if Johannes Kepler did not appear on the world’s stage when he did? If Kepler and von Camp had not reached an accommodation with regard to Tycho’s observations would they have been locked away never to be seen again? Would Kepler still have been able to develop his three laws of planetary motion without Brahe’s observations? If so, how long would it have taken him to do so? If not, would someone else have developed them? How much time would have to pass before this was done and which scientific discoveries would have been delayed? We do not know the answers to any of these questions.

Love never asked these or any other “What if . . .” questions. And there is no reason that he should have done so. Nonetheless some readers probably would be curious.

In 1627 Kepler published the Rudolphine Tables, which were partially derived from some of Brahe’s observations. The author tells us these tables consisted of a star catalogue and planetary tables. These tables enable one to compute the position of planets. Two such predictions included were the transit of Mars and Venus between the earth and the sun. In 1631 Pierre Gassendi observed the transit of Mars and in 1639 Jeremiah Horrox observed the transit of Venus thereby proving the accuracy of the Rudolphine Tables.

Love concludes this remarkable work by highlighting the influence of Kepler’s work on others. These include Galileo, Sagan, Jacob Bartsch, and Newton among others. Interestingly Kepler’s presence is still felt today and justly so. We are truly fortunate that Kepler lived when he did. David Love does a fine job in presenting to us Kepler’s greatness.