Kennan: A Life between Worlds 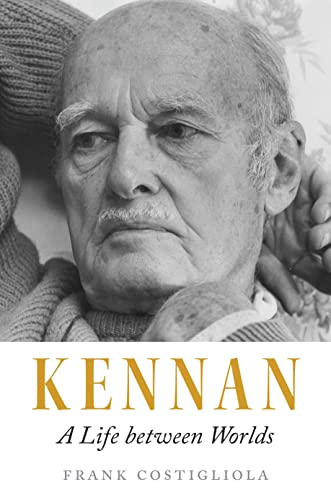 “Costigliola . . . takes a psychological approach to Kennan that seeks to find clues to Kennan’s foreign policy views and career by relating them to Kennan’s inner emotional struggles.”

The American diplomat and historian George F. Kennan lived a long life (he died in 2005 at age 101) that was full of contradictions and complexity. Kennan was remarkably introspective and at times an emotional basket case. According to Connecticut University professor Frank Costigliola in his new biography Kennan: A Life Between Two Worlds, Kennan suffered from hypochondria, depression, insecurity, and many physical ailments. His personal and family life were complicated. He was an American who at times liked his own country less than he liked Russia.

Costigliola is the editor of Kennan’s voluminous diaries, which were published as The Kennan Diaries in 2014. He considers Kennan a “flawed genius” who first contributed to the militarization of the Cold War in the mid-to-late 1940s with his assessments of the Soviet threat and recommendation of the policy of containment, then spent much of his career as a diplomat and scholar trying to ease relations between the United States and the Soviet Union. As Costigliola writes, “The greatest tragedy in the life of George F. Kennan arose from his most famous success.”

Costigliola is not the first Kennan biographer to see the many paradoxes in George Kennan’s life and career. Indeed, much of this material was previously covered by Kennan’s authorized biographer John Lewis Gaddis in George F. Kennan: An American Life (2011). Unlike Gaddis, however, Costigliola, perhaps due to his work with the diaries, takes a psychological approach to Kennan that seeks to find clues to Kennan’s foreign policy views and career by relating them to Kennan’s inner emotional struggles.

Throughout the book, the author portrays Kennan’s personal and professional life as a struggle between the “compelling pulls of Civilization and Eros.” Kennan was an enthusiastic student of Freud. And while he remained married to his wife for nearly 75 years, he had several affairs. He loved his children, but one of them later remarked that “the welfare and ease of [his] children was not of paramount concern” to him. He claimed to care about the common man, but distrusted democracy and thought that “superior” elites like him should rule. Kennan also exhibited some of the common racial and other unseemly social attitudes of his generation, and Costigliola is unsparing in his criticism of Kennan for those views.

Kennan’s diplomatic career began in the late 1920s, when as a young Foreign Service Officer he was assigned successively to Geneva, Hamburg, Berlin, Tallinn, Riga, Berlin again, and once more to Riga. In 1933, Kennan was brought to Moscow by Ambassador William Bullitt after President Franklin Roosevelt formally recognized the Soviet government that had seized power more than a decade earlier in October–November 1917. Kennan saw firsthand the brutality and ruthlessness of Stalin’s regime. Costigliola believes that this experience would color Kennan’s views after the Second World War.

Kennan was not a fan of FDR, but Costigliola is, claiming that FDR practiced shrewd realpolitik in his dealings with Stalin. Costigliola’s position is hard to sustain given the record of Roosevelt’s diplomacy during the Second World War—especially toward the end of the war—and his seeming indifference to communist infiltration of the Executive branch in the 1930s and 1940s. The late Robert Nisbet was closer to the truth when he characterized FDR’s relationship with Stalin as a “failed courtship.” That was Kennan’s view, too.

Costigliola shows that Kennan’s influence on American foreign policy resulted from two famous papers he wrote in the early years of the Cold War: the so-called Long Telegram in February 1946, and an article in the journal Foreign Affairs under the pseudonym “X” titled “The Sources of Soviet Conduct” in July 1947, and policy documents he prepared while working in the State Department. The two famous papers are the intellectual seeds of the containment doctrine that guided U.S. foreign policy throughout much of the Cold War.

The author is critical of both papers and accuses Kennan of being responsible for exaggerating the “Soviet threat” (which Costigliola invariably places within quotation marks). Kennan himself, almost immediately after the “X” article appeared and was linked to him (he was then director of the State Department’s Policy Planning staff), began to distance himself from the more vigorous aspects of containment, claiming that his work was misinterpreted. And while Kennan formulated the aid package that became known as the Marshall Plan, he opposed the formation of NATO and argued for mutual disengagement from Europe by the United States and the Soviet Union. He soon lost influence among U.S. policymakers.

Out of government, Kennan wrote impressive works of history and continued to opine on international relations and U.S. foreign policy.

In his personal life, Kennan bought a 200-plus acre farm near the town of East Berlin in south central Pennsylvania. Costigliola writes that the farm is where Kennan found solace from the pressures of the Cold War. There for a good portion of the rest of his life, he retreated from either Washington or Princeton (where he worked at the Institute of Advanced Study) to mix physical labor with contemplative writing. He also opened the farm to Stalin’s daughter Svetlana Alliluyeva when she “defected” to the United States in 1967.

Costigliola notes that Kennan manifested a significant alienation from American society. And this gradually affected his Cold War outlook. In some of his writings, Kennan suggested that the United States could only successfully meet the Soviet challenge if it looked inward and corrected its own failings, much as he saw the need to correct his own personal failings. In the 1950s, some of Kennan’s policy proposals met with greater receptivity in Moscow than in Washington. In the 1960s, he became an outspoken critic of the Vietnam War, not on moral grounds, but based on his foreign policy “realism.” In the 1980s, he blamed President Reagan for making the Cold War more dangerous and refused to give Reagan any credit for winning it.

In the 1990s, Kennan publicly opposed the expansion of NATO, rightly predicting in a piece in the New York Times that it would revive within Russia militaristic and imperialistic tendencies—tendencies we have watched play out in Georgia in 2008, Crimea in 2014, and now in the rest of Ukraine. He also opposed America’s wars in Afghanistan and Iraq after the 9/11 terrorist attacks. Unfortunately, U.S. policymakers ignored Kennan’s advice.

Costigliola’s final verdict on Kennan is that he was a great diplomat and strategist who tried to reverse America’s Cold War attitudes that he had helped create, but that his greatness was marred by his prejudices and emotional struggles. It is a verdict, however, based on the author’s own questionable revisionist views about which side was to blame for the Cold War and who should get the most credit for ending it.