The Kelloggs: The Battling Brothers of Battle Creek 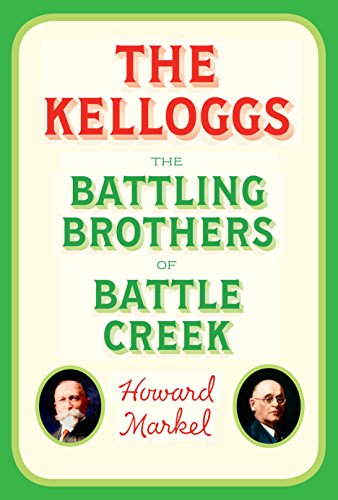 "This book is an engrossing adventure about the rise of midwest America."

"More then 350 million people devoured a bowl of Kellogg's corn flakes" on any morning. As with Graham Crackers and Coca-Cola, this most famous cereal began as a health treatment. Dr. John Harvey Kellogg invented it in 1875.

Kellogg set out to find new ways to health from his family's deadly experiences with the quackery that passed for medicine on the Michigan frontier. He went on to achieve international notoriety.

The doctor even received a nomination for the Nobel Prize for his work in nutrition. Today, however, many people would consider his "theories to be quaint, if not outright wacky" according to author Howard Markel.

With his younger brother Will Keith, John built a health empire. It came to include a publishing house, professional training, new technologies, cooking, an internationally celebrated spa, and much more.

The Kelloggs, however, "hated each other's guts" and were "the Cain and Abel of America's heartland." Markel explores their lifetime of imagined and real slights made worse by their success in The Kelloggs: The Battling Brothers of Battle Creek.

John was the oldest son, their mother's sickly favorite, brilliant, uncompromisingly arrogant, an idealist, and successful except in business. He "exuded waves of charisma, good cheer, eloquence, showmanship, and clinical reassurance."

Will made lasting achievements in business. He developed an industry of food "cooked shaped, chemically manipulated, mass-manufactured products," and he also "revolutionized the administration of the modern medical center." "Many of the industrial best practices he helped develop remain familiar parts of our daily landscape and lives."

The Kellogg brothers should have made a match in Heaven. Will was, however, always John's little brother and was abused by his obsessive sibling. In 1906, he began to buy out John and, when he finally took over, built Kellogg into the hugely successful name-brand international empire known today.

John unsuccessfully took his brother to court over that success. Will acted no less vindictively and even missed his brother's funeral in 1943. The two men were naturally competitive, contentious, and of very different personalities, according to their sister.

"Relegating the Kellogg brothers' long, internecine warfare as a nasty sibling rivalry trivializes and obscures their epic drive, ambition, and genius," writes Markel. John was the great promoter who with his wife Ella helped to raise 42 children of different races. Will was the genius executive who left an $8 billion dollar foundation to help the neediest people.

This incredible story by itself would be sufficient for a book. Markel, however, goes much further to explore the "changes in social mores, belief systems, lifestyles, diets, health, science, medicine, public health, philanthropy, education, business, mass advertising, and food manufacturing . . . from the Civil War to World War II."

This book is an engrossing adventure about the rise of midwest America from the pioneering days of the Kellogg family to World War II with all of its failures and successes. Medicine, breakfast foods, and the Seventh Day Adventist Church are part of the story.

Will died in 1951 and lies near his brother in Oak Hill Cemetery in Battle Creek, Michigan. Nearby is the great civil rights champion Sojourner Truth but also Charley W. Post who made millions after taking "some of their most popular recipes" to create General Mills. The brothers "despised" him, too.