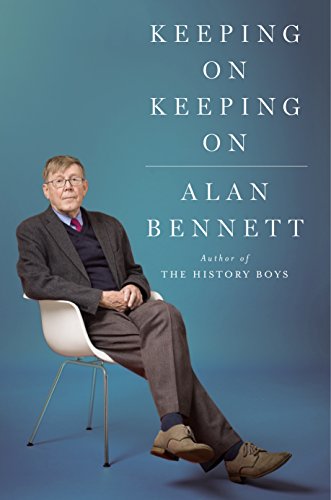 “To spend hours in this writer’s company as he records the days and years is to have an instructive and unfailingly urbane companion.”

Alan Bennett first earned attention as a member of the witty and literate British performance group, Beyond the Fringe, in the 1960s. Since then he has been indefatigably and impressively productive. His plays include such titles as Forty Years On, The Lady in the Van, The Madness of George III, and the Tony-Award winning, The History Boys (2006). His television series, Talking Heads, his screenplays and television plays, together with his charming novella, The Uncommon Reader, and such books as Smut: Two Unseemly Stories, have assured him a large audience and appreciative public.

But all along in private he has also kept a journal. Although he claims, “I am not a conscientious diarist,” these personal entries bulk large. Bennett’s two previous volumes, Writing Home and Untold Stories, have now been added to and extended by his diaries from 2005 to 2015, Keeping on Keeping on.

This paperback edition of the hardcover version published last year weighs in at over 700 pages, since it also includes speeches and memorial tributes to dead friends such as K. B. McFarlane and John Schlesinger.

There are articles on “The National Theatre at Fifty: What the National Means to Me,” scripts for Denmark Hill and The Hand of God and miscellaneous items such as “Nights at the Opera” and “Art and Yorkshire: From Turner to Hockney” and “The History Boys, Film Diary.” His campaign to save local libraries, “Baffled at a Bookcase,” his praise for the director, Nicholas Hytner, his Introduction to People and Foreword to The Coder Special Archive are all reprinted here.

But extracts from the journals make up two-thirds of the volume, and they are the meat of the meal. As Bennett writes in his Introduction, “Eschew the valedictory though one tries to do, anything one writes at this age is bound to be to a degree testamentary, with the writer wondering what of anything he or she has written will survive and for how long. I can’t say I much care since I shan’t be around to see it through.”

Now 84, the author offers a retrospective of his life in letters, and one to be savored at length. Like many other British writers trained in rhetoric at Oxford, he seems incapable of composing a clumsy or dull sentence. The temptation is to quote unstintingly from these journal entries; here is a very small sampling:

• 18 March (2005) “That there should be an etiquette on the scaffold (tipping the headsman etc.) says everything about human beings, their savagery and their delicacy.”

• 10 February (2006) “Letters, letters, all praise not a breath of criticism and yet the feeling is of being pelted with small stones—fame a species of pebbledash.”

• 11 August (2007) “On Saturday the Guardian is running a series on writers’ rooms. Why any writer allows him or herself to be prevailed on to take part I’m not sure. Flattered to be asked, perhaps, though what would deter me would be, if nothing else, superstition: to allow a newspaper to photograph my desk runs the risk of never being able to do any more work there. None that I remember have been inspiring or even particularly pleasing: Colm Toibin’s today is all books, though said to look over rooftops, which could be nice; Margaret Drabble’s faced the street, but with curtains so long and John-Lewis like I’d be frightened they’d get into the prose; Edna O’Brien’s had some relics of Samuel Beckett, hardly likely to unchain the imagination or get the words flowing. Most have had awful fireplaces. Can we see where you work? No fear.”

Most of the entries are longer and less quotable—a mixture of recollection, scenes observed and retained for possible use, a listing of personal ailments, meals eaten, incremental deafness, friendships established or lost.

There’s a good deal of political outrage and alarm at the British government’s agenda and the United States’ war-mongering; there’s distrust, throughout, of politicians and sloganeering and cant.

Bennett remains an outspoken advocate of the downtrodden and working-class poor—grateful to his formally uneducated parents who sent their sons to school. He himself attended school for free in the city of Leeds, then made his way to Oxford and, soon enough, the theater.

Although there are many famous names listed in these pages, the truly vivid sketches portray the little known. So though we meet Judi Dench, Tom Stoppard, and the Dowager Duchess of Devonshire, the figures who take center stage are the local butcher or neighbor or a “donkey who never recovered from the death of her mate . . . One of the real regrets of my life is that I have never kept a donkey.”

At times his self-deprecating attitude can seem falsely modest and even a bit of a pose. “Robert Hanks, the radio critic of the Independent, remarks that personally he can have too much of Alan Bennett. I wonder how he thinks I feel.” (18 October, 2005) A writer of fiction or plays and screenplays must bring characters to life—fleshing them out sufficiently so that they gain autonomy both on the page and stage.

But a diarist has only one intended member of an audience: the self. (At least until and unless the writer understands beforehand that the work is likely to be published—which Bennett knows and knew.) So there’s a way in which these pages feel like private discourse, and we the readers are, if not Peeping Tom’s, eavesdroppers—overhearing Bennett’s ruminations on marriage to his partner, Rupert Thomas, his preference in jam and wine, his pleasure in classical music and Italian art . . .

Pleasure is the operative word as one turns and turns these pages. To spend hours in this writer’s company as he records the days and years is to have an instructive and unfailingly urbane companion. As he observes of Nicholas Hytner, “His rehearsals are sometimes lessons; they are never lectures.” And to read these “lessons” is to hope that Alan Bennett will keep on keeping on.