Keeping Family Secrets: Shame and Silence in Memoirs from the 1950s 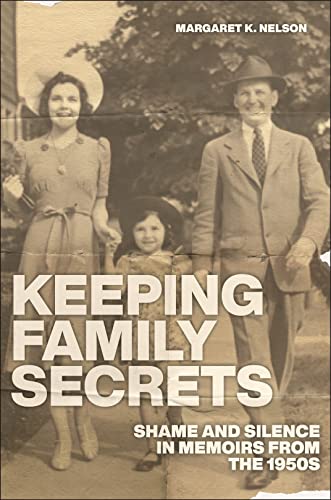 “food for thought as to how much things have changed, and how much they have stayed the same, or in some cases appear to be returning.”

In Keeping Family Secrets: Shame and Silence from the 1950s Margaret K. Nelson analyzes “family secrets” in the period stretching from the end of World War II “to the social transformations that emerged in the 1960s.” She sees this as the period when the Standard North American Family or SNAF—which she characterizes as nuclear, heterosexual and relatively isolated from extended family ties and often from the larger community—came into being and became the cultural ideal.

Government policies relative to housing, employment, health, taxation, family allowances all conspired to support this ideal. Ideally the SNAF prescribed clear and different gender roles with a male breadwinner and a female homemaker though these ideals were not always appreciated or respected. Between the 1930s and the 1950s married women’s labor force participation continued to rise in defiance of this cultural ideal.

It is surprising in this part of her discussion and elsewhere that Nelson does not reference Betty Friedan’s 1963 classic The Feminine Mystique, which analyzes in detail the efforts made by the US government and commercial interests to send women back into the home after the war and to allow men returning home to get their jobs back. The so-called Feminine Mystique glorified homemaking and child-rearing; the pro-natalist policies of the government were reflected in the baby boom.

For Friedan and others, it seemed obvious that educated but underemployed and undervalued women would create pathologically infantile and dependent children. “Imprisoned by the mystique women lived vicariously through their homes, gardens and children pushing their daughters into promiscuity and their sons into homosexuality.” And in fact two of the six “family secrets” addressed by Nelson concern same-sex preference between boys and pregnancies of unmarried daughters.

The remaining secrets which Nelson sees key to maintaining the appearance of conformity to SNAF in the period under review, relate to institutionalization of disabled children, engagement in left-leaning or communist organizations, the adoption (or sperm-donor conception) of a child, and the Jewish ancestry of one or more family members.

The actual possession of secrets was naturally shared unevenly among family members, and evolved over time as for example when parents decided eventually to tell their children that they had another sibling in care. Some secrets such as same-sex preference could be known to all family members, and to the outside world, but never spoken of.

Nelson draws her data from a large number of memoirs, the titles of which are presented helpfully in a text box in the concerned chapter. She distinguishes between memoirs that reflect on the childhood secrets kept, and those that focus on the consequences of the intended or otherwise revelation of those secrets.

As she acknowledges the vast majority of her memoir writers are white and middle class. She considers that this may reflect on the fact that in the 1950s this category of US citizens was most concerned with maintenance of the SNAF ideal and indeed its standard bearers; she mentions in passing that African Americans, and Native Americans had different family structures (which may have allowed for easer absorption of the children of unwed mothers); as well as different capacity to resist government policies, such as the forced enrolment of Native American children in boarding schools.

It is unfortunate that the memoirs she used were not more diverse, but as she notes that “it is entirely probable that the world of publishing deems some stories more valuable than others.”

Probably the most interesting and successful chapter is The Presence of Absence: Growing Up with Institutionalized Siblings, and it is here that her material allows the most complete account of the construction and unravelling of the face-saving secret. But all of her chapters present food for thought as to how much things have changed, and how much they have stayed the same, or in some cases appear to be returning.