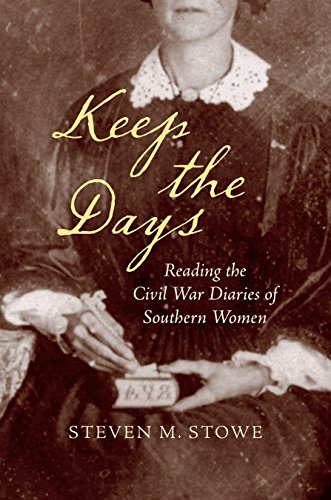 “Keep the Days tells the histories of these Civil War works as individual lives, social history, and literature, not as chronicles of battles, gods, and generals.”

Steven M. Stowe presents Keep the Days as an in-depth discussion of the interpretation and value of the published diaries of women in the Civil War South. The familiar such as Eliza Francis Andrews, Mary Chesnut, and Sarah Morgan appear here but also the lesser known such as Emma Holmes and Kate Stone.

Keep the Days tells the history of these Civil War works as individual lives, social history, and literature, not as chronicles of battles, gods, and generals. The book concludes with a valuable biographic bibliography of the writers and a discussion of modern scholarship in the field.

Stowe writes that the meaning of their words change with each generation and each reader. He argues that the "original manuscript [does] matter" and warns of the perils when an editor for publication will "streamline a woman's voice by cutting and polishing her voice."

Only one of these women, however, brought her diary to publication; the problems of interpretation due to editing receives considerable attention. Stowe avoided using false diaries like that of Cyrena Bailey Stone and memoirs like that of Sallie Clayton.

The author makes no claim of balance in the viewpoints of the writers in such a work: "this is a book about the personal diaries written by well-to-do white women" who "lived on wealth brought to them by the work of enslaved African Americans." These diarists "helped manage and preserve . . . a system of violent human bondage" and they later "worked to keep the Confederacy strong"; "they took hard its eventual wreckage."

Stowe writes throughout "in a personal voice" on how "empathy invites me to go a long way before I simplify, or discard, or pass final judgement on someone else's slant on things, even one I despise." But he adds that "empathy is not sympathy" and "we [should] never mistake her life for our own."

Sometimes "women shared their diaries with friends or husbands" but "these ladies did not write for us." Their genre "is writing more deeply felt than deeply considered" in "plain, absorbing, and contrary ways."

"They invite us to imagine and do not press us to be satisfied with passing judgement and moving on" and the diarist's subjectivity flows through her discoveries and satisfactions as a writer." How we read diaries "does not privilege the purposes of our time and place, our Civil War interests, our moral rightness."

"It matters that the diarists are women, not men." Males dominated the lives of these wealthy white privileged female writers who lived "in the ruling class, but [who were] ruled." "Men's ways had conjured up the war with well-spoken promises and undercover intentions."

"Some diarists" were "almost mute about slaves and the war." More often the diarists wrote of “slavery ending and ending.” These white diarists themselves had a change in quality of life that reduced them to the level of becoming their own ragged servants but they also gained independence through their wartime experiences. Clothes came to symbolize the changes in many ways.

The war remains generally only a backdrop in Stowe’s analysis of these publications. Born into rigid social norms, these women more than survived having no "stoves, salaries, choirs"; depredations and loss of all kinds; “Yankee insolence"; refugees; and "slaves disappeared or said no." Keep the Days explores these women "who became the authors of their lives just as their lives fell apart."

Stowe writes that "diaries are good guides in all of this" as they display honest feelings if not always an objective presentation of facts. "Diaries give us the words people used” and that can tell much such as ladies never referred to as "women" and servants never called slaves. "The diarists lingered over scenes and made them stories."

The author's first two chapters especially argue for the value of diaries but as individual sources in themselves instead of as "readers (and editors) want to skip around . . . to find pieces of the big picture." In a diary as a whole, "the shift in scale reveals the real but forgotten proportions of life in war and now we see actually see them."

The book has ink smudges for decorations to remember writing with quill pens and "the manuscript's folds, nicks, ink blots, erasure, doodles." It took extra effort on all levels to write anything and the later effort to get it in print "accessible, shareable, requiring no special handling." The result becomes "the pastness of a life—a ghost that lives in all texts—speaks strongly from her pages because she is so foreign."