Keep the Change: A Clueless Tipper’s Quest to Become the Guru of the Gratuity 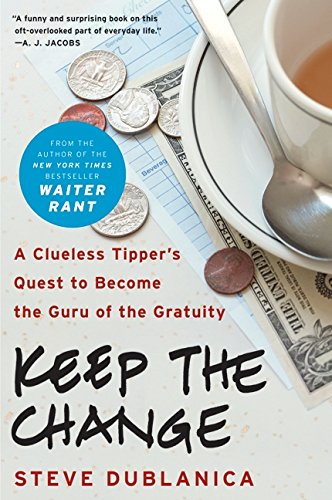 We all tip. By some estimates, Americans tip somewhere from $55 to $66 billion each year. Tipping constitutes about one penny for every two dollars of the gross domestic product. And over time, giving gratuities has become more pervasive in America. We tip when we pick up food ourselves, even when we buy cups of coffee. Soon one imagines that we’ll need to tip at the checkout in the grocery store when we buy the food and cook it ourselves.

Steve Dublanica became interested in the topic as a waiter, and in Keep the Change he chronicles his efforts to become a “tipping guru.” His journalistic research covers tipping for restaurants, hotels, parking, bars, coffee shops, tattoo joints, hair salons, movers, casinos, sex workers, exotic dancing establishments, bathrooms, taxis, shoe shine stands, and more. Given this wide variety of services and venues, you can begin to imagine how often we are supposed to tip.

One of the most interesting pieces of research on tipping cited by Mr. Dublanica suggests that there is very little correlation between the quality of service and how much people actually leave as tips. So why do we tip? Some of us may do so because we are strongly bound by the social contract that says we ought to. Others might tip to maintain an ongoing relationship with service providers: bribes and rewards.

We understand that most employees in services are paid somewhere between nothing and less than minimum wage. Businesses assume that their workers’ income will come from tips, and we customers play along with the system. The alternative, for most customers, would be to further impoverish their server. Service establishments do not make payment to the owners discretionary.

The author summarizes one or two articles by academic researchers and offers his own observations. And after reading his work, the reader is likely to have even more questions and observations about gratuities. Why is the service charge added to the bill in Europe, with a very small percentage left to the discretion of a customer? Why are there countries (Japan, for instance) where tipping is quite rare? And why are tips based on a percentage of the price of a meal? Wouldn’t it make more sense for customers to tip based on the time per person that customers spend at a table?

Keep the Change does not focus on the economic implications of tipping, but one gets the impression that the American system is clearly biased toward the interests of businesses. Restaurant owners (and others) employ serving staff at ridiculously low wages, in the expectation that patrons will voluntarily provide them with enough to live on. (Out of the tips, the server may have to “tip out” bartenders, assistant servers, and busboys; or the restaurant staff may pool all gratuities and portion them out based on various formulas). Your waiter now has a very strong incentive to sell you as much food and drink as possible. And you, the consumer, will focus on what economists call the “anchor price” in the menu. Who looks at a menu and mentally adds 30 percent for tips and taxes?

Workers agree to this arrangement because they have little choice. Very few restaurants offer to pay for profit-sharing arrangements. Tips are essentially profit-sharing bonuses that are paid by directly by customers.

And because the income from tips is way underreported to the IRS, many servers prefer to receive cash tips than taxable wages. They also prefer cash to credit card tips, which restaurants are likely to disburse in paychecks and report as taxable. (The only exception to this, the author found, is among strippers, whose customers tend to spend more when using credit cards).

Effectively, this means that WalMart can pay minimum wages, but servers may earn more after taxes. Cash tips in the U.S. have effectively taken the place of a sensibly progressive income tax policy.

Another reason that workers may agree to work for tips is the variance in customer behavior. Blackjack dealers would prefer you to bet $1 on their behalf (called a “toke”), rather than leaving a $2 tip. Given house odds, the two types of tips are equivalent, but dealers like to gamble as much as the rest of us. For waiters, who may get stiffed one day and then earn exorbitantly generous tips the next, this variance may explain why many would choose tips at the customers’ discretion over a flat wage.

Most of these questions and guesses are not explored in Keep the Change. The author’s quest to become a tipping guru seems to mean that he will find out what various workers expect from customers (with some interesting behind-the-scenes stories on pooling, payments to the business, etc).

A very brief scan of a library catalog shows that there are many dozens of works on the anthropology, sociology, and economics of tipping. Doing this background research does not seem to be a part of the author’s quest to become a guru. But his anecdotes on the subject are interesting, and they are in depth enough that one can draw independent viewpoints on the whys and alternatives to gratuities.

His conclusion, which makes intuitive sense, is that one’s tipping habits are related to the way one treats relationships in general. Poor tippers fit the DSM IV‘s definition of Narcissistic Personality Disorder, which includes a sense of entitlement, patterns of exploitation in interpersonal relationships, and lack of empathy.

Tipping, the author finds, is like an implicit contract that involves a bonus. Just as many white collar executives take jobs with the explicit expectation that somewhere between a small percentage to a large majority of their compensation will involve a bonus, a restaurant customer in the U.S. knows before s/he sits down that the price of a meal will include paying a bonus of 15 to 20 percent as a tip. The difference is that a compensation bonus in, say, a consulting firm, is a form of profit sharing and an incentive. The employee (especially a partner) is a major stakeholder in the firm.

But restaurants do not share their profits with waiters. They pay their waiters like crap, and then they expect the customers to make up the difference. And for some reason, Steve Dublanica thinks that the customer has a personality disorder if s/he does not directly pay a substantial part of the waiter’s compensation.

This is an engaging work by a journalist who was once a waiter (and the author of Waiter Rant: Thanks for the Tip—Confessions of a Cynical Waiter). Mr. Dublanica seems to specialize in telling us how to be considered good customers by the impoverished workers who depend on tips, and by the business people who make them depend on tips. Perhaps all of us—the workers and Mr. Dublanica included—should start instructing business people on how to better compensate their employees and how to better treat their customers.