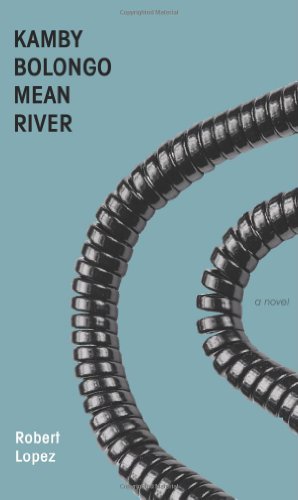 Imagine 1984 as narrated by Holden Caulfield. Imagine Caliban performing a star turn in a Ken Kesey’s One Flew Over the Cuckoo’s Nest. Imagine Rita Hayworth and Shawshank Redemption as written by Samuel Beckett; a Shawshank in which Andy Dufresne is as much trapped in his own head as he is by the four walls of his cell; a Shawshank in which the only glorious escape is the escape from the tyranny of language. This is what reading Robert Lopez’s second novel, Kamby Bolongo Mean River, feels like. It feels, by turns desperately sad, terrifyingly claustrophobic, and above all greasily compelling and spunkily liberating.

Sometimes in literature one hears a voice rather than reading it. And through this voice the entire reading experience becomes suddenly visceral. You almost feel like turning the volume down; perhaps you steal a furtive glance up on the bus or train, just to check whether it is disturbing anybody else. But soon you return your eyes to the page, not wanting to miss a single beat. And you listen. Reading Kamby Bolongo Mean River is like this. Reading Kamby Bolongo Mean River is like reading The Catcher in the Rye for the first time; you just know something momentous is happening as you read, as you become drawn in to Lopez’s bizarre, fractured narrative.

Great literature is all in the pitch of the voice, and the narrator’s voice here is pitched perfectly. It is a voice that bounces, no, ricochets between abusive, abused, amusing, contradictory, confusing, confused, LOUD, soft, angry, calm. It is a voice that is above all compelling. This novel will change your life, one way or another. Most likely, it will change the way you answer the phone. It will also change when you answer the phone, and after reading it you’ll find a newfound respect for the answering machine. Let me explain.

The novel begins with this: “Should the phone ring I will answer it. I will say hello how are you and wait for a response. I will listen to what the person on the other end says. I will listen to the words. Sometimes I don’t listen. Sometimes I wait until the person finishes answering the hello how are you so I can say whatever it is I’d been saying to myself before the phone rang.”
With this breathless, stream of consciousness (which sometimes becomes stream of unconsciousness) voice, Robert Lopez welcomes us to the world of his narrator, an adolescent-stroke-thirty-something who may or may not be named Johnny.

“Johnny” is incarcerated in an observation cell in what we presume is a mental hospital with only his bed and a telephone for company. The phone is a constant source of angst for “Johnny;” each strand of the narrative begins with “should the phone ring.” Should the phone ring, “Johnny” worries whether he should answer or whether he should let the machine pick it up. He worries who’ll be on the other end of the line, about whether it’ll be a prank caller, or whether it’ll be one of his family members. He worries about whether he’ll understand what the caller is even saying:

“The trouble is some people use words one way but other people use those same words a different way altogether. My problem is I think about one word for too long. A caller will say a word like injury and I will think about the word for a minute or two and not hear the other words. I won’t know who has the injury or why it matters. This always happens to me and this is why should the phone ring I might let it keep ringing until the machine answers. A word like injury can split your head open.”

“Johnny” has a lot of trouble with language. He trusts it about as much as he trusts the sinister white-coated doctors who watch him from the other side of the observation window in his cell. Language, for him, is a tool for entrapment (witness the bizarre verbal games the doctors subject him to and the mental knots they tie him in). It’s too full of double-speak and double-meaning. Which brings us to the core of the novel. Strangely for a book with little or no punctuation, an exhaustible lexicon and no traditional dialogue, Kamby Bolongo Mean River is a novel about language, about linguistics. It is a novel about communication and about telling stories. It is a novel about “Johnny’s” struggle to find a voice of his own.

Throughout the novel, “Johnny” tells us about the number of different voices he puts on as he answers the phone. Generally these voices are the voices of the powerful, military police or security guards; occasionally he uses the voice of a boxing coach. These are authoritarian voices, voices that speak the language of power. “Johnny” himself cannot speak this language, and so he must act. He must act like “Charlie Robertson,” because, as his mother told him, he always had “a great ear” for voices.

Despite “acting” (over the phone) as though he is a part of this “cruel and unusual world,” “Johnny” doesn’t understand it. He cannot find a way to speak up for himself in it. And thus he has become fractured, like the story he tells. “I sometimes decide I’ve had enough of the words and will listen only to the voice from then on. The words aren’t as important as the voice and when you only listen to the voice you don’t have to think about the words themselves. You can listen to what comes between the words and behind them.”

And: “The trouble is when I listen I don’t listen for the words. I listen for what is between the words and behind them. The way you do this is to listen to how the voice sounds. If you concentrate on the words you lose the voice and the voice is always too important to lose. How the voice pronounces each word is probably the most important thing.”

Throughout the opening section of the novel, “Johnny” tries to find a language by which to explain himself. It is a frustrating task. After all, “there’s nothing impeding myself from myself here,” and “I’m always right there in front of me.” But language still excludes him, still seeks to trip him up. He still cannot differentiate between the madness of the cell and the madness of his early life: Shifting time-frames: “I think Mother gave me too many pills that morning so it’s hard to remember. Otherwise the doctors here gave me too many pills this morning which amounts to the same thing.”

But gradually, “Johnny” starts to find his voice. He finds by going back to the most primitive method of communication imaginable. “The floor here is cement and easy to clean up after. It’s also good for drawing on in chalk. They let me draw stick figures on the floor so this is what I do all day long. I draw stick figures in relation to other stick figures. Some stick figures are dancing jigs while others are seated at a table eating sandwiches and coleslaw and others are meditating on the living room sofa.” He starts to tell his story by drawing these stick figures on the wall, and gradually, the reader starts to understand a little more about his difficult upbringing.

We learn that “Johnny” is potentially schizophrenic, or possibly autistic; certainly an early trauma has scarred him: “Mother said the doctor had to go in with pliers to get me out. She said they had to clamp the pliers hard around my head and crushed my skull in the process.” ‘“Johnny” goes on to tell us that: “I had to wear a special helmet whenever I left the house. I would be halfway out the door and Mother would scream from the kitchen to go get your fucking helmet. Mother was afraid I’d hurt my head and die and who could blame her really.”

The illness led to his mother’s wrapping him in cotton wool. But what led to her embezzling money from her job and being fired we’ll never know. What we do know, and “Johnny” knows to some extent is that his family life was tough. As it was for his brother Charlie.

The revelations about “Johnny’s” life are not particularly happy ones. The past he may have blanked out might well have been better off left blank.

But his story is so important to him because it is all he has, and the novel ends on a positive note. He talks about what he’ll do if he receives another phone call: “I will say you are who you are and where you are and I am who I am and where I am so let’s stop now with the hello how are you I have a headache and don’t feel like talking so please leave a message because I am fine.”

And of course, “I am fine” is ‘“Johnny’s” short-hand for I don’t want to talk to you anymore. So for now, he’s said all he wants to say. He’s told his story. Everything else is filler.