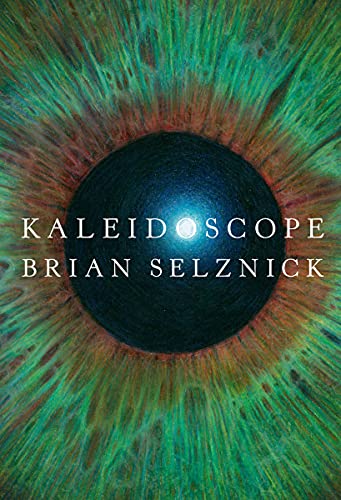 “A brilliant example of the power of words and pictures, of storytelling itself.”

Brian Selznick continues to defy expected norms of storytelling in these pages where time/space/memory all shift to create different aspects of the same narrative. Like the kaleidoscope of the title, each chapter opens with a symmetrical image refracting an aspect of the story and a page featuring a more traditional image representing the chapter’s theme. Butterflies, apples, keys, inventions, death, and grief appear in different versions of themselves. Each reflection amplifies the ones that came before, creating a complicated tapestry that creates a whole made up of much more than the individual parts.

All of this is held together by the voice of the unnamed narrator. He writes about his friend James, their love and friendship for each other. Their relationship takes a different form in each story, while remaining deep, loyal, and true, as James himself is.

When we first meet James, he’s sailing on a ship with the narrator, and the two have somehow ended up on the moon. “I smiled at James, whose vast learning was one of the reasons I wanted him by my side on this trip. His friendship and loyalty were the other reasons.”

Each chapter shows us these facets of James in different ways: He’s memorizing every bird in one, every butterfly in another. He’s inventing something to stop nightmares in one, to call up dead loved ones in another. James’ vivid life and aching absence are threaded throughout the book. He is both there and not there on every page.

Friendship, love, and grief refract in the shifting lenses of the kaleidoscope. So does knowledge, what it is to know and not know, what it means to be curious and feel wonder. In one chapter, an old man who has collected dictionaries, almanacs, and manuals with his wife sits down to write one book to encompass all of them. In memory of his dead wife, he will create “a single volume that would contain all the information in the universe.” He starts, naturally, with A, in particular with apple:

“But as he tried to define the word, he found himself also having to define so many other things, like the color red (which itself was nearly impossible to define), and the idea of seeds, and the concept of shiny, and the taste of delicious. He found that he had to write about supermarkets, and the concept of sin, because he remembered Eve ate the apple in the garden of Eden. He wrote about Snow White, who ate a poisoned apple, and he wrote about the smell of the apple pies his grandmother baked when he was young. When they found him dead in his attic room, he’d been working on his book for over twenty years. He was surrounded by seventy-five thousand pieces of paper, still trying to finish the definition of apple. . . . ‘It’s sad that Mr. Gardner died without finishing,’ I said. ‘I suppose,’ said James. ‘But I think he may have discovered something interesting.’ I waited for James to continue. He gently placed his hand on top of the pile of papers, as if he was touching a living thing, and said, ‘The entire universe can be found inside an apple.’”

Just as an apple can contain the whole world, Selznick has shown how the stories we tell can hold everything. Kaleidoscope is a brilliant example of the power of words and pictures, of storytelling itself.