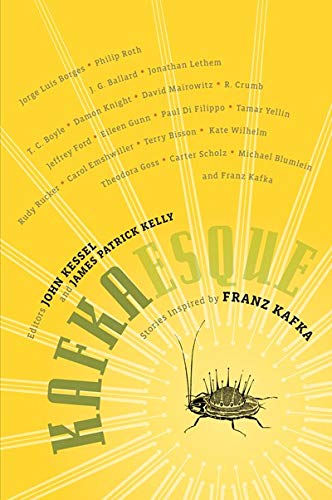 “All of the works collected in Kafkaesque prove both edifying and entertaining . . . A fine, intelligent, and exquisitely bizarre collection of fiction.”

Although Franz Kafka died all but anonymously in 1924, his influence on literature, not to mention popular culture, is undeniable. Indeed, the use of the term Kafkaesqe to describe everything from bizarre episodes of “The Simpsons” to endless lines at the DMV stands as a testament to the author’s enduring legacy. Adding to that legacy is the appropriately titled Kafkaesque, an anthology of short stories inspired by the wildly imaginative Bohemian author.

The stories in Kafkaesque fall into three categories: those echoing specific works of Kafka; those featuring Kafka as a character; and those that, in the words of the editors, “use the methods or materials of Kafka.”

Highlights of the volume include T. C. Boyle’s re-imagining of The Trial as a hilariously and overwhelmingly daunting visit to an auto mechanic in “The Big Garage,” Jonathan Lethem and Carter Sholz’s completely fictional account of Kafka’s efforts at making a go as a Hollywood hack in “Receding Horizon,” and Jorge Luis Borges’ labyrinthine investigation of social mores and their origins in “The Lottery of Babylon.”

All of the works collected in Kafkaesque prove both edifying and entertaining, but David Mairowitz and Robert Crumb’s graphic adaptation of “A Hunger Artist” emerges as the true jewel in the anthology’s crown. Here, Kafka’s dark, dry humor finds its latter-day soul mate in Crumb’s almost byzantine illustrations: The thousand-yard stare of Crumb’s emaciated hunger artist lends both gravitas and a heightened air of madness to the misunderstood object of Kafka’s haunting tale.

Needless to say, Kafkaesque will appeal to fans of Kafka, but the stories contained therein will also strike a chord with anyone who’s ever encountered manifestations of the Kafka’s nightmare landscapes in our contemporary world: indecipherable tax forms, automated customer service hotlines that lead callers in endless circles, and bureaucratic nightmares of all shapes and sizes.

Likewise, the commentary of editors John Kessel and James Patrick Kelly, along with that of the authors whose work comprises this collection, sheds light on the staying power and almost universal appeal of the most mysterious and, arguably, influential author of the 20th century. A fine, intelligent, and exquisitely bizarre collection of fiction.