The Kaepernick Effect: Taking a Knee, Changing the World 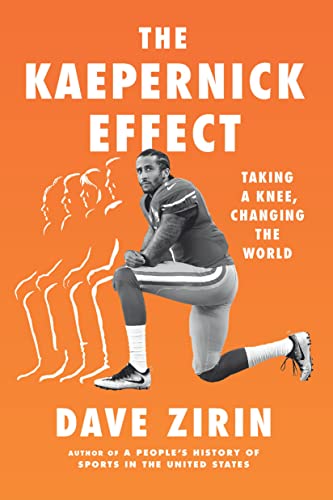 “What is most heartening about the events described in The Kaepernick Effect is the sophistication of these young athletes and their commitment to the causes that have provoked their actions. They may not have changed the world, but they have clearly left a mark on their generation and their society.”

In the last five years, no act of protest in sports has been as highly visible as San Francisco 49ers quarterback Colin Kaepernick’s decision to kneel or “take a knee” during the playing of the National Anthem prior to an NFL football game. What started as a decision to sit during the anthem prior to three exhibition games in August of 2016 went largely unnoticed. On the advice of an ex-NFL player and Green Beret, Kaepernick, jointed by teammate Eric Reid, knelt for the anthem in an exhibition game in San Diego on September 1. The crowd reacted with boos and shouting directed at Kaepernick that continued throughout the game. This was how it began.

In The Kaepernick Effect David Zirin, columnist for The Nation, recounts the events leading to the protest and the impact it had across the nation. The protest was directed at the police brutality that had resulted in the death of two African American men during the summer of 2016. It came as the Black Lives Matter movement was gaining momentum and after WNBA players had held an on-court protest.

The immediate reaction of the San Diego crowd was a prelude to a massive denunciation of Kaepernick by fans and politicians. NFL officials and the media joined the chorus. Ultimately, Kaepernick was frozen out of the NFL as he remained the focus of protest. Over the next several years, large numbers of athletes across the United States and the world, at all levels of competition and multiple sports joined the protest, by taking a knee and thereby condemning police killings of African Americans. A focal point was reached following the killings of Breonna Taylor and George Floyd.

David Zirin documents many of these protests at all levels of sport within three chapters titled “High School,” “College,” and “The Pros.” Each of the three main chapters are composed of interview materials collected by Zirin from athletes at each level of competition who were affected in some way by Kaepernick’s protest and by the many cases of police shootings of African Americans. Many of these events will be familiar to most readers, while others were more localized and underreported in the national media.

In the “High School” chapter there are 14 incidents recounted by athletes from various sports. Each is composed primarily of the words of the athlete, with Zirin providing some context and explanation when needed. Many of these accounts evoke powerful emotions.

Across the board the forces in play and the reactions to the protests and protestors are similar. At times, the reactions are extreme and shocking. The duplicity of those in authority is at times disgusting. There are supportive figures such as parents, the occasional administrator, and some coaches who are at times heroic. The perseverance of the high school athletes under enormous peer pressure and the power of authority is often inspiring.

There is a similar pattern among the protests at the college level where the stakes are higher as some athletes were threatened with loss of their athletic scholarships. Professional athletes are under a different set of pressures with more at stake financially. These protests at both the college and professional level have patterns of similarity in actions, motives, and reactions. Again, Zirin presents these cases using the interview material he has gathered.

One weakness in all of this stems from the repetitive nature of the material. The provoking events are similar and reactions at all levels have a sameness about them. Read within a short space of time the repetition leads to a numbness in the face of the banality of evil. Also, Zirin’s earnestness is at times irritating. The saints and sinners’ aspect of the material does not need to be pointed out as it is more than obvious. At the same time Colin Kaepernick’s motives and actions are detailed and serve to offer a more complete picture of him than available in contemporary press accounts.

What is most heartening about the events described in The Kaepernick Effect is the sophistication of these young athletes and their commitment to the causes that have provoked their actions. They may not have changed the world, but they have clearly left a mark on their generation and their society.