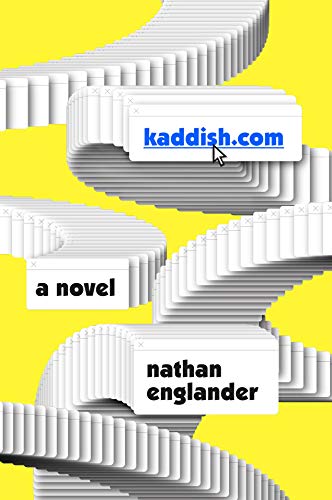 “Englander finds fascinating ways to explore another of his great recurring themes: the points at which modernity and tradition may fruitfully, if uncomfortably—and always comically—collide.”

Although the late Philip Roth’s kaleidoscopic body of work steadfastly resists reduction to a few overarching themes, one question that arises often in his books is whether Jewish tradition and community survival are a Jewish writer’s burden, birthright, or just more grist for the mill of uncompromising fiction.

Nathan Englander, author of two acclaimed short story collections and three remarkably varied novels, has navigated this question with remarkable assurance as a writer who withdrew himself years ago from the closed society of his Orthodox upbringing, resolving to live his adult life as a secularist. Englander arguably approaches Jewish literary tradition with more reverence than he accords to Jewish religious tradition, but his work is deeply imbued with both.

Englander’s stories often draw comparisons to Bernard Malamud and Isaac Bashevis Singer for their fable-like meditations on Jewish identity. His new book, the deeply affecting and raucously funny Kaddish.com, deals predominately with issues of identity, responsibility, and the durability of self-reinvention in the face of inherited belief. It also confronts the question of Jewish tradition as burden or birthright more emphatically and insightfully than anything else Englander has done to date.

Kaddish.com begins in an Orthodox Jewish home in Memphis in 1999 with two 30-ish siblings, Larry and Dina, sitting shivah for their just-deceased father. Larry, a secularist, and Dina, a practicing Orthodox Jew, are fighting bitterly over what Larry regards as the burden of having to act the part of a halachically correct Orthodox mourner for a full week in the oppressive presence of a minyan, rather than grieving in his own way.

This family turmoil is nothing new. Though Larry’s father generally abided his son’s choices with grace, on his deathbed, he made clear his conviction that Larry’s current lifestyle is temporary, a thing apart from his real identity, a mere prelude to his eventual homecoming.

“To his father and his sister,” Larry reflects, “home was not the singular place one hailed from. It was any outpost, anywhere on the planet, that held like-minded, kosher, mikvah-dipping, synagogue-attending, Israel-cheering, fellow tribespeople, who all felt, and believed, and did the very same things in the very same way—including taking mourning so seriously that they breathed up all the air in the room, suffocating the living, so that the survivors might truly end up one with the dead.”

The scathingly personal theological debate between Dina and Larry at their father’s shivah reaches a crescendo when Dina raises the issue of Larry’s responsibilities as the only son. To ensure “a truly radiant afterlife,” Larry must say the mourner’s Kaddish for his father ten times a day in the company of a minyan for the next 11 months.

After much dissembling, Larry admits that he won’t do it. He insists that it makes no difference if he fulfills a promise with no conviction behind it. Dina’s rabbi concedes that if they can find a proxy to say the prayers, Larry is off the hook.

The excruciatingly comic moment that follows launches Larry on an arc of transformation that is both wildly original and so precisely evocative of Philip Roth that it’s hard to imagine it as anything but an homage. At first it appears that the two pivotal scenes that bind Englander and Roth share only the specifics of their situational humor, but those commonalities eventually land their characters firmly on opposite sides of the burden/birthright divide.

Midway through The Ghost Writer (1979), Roth’s first Nathan Zuckerman novel, Zuckerman passes his first night in the home of celebrated Jewish writer E. I. Lonoff. Zuckerman settles down in Lonoff’s study to try to write a letter to his estranged father, with whom he has fallen out over the ascendant author’s first popular story and its allegedly negative portrayal of Jews. Zuckerman reflects in particular on his correspondence with a judge and family friend who has sent him ten questions about his obligation to portray the Jewish community in a positive light, concluding with, “Can you honestly say that there is anything in your short story that would not warm the heart of a Julius Streicher or a Joseph Goebbels?”

Soon he lands on a site called Kaddish.com, affiliated with an Orthodox yeshiva in Jerusalem, that specializes in precisely the service Larry seeks. For a price, the site will provide the earnest mourning-by-proxy ministrations of the rabbinical student of the client’s choice. “It was like a JDate for the dead.”

Confronted with this image, which fails to titillate him as it ordinarily would, Larry thinks, “God help her. And God help me . . . Then—for the first time since he’d left the fold—a personal, heartfelt prayer escapes his lips. ‘God protect my father’s soul.’”

For the first time, Larry wonders if he has not so much discharged a meaningless ritual obligation as surrendered his birthright.

In The Ghost Writer, Nathan Zuckerman confronts the wave of dejection and self-loathing that washes over him on Lonoff’s couch with an emergency infusion of Henry James, to restore his faith in doubt itself as the wellspring of the writer’s art. Larry turns his back on his defiantly constructed secular self and seeks redemption as a Jew.

The next time we encounter Larry, many years later, it’s as Reb Shuli, a rabbi teaching at an Orthodox yeshiva in Brooklyn, still atoning for the choice he made, and burdened with its far-reaching implications.

In the improbable, irresistible adventure that ensues, Larry/Shuli struggles to devise some longshot, technology-assisted means of reclaiming what he’s lost—the right to forgive himself, to mourn his father, to be a Jew, and to be a son.

Therein, Englander finds fascinating ways to explore another of his great recurring themes: the points at which modernity and tradition may fruitfully, if uncomfortably—and always comically—collide.