Justice, Justice Thou Shalt Pursue: A Life's Work Fighting for a More Perfect Union (Volume 2) (Law in the Public Square) 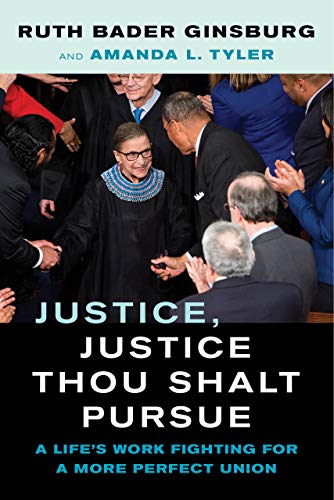 “I would like to be remembered as someone who used whatever talent she had to do her work to the very best of her ability.” —Ruth Bader Ginsburg

When Justice Ruth Bader Ginsburg died on September 18, 2020, the United States lost one of the greatest proponents of equality, liberty, and justice the country has ever known.

This book, Justice, Justice Thou Shalt Pursue: A Life’s Work Fighting for a More Perfect Union by Ruth Bader Ginsburg and Amanda L. Tyler is both timely and a reminder of what the Notorious RBG brought to the table both as a lawyer and a Supreme Court Justice.

This book is a compilation of speeches, briefs, and court decisions that track the progression of Ginsburg’s career from civil rights lawyer to U.S. Supreme Court Justice. The opinions and briefs that Ginsburg chose are her personal favorites.

Her co-author, Professor Tyler, includes an interview with Ginsburg that sheds light on what the Justice thought about a variety of matters. When asked which class was especially helpful to her, Ginsburg replied, “it was my first-year Civil Procedure class. I was skilled at navigating my way through the federal courts.” Law students (and lawyers) should take note; Ginsburg knew that knowing the rules of the game is essential.

Many may see this book as appealing to an audience solely comprised of law students, lawyers, and judges. That would be short-sighted. Ginsburg’s impact on the development of a body of law that impacts the daily lives of everyone living in the Unites States is palpable. She wrote her briefs, dissents, and decisions to establish the inalienable right of all people to be treated fairly.

Ginsburg believed that “[A] prime part of the history of our Constitution is the story of the extension of constitutional rights to people once ignored or excluded.” Too often the justice system seems blind to the plight of the underdog. The wants and demands of the privileged seem to take center stage and overwhelm the needs of those who have no money or privilege.

Professor Tyler had the enviable job of working with Justice Ginsburg on this book. She now has the unenviable task of carrying on without RBG at her side. That is a loss shared by everyone.

First year law students will complain that reading court decisions is comparable to wading through foot-sucking mud and muck; and that is often the case. Too many judges bury their reasoning behind obtuse words and obfuscation. They revel in the obscure.

Ginsburg, however, does not. Her briefs, decisions, and dissents clearly articulate her reasoning and her positions. One does not need a law degree to read and understand what she writes. Ginsburg once said, “[M]y dissenting opinions, like my briefs, are intended to persuade. And, sometimes one must be forceful about saying how wrong the Court’s decision is.”

The book includes several speeches Ginsburg made over the years and one thing is readily apparent—none of them were very long. She obviously knew how to hold the audience. Justice Ginsburg said, “[F]ight for the things that you care about, but do it in a way that will lead others to join you.”

Ruth Bader Ginsburg participated, as lawyer or judge, in some of the most monumental decisions of modern times. She was passionate about her work and understood the impact decisions would have on the lives of ordinary citizens. Readers will not see any evidence of Ginsburg treating her responsibilities lightly or carelessly.

The Lily Ledbetter case, in which Ginsburg dissented, is one of her favorites, “some of my favorite opinions are dissents.” The Supreme Court found nothing wrong with Goodyear paying Ledbetter less than all the men doing the same job. Fortunately, Congress understood what Ginsburg wrote in her dissent and amended Title VII to adopt the paycheck theory. A major advance for women.

Ginsburg believed equal rights under the law is not limited to laws that discriminated against women. Two of her favorite cases, included in the book, involved men who were discriminated against because the statutory language excluded them from coverage. Ironically, the courts had no problem seeing how excluding men from the law was an ill-conceived notion, but excluding women was seen as protective and rational. Ginsburg saw the problem and fought to remedy it.

Notorious RBG is gone, but she will be remembered for using her prodigious talents provide a sound foundation upon which to build a better world.