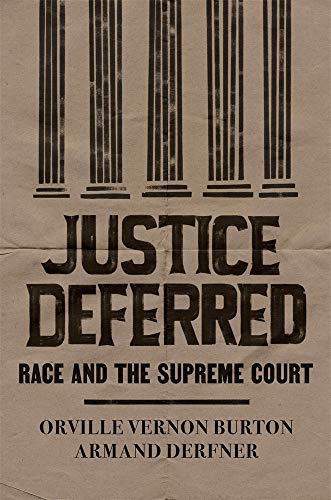 “Justice Deferred offers a needed refresher course for faded memories on the Supreme Court’s unequal history with one of the key issues not only of our day, but one that has always been key in this country’s development—one that still requires more work.”

At best, the US Supreme Court has a mixed record when it comes to issues of race and civil rights, with one brief era of progress from the 1930s to the 1970s. So say authors Orville Vernon Burton and Armand Derfner in their new book Justice Deferred: Race and the Supreme Court. “Before that time, the Supreme Court spent much of its history ignoring or suppressing those rights, and in the half century since the early 1970s the Court’s record on civil rights has retreated far more than it has advanced.”

In Justice Deferred, the authors systematically examine key decisions of the Court that, in large measure, reflect rather than shape the nation’s attitudes on race, with a very uneven progression full of historical missteps that offer caveats going forward. “[T]he line is not straight, but the past links to the present. Ultimately the book speaks to the future.”

Since the United States’ inception, questions of race and civil rights have divided its citizenry. The prelude to the Declaration of Independence falsely promoted the founding fathers’ belief that all men are created equal, but just try telling that to those held in bondage. A short time later, the fledgling nation embraced a constitution that explicitly blessed slavery and assigned slaves a value, for purposes of apportioning congressional representation, of “three fifths of all other persons.” Equal, indeed!

Although the Supreme Court self-declared, in Marbury v. Madison, that it is the final arbiter of what the law means, the authors take the reader through a litany of cases that demonstrate that the Court has largely been unable to make up its mind on race and civil rights. And it doesn’t end with the question of Black and white, though those are typically noted, both today and throughout history, as the primary colors.

Questions regarding the status of native Americans illustrate the Court’s wishy-washiness. In 1831, the Court held that the Cherokee nation was not sovereign, but rather was a “domestic, dependent nation.” The very next year, though, it held that Indian nations were “distinct, independent political communities retaining their original natural rights.”

Later that century, and on into the next, the Court also grappled with issues related to Asians, from Chinese immigration to President Roosevelt’s executive order that banished thousands of people of Japanese descent to internment camps during World War II. But it’s the struggle with issues of Black and white that dominate the Court’s history on civil rights.

In 1841, the Court granted freedom to African Americans who had taken over the slave ship Amistad. Good result, right? But the decision was not premised on an inherent belief in the wrongness of slavery and that these people should be free. Rather, the case hinged simply on a finding that the captives had originated in Africa, as free people, but not in Cuba, where slavery was legal. Had the facts shown the latter, the result would have been different.

The nadir of the Court’s handling of race would come in the mid-19th century, prior to the Civil War, in Dred Scott v. Sandford, which the authors call “the most reviled case in Supreme Court history, and justly so.” In Dred Scott, the Court denied the right of a slave to sue for his freedom because only citizens had standing to sue in the courts, and that Scott, as a Black man, regardless of whether he was free or not, could never be a citizen.

The authors note that, when Chief Justice Roger Taney wrote that African Americans “had no rights which the white man was bound to respect,” it was intended merely as “historical observation.” Nevertheless, they say, it “declared in explicit words that the ‘blessings of liberty’ promised by the Preamble to the Constitution were somehow denied to all those of African descent, even if born of free parents.”

The authors work forward from there, leading up to what was, in this reviewer’s opinion, the second most reviled case, Plessy v. Ferguson, in which the Court declared that “separate but equal” was good enough for the Black race. Let society decide when it was time for the races to mix, the Court said, not us.

As Justice Henry Brown wrote: “If one race be inferior to the other socially, the constitution of the United States cannot put them upon the same plane.”

In other words, notwithstanding Marbury v. Madison’s eloquent justification for making the Court the final arbiter on these issues, this Court was willing to defer to society, arguably an abdication of its responsibility.

Along the way to the bright light of the Warren Court, at least on issues of race, the authors trace the evolution of decisions through the Jim Crow era. Progress was inevitably followed by regression, on matters such as voting rights and the aforementioned internment for persons of Japanese descent.

But then, in 1954, came the polar opposite of Plessy, Brown v. Board of Education, which bluntly held that separate is inherently unequal. Although Brown’s specific application was to education, “it was clear to most observers that its logic applied to other activities. . . .”  A step forward, the authors say, but even “[a]s the Supreme Court picked its way forward, there were missteps.”

Missteps in voting rights, busing, federal criminal prosecutions for violations of civil rights, employment discrimination, fair housing, affirmative action, redistricting, and criminal justice. Missteps even in implementing Brown with “all deliberate speed,” as that case called for, as the result was “a process that turned out to be mostly ‘deliberate,’ with little ‘speed.’”

Missteps that would lead Justice Harry Blackmun to ponder, in 1989, “whether the majority still believes that race discrimination—or more accurately, race discrimination against nonwhites—is a problem in our society or even remembers that it ever was.” Justice Deferred offers a needed refresher course for faded memories on the Supreme Court’s unequal history with one of the key issues not only of our day, but one that has always been key in this country’s development—one that still requires more work.

As the authors conclude: “A generation from now, no living person will remember a time when segregation was the law of the land. Historical awareness provides the encouragement and incentive to keep working for change.”