The Justice of Contradictions: Antonin Scalia and the Politics of Disruption 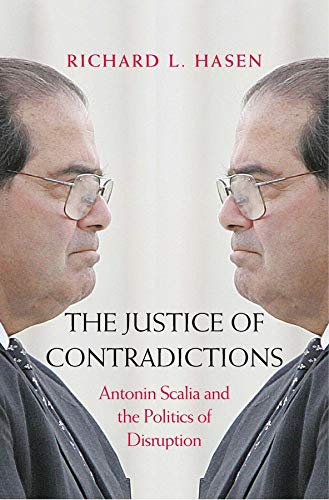 Early in his new book about the late Supreme Court Justice Antonin Scalia, University of California law and politics professor Richard L. Hasen professes to occupy an objective middle ground somewhere between Scalia’s admirers on the political Right and his detractors on the political Left.

Hasen’s pretense of objectivity, however, soon falls away as he seeks to diminish Scalia’s substantial judicial legacy by questioning his intellectual integrity and blaming him for coarsening legal debate and delegitimizing the Supreme Court. Scalia, according to Hasen, was mostly a political disruptor—meaning a Justice who dared to challenge the liberal notion of a living, evolving Constitution.

Hasen’s book is more, however, than just an attack on Scalia. Hasen’s goal is to discredit “originalism” and “textualism,” methods by which Scalia and other conservative jurists strictly interpret the Constitution and statutes. Hasen, it is clear, believes in a living Constitution that adapts to changing times and values. Liberal values, that is.

Hasen repeatedly expresses concern that Scalia’s judicial opinions have spawned a “conservative farm team” of judges who might perpetuate his legal legacy by chaining the Court to the actual written Constitution and laws by originalism and textualism.  President Trump’s appointment of Justice Neil Gorsuch, Hasen writes, is a case in point.

It seems that for Hasen, when liberals lose elections and control of the branches of government, political disruption ensues.

Interestingly, Hasen has a very favorable view of the judicial opinions of Justice Harry Blackmun whose most famous opinion in Roe v. Wade overturned the abortion laws of every state—a result that surely qualifies as political disruption.

Hasen criticizes Scalia for not fully adhering to originalism or textualism in all of his opinions. One example of this is Scalia’s approach to the “selective incorporation” of the Bill of Rights against the states via the 14th Amendment.

Pure originalists, like Justice Clarence Thomas, correctly argue that there is no textual basis for using the 14th Amendment to selectively apply the protections of the Bill of Rights to the states. Instead, the Court has over time subjectively decided which of the Bill of Rights are so fundamental that they should be applied to the states. It is a results-oriented method of judicial activism, and Scalia accepted it.

Scalia was also reluctant to ignore or overturn legal precedents even where he believed those cases were wrongly decided. These are some of the contradictions that Hasen highlights in the book.

One curious criticism leveled by Hasen is that Scalia’s dissenting opinions often used insulting, nasty, sarcastic, demeaning, and coarse language toward other Justices he disagreed with, and that this has delegitimized the Court.  Hasen’s examples, however, do not match his characterizations.

Here are some of Hasen’s examples: accusing Justices of acting like politicians in robes; writing that some Justices act like “super-legislators;” calling the Court an “unrepresentative body;” calling a majority opinion “smoke and mirrors” or “irrational.” This is pretty mild stuff.

Hasen even relies on a “Sarcasm Index” compiled, he admits, by liberal law professors and law review authors, to support his claim that Scalia has “made rude, mocking rebuttal of other Justice’s arguments an art form.” Hasen hastens to acknowledge that Scalia’s sarcasm “was rarely ad hominem but more often made the point that the [Court’s] majority was usurping judicial power.”

In the end, the book reads like an extended version of Senator Ted Kennedy’s attack on Judge Robert Bork shortly after President Reagan nominated him to the Supreme Court. Senator Kennedy unfairly described Robert Bork’s America as a place where women and minorities would lack legal protection, writers would be censored, and rogue police would operate as if in a police state.

For Hasen, had Scalia succeeded in persuading the Court to fully adopt his judicial and political worldviews, “it would have threatened some core democratic principles,” such as voting rights, fair representation of minorities in Congress, health care reform, labor unions’ ability to resist corporate power, capital defendants’ legal rights, and the ability to limit money in politics.