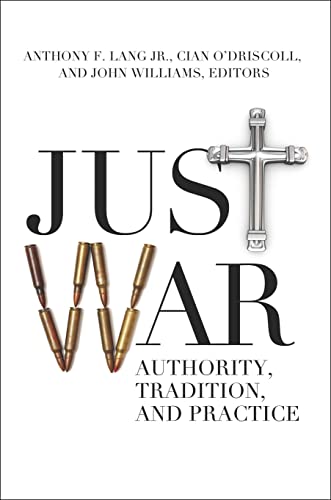 The editors of this work state in the preface that Just War: Authority, Tradition, and Practice is the result of an interdisciplinary workshop sponsored by the US Institute of Peace, Washington, DC, during August 2010. The origin of the work is important as is the frequent reference to President Obama’s Nobel Peace Prize acceptance speech given in 2009.

It is particularly interesting that the contributors to this volume focus on the statement “And it will require us to think in new ways about the notions of just war and the imperatives of just peace.”

Unfortunately, however, they contradict the president’s words, for he was not speaking about extending the notion of “proper authority” for waging war to every Tom, Dick, and Harry who had political, religious, or charismatic influence over a group of people, rather he was referring to human institutions such as the United Nations or regional organizations like NATO, the African Union, etc. Thus the focus of this book makes reading it rather perplexing.

In the first paragraph of the introduction Lang and O’Driscoll mention that the modern interpretations of the Just War Tradition are organized around jus ad bellum and jus in bello. Interestingly they attach an end note stating the some people contend that there is a third leg to the tradition called jus post bellum but it is not well accepted. Augustine and Aquinas implied it. Vitoria and Vattel discussed it in some detail. Machiavelli, Burke, and Locke all endorsed it. Alfred practiced it after he defeated Guthram. And we all should have learned the importance of it after WWII. So why is the third pillar still ignored by all too many scholars and liberal theorists?

Those portions of the book in which the writers discuss the question as to who has the legitimate right to authorize the going to war is reminiscent of medieval monks sequestered in their monastery arguing how many angels can sit on the head of a pin. The arguments range from only the sovereign, to just about anyone to only the United Nations. Perhaps Chris Brown gets it right in his chapter, which is an interesting read.

Brown discusses the arguments of Richard Harris, the Bishop of Oxford, and Rowan Williams, who would later become the Archbishop of Canterbury, concerning the legitimacy of the First Gulf War to eject Iraq from Kuwait. Harris was for it while Williams was not. Brown’s comments about the two positions were most interesting and thought provoking. He posited that “proper authority” might rest neither with the sovereign state nor the United Nations, but rather with international public opinion. In a sense John Williams in his chapter “Not in My Name” suggests that in liberal “democracies” perhaps the people should be the proper authority; let’s take a vote!

Although Brown’s conclusion would also take us back to medieval times, it would certainly make for a most interesting three-way debate. Such a discussion would be entertaining even though it would not have contributed much to the Just War literature, but neither does Just War: Authority, Tradition, and Practice. This is unfortunate given the reputations of the many contributors.

Brown also raises two intriguing questions; when is a person wearing a military uniform not a legitimate target and when does a civilian become one. Perhaps he will write a follow-up article or chapter answering these two questions. He also discusses judgment and practice versus theory and raises several interesting points. He argues against leaders employing an algorithmic approach to the principles of just war and laments about the shift away from context-dependent decision-making.

Nigal Biggar made several interesting points in the third chapter. In his Thomist discussion he hints at the notion of fiduciary responsibility, but does not state such nor does he develop the concept. Perhaps he never intended to suggest that kind of duty. Next was the chapter by John Williams. He seemed to ignore the condition of “likelihood of success,” which is one of the classic conditions of jus ad bellum. He also addresses the issue of “the politics of authority and the authority of politics.”

Tarik Kochi discusses the tension between the Just War Tradition and International Humanitarian Law. This is a very real issue in today’s world. It is realized in the notion of Responsibility to Protect (R2P) and all the complications R2P brings to the table.

In her chapter Neta Crawford discusses the three algorithmic tools the United States has used in the two Iraq Wars, Kosovo, and Afghanistan. She states that these and their upgrades are dismal failures. She contends that much of the noncombatant killing “. . . the consequence of fatigue, radicalized hatred, trauma, and training. It is also sometimes truly accidental.” Really? Early in the chapter she notes that military lawyers vet all targeting based on international law and technical expertise. Her two statements seem to be in conflict with each other.

Michael Gross asks an interesting question in his chapter. Can guerrillas and non-state actors wage a just war? This rather begs the question of whether or not they really care about waging a just war. It seems as though ordinary people tend to overlook the atrocities they commit versus the mistakes Goliath makes.

John Kelsay’s chapter is also interesting and worth studying in greater depth. In the section on comparative ethics and just war discourse he reflected on a study that he and James turner Johnson conducted comparing the Western and Islamic cultural traditions of going to and the conduct of soldiers in war.

That discussion is beyond the scope of this review, but scholars might want to investigate how cultural traditions influence all three aspects of Just War—jus ad bellum, jus in bello, and jus post bellum. One question that comes to mind is, and the International criminal Court aside, Can we realistically legalize the principles of Just War in such a way as they are acceptable across multiple cultural traditions and contexts?

Overall this book is a disappointment given the stature of the contributors. It is one thing to interpret situations and what people meant in conversation or writing, but it is altogether different to misstate facts without further explanation.

For example, James Turner Johnson wrote that in the United States the authority to declare war rests in the Senate. The Constitution is quite clear in Article I, Section 8 that Congress, which includes both the Senate and House of Representatives, declares war. Johnson needs to explain that discrepancy.

These types of errors are not acceptable. Further it would be nice if Cook refrained from recycling his material. He is up front that his chapter is an adaptation of a chapter in his latest book, which was recycled from a previous article.

And just when you thought that feminism had run its course we have Laura Sjoberg making it a part of the Just War tradition. She introduces a gender-based approach to understanding Just War and discusses a feminist critique of the principle of non-combatant immunity. Do men combatants really attack women because they are “beautiful souls”? Heaven help us!

On the first page of the Introduction Lang and O’Driscoll acquaint us with President Obama’s Nobel Peace Prize acceptance speech particularly his charge for finding solutions to the problem of war. To address the challenges associated with war will require a unified vision, hard work, and persistence. “And it will require us to think in new ways about the notions of just war and the imperatives of a just peace.” Several of the writers refer to the quotation in their chapters.

Rather than focus on authority, tradition, and practice the writers should have taken up the President’s challenge and addressed new ways to think about just war and the imperatives of a just peace. Kelsay’s chapter could easily have set the stage for such a discussion.

As noted above these scholars could have discussed how cultural traditions, religion, economics, and politics influence all three aspects of Just War—jus ad bellum, jus in bello, and jus post bellum.