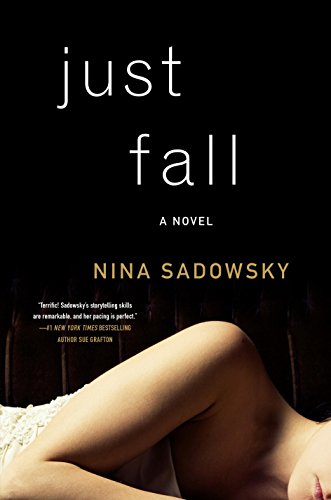 The couple at the heart of this novel—Rob Beauman and Ellie Larrabee—appear on the surface to have everything. They are blessed with great looks, possess well-paying jobs, and have found true love in each other.

Ah, but appearances can be deceiving, deceptively so, as author Nina Sadowsky shows us, slowly, methodically, and somewhat dramatically. The novel alternates between the past and present lives of several characters in chapters that are headlined “Then” and “Now.”

That conceit is a wonderful way to tell this story and one never gets lost despite the non-chronological scenes.

The novel’s problems start to develop as we are treated to more and more of the characters’ interior thoughts and monologues. Rob and Ellie are one very dark couple. They are seriously flawed by their parents and upbringing but in the most stereotypical way possible. Rob has a mother who’s abused by an evil stepdad while Ellie must bear the brunt of living with an ill sister who sucks all the air out of her parents’ lives.

This kind of setup is strictly paint-by-numbers and it doesn’t end there. Would it shock you to learn Ellie grows to resent her sister or that Rob ultimately attacks the evil stepdad while the guy is beating Rob’s mom to a pulp?

Unfortunately, the characters’ tough childhoods don’t make them dark and interesting—instead, they become stone cold killers who become more and more unlikeable as the novel develops.

If this storyline sounds familiar, it might be because you saw the film Mr. & Mrs. Smith starring Brad Pitt and Angelina Jolie about a couple of hit men married to each other.

But here, we don’t get to watch Brad Pitt or Angelina Jolie exchange sly looks and jokes with each other. That film was a black comedy; Just Fall is deadly serious. There’s not a hint of humor in this novel’s 300-plus pages and, largely because of the tone, it doesn’t work.

It’s doubtful that very many readers will empathize with these murderers, no matter how odious some of victims are. Consider: the wife’s first “necessary” kill involves drugging a man, stabbing him repeatedly in the groin while he’s out cold, and then slicing off his lip. And she’s the heroine here!

Granted, the victim is not a good person but murder is, you know, wrong, a point that seems to have escaped author Sadowsky while she was constructing the plot. And this book feels so . . . constructed. It’s like Sadowsky put a little of Gone Girl and a smidgen of The Girl on the Train in a mind blender and this is what came out.

Sadowsky has to work overtime to convince the reader that there’s a reason Rob and Ellie must kill. Can’t you see? Don’t you agree? Well, no. There’s no fun here, no surprises—just brutality gone mad to satisfy a plot line.

And then there’s the writing. The author includes the banal details of life that are simply not interesting, a major reason most writers skip over them. Do we need to follow Ellie into the bathroom so we know that she pees and flushes? Do we need to hear every ingredient in the soup she’s preparing for her equally psychopathic killer?

Almost no one in this story is truly sympathetic except for a local cop on the Caribbean island of St. Lucia who is trying to solve several cases of children being kidnapped. It’s pleasant to get inside his head, mostly just to get out of the heads of the couple at the center of the story.

Another thing—the author sometimes talks directly to the reader, but she’s not nearly clever enough way to pull it off. And at the very end, she more or less threatens that we’ll hear from this couple again. Let’s hope not.

But they are good-looking and enjoy the finer things in life. Author Nina Sadowsky makes that point over and over again. And we get to be inside the brains of these two fictional characters so you—the reader—will understand why they must, simply must, kill.