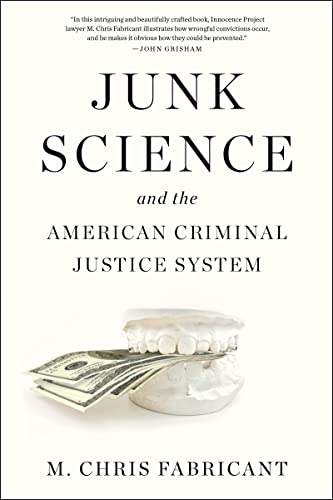 “Often riveting, well-researched, and utterly convincing, this book sounds a frightening alarm about unreliable expert testimony in the courtroom.”

When DNA evidence reverses the convictions of wrongfully convicted prisoners, we all applaud. But we seldom wonder: on the basis of what evidence were the newly exonerated found guilty in the first place? In his eye-opening Junk Science, M. Chris Fabricant, a director of the Innocence Project, offers an answer.

“Nearly half of all wrongful convictions overturned by DNA evidence involve misuse of forensic evidence,” he writes. Forensic evidence is the kind much-touted on TV shows like CSI and Forensic Files: from analysis of bloodstains, handwriting, and tire prints to hair and fiber testing and arson investigation.

In his 20-year legal career, Fabricant has served as a public defender and clinical law professor, and has litigated death penalty cases in the South and misdemeanors in the South Bronx.

His book hones in on bite-mark evidence, which has been presented by “expert witnesses”—forensic dentists—for many years as scientific proof of guilt in murder cases. Since 2012, as head of Innocence Project’s strategic litigation department, he has worked on cases of convictions involving bite-mark evidence.

Much of Junk Science details wrongful convictions and imprisonments based on the supposed science of bite-mark analysis. If nothing more, readers will leave the book realizing such evidence is worthless. As the National Academy of Sciences concluded in a massive 2006 report on the state of forensic sciences in the United States, none of the forensic approaches accepted in criminal courts has been subjected to scientific scrutiny.

As Fabricant observes, forensic evidence, with “no basis in science,” has been accepted by the criminal justice system for the past 50 years.

Once hailed as an “overlooked crime-solving technique,” the analysis of “bite marks” on murder victims has simply been a “subjective interpretation” of bruises, he writes. Forensic dentists “persuade jurors to see what they see. See that? That’s a bite mark.”

In 1982, Gerry Vale, a founder of the American Board of Forensic Odontology, wrote, “Experience in major criminal cases throughout the country, including the Theodore Bundy case in Florida, demonstrates that when bite mark evidence is effectively utilized it can have an enormous impact on the outcome of the case.”

Fabricant’s concern is the impacts that ruin the lives of innocent people. He describes the experiences of people like David Wayne Spence, 40, a roofer, who was accused in Texas of the rape and torture murders of two 17-year-old girls and the murder of an 18-year-old boy. Tried and convicted on the basis of bite marks—an expert said bite marks on the body of one of the girls matched Spence’s teeth—he was executed on April 3, 1957.

“Honestly, I have not killed anyone,” he said on his way to the death chamber. “I wish you could get the rage from your hearts and you could see the truth and get rid of the hatred.”

After his execution by lethal injection, the “expert” testimony against him was debunked and Spence’s innocence was established.

As Fabricant makes clear, the victims of junk science in the courtroom are most often Blacks. Human biases play a major role, he says. “Plainly, Black people and other people of color, explicitly and implicitly, are not afforded the presumption of innocence, calling into question the legitimacy of our justice system at its most fundamental level: whom we punish and why.”

The author traces the rise of forensic odontology over the years, with its elaborate system of professional certification intended to guarantee the “expert” testimony that such dentists can provide. It seems mainly to have ensured that many dentists have become rock stars of the courtroom.

Junk Science will leave many readers baffled—and infuriated—that unscientific evidence has been widely accepted in the nation’s courts. Nor is there any sign that things will change.

Often riveting, well-researched, and utterly convincing, this book sounds a frightening alarm about unreliable expert testimony in the courtroom.