The Jungle Grows Back: America and Our Imperiled World 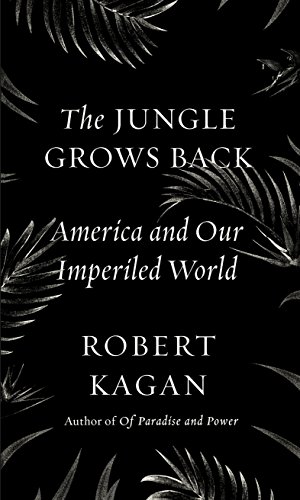 The “liberal world order” created by the United States after the Second World War is an historical anomaly that may be coming to an end, according to the Brookings Institution’s Robert Kagan in his new book The Jungle Grows Back.

Kagan, who served in the Reagan State Department in the mid-to-late 1980s, is the quintessential foreign policy neoconservative who believes that “the liberal order is like a garden, artificial and forever threatened by the forces of nature.” It can only be preserved, he writes, by a “persistent, unending struggle against the vines and weeds that are constantly working to undermine it from within and overwhelm it from without.”

The “vines and weeds” that threaten it today, according to Kagan, all come from the political Right—authoritarian foreign powers such as Russia, China, Iran, and North Korea and domestic conservatives who yearn “for order, for strong leadership, and . . . for the security of family, tribe, and nation.”

Kagan views authoritarianism as a greater threat to the survival of democracy than communism because in his view an unenlightened authoritarianism is more consistent with human nature. The United States and the countries of Western Europe, he writes, are retreating to nationalism and tribalism while moving away from the enlightened universalism that has supported the liberal world order since 1945.

He criticizes the foreign policy “restraint” of the Obama administration and the “America First” foreign policy of the Trump administration, yet he acknowledges that both appeal to many Americans who yearn to be a “normal” country and who recoil from being the world’s policeman.

For Kagan and some other neoconservatives, the end of the Cold War changed nothing. America’s global responsibilities remain the same, albeit with different adversaries and more diffuse threats. Those who today counsel restraint, Kagan warns, risk repeating the errors of the 1930s and the 1970s when America’s timidity enabled geopolitical threats to grow.

Kagan worries that as American power wanes in Europe and East Asia, the transformation of the global power structure accomplished by the creative statesmanship of the immediate post-World War II period will end. European geopolitics may return with a vengeance, while East Asian geopolitics will intensify. He even raises the specter of nationalistic Germany and Japan once more acting assertively on the world stage.

Although Kagan decries the “new realism” that emphasizes the limits of American power, it was, ironically, the success of Kagan’s worldview as practiced by the George W. Bush administration that produced the political environment for a more restrained American foreign policy.

The seemingly endless war in Afghanistan and the unsuccessful war in Iraq—waged to implant democratic values and practices in regions inhospitable to democracy—demonstrated for those not blinded by hubris the limits of American power.

In some parts of the book, Kagan confounds more than he informs. China and North Korea, as Kagan surely knows, are not rightist conservative powers; they are leftist communist regimes. Americans, despite Kagan’s claim to the contrary, did not exaggerate the risks communism posed to their way of life. A successful U.S. foreign policy does not require “a belief in the universalism of rights.”

Those presidents succeeded by husbanding and deftly wielding American economic and military power to support American interests, not by dispatching American troops willy nilly to spread democracy or transform the world. America, John Quincy Adams said, is the well-wisher of freedom to all but the champion and guarantor only of her own.

While Kagan’s worldview contains some elements of Wilsonianism, he also writes persuasively about some eternal truths of international relations that should inform any U.S. administration’s approach to the world.

He understands that it is American military predominance, not “soft” or “smart” power, that ultimately supports the U.S.-led world order.

He realizes that the struggle for power is a permanent feature of international relations.

He has a pessimistic view of human nature and notes that policy choices are frequently limited to bad and worse options.

He knows that there are no permanent solutions to foreign policy problems and that containing or keeping a lid on trouble is often the best we can do.

He recognizes that a rising China poses the greatest geopolitical challenge to the United States in the early 21st century.

Kagan cites Bismarck and Disraeli, both realists, as the most masterful statesmen in history. He might better appreciate counsels of restraint by remembering that it was Bismarck who wisely remarked: “Man cannot control the current of events, he can only float with them and steer.”