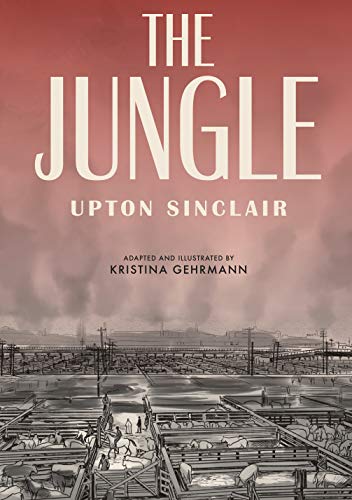 “In many ways, Gehrmann achieves what Upton Sinclair never quite did: She makes the characters real and complex, and she makes the political story a movingly human one.”

Upton Sinclair’s revolutionary 1906 novel The Jungle is well due for a graphic novel adaptation, and Kristina Gehrmann’s excellent version has finally been translated into English. (Though Sinclair wrote in English, Gehrmann is, perhaps unsurprisingly, German.)

The story is already set: a Lithuanian immigrant family arriving in Chicago in the last years of the 19th century sets out to build a life working in the city’s meat-packing industry. Their initial optimism is gradually worn away by exploitative working conditions, extortionate housing schemes, horrifying health violations within the factories, a lack of community outside the factories, sexual harassment, and a punitive legal system.

Upton Sinclair was a journalist, and the novel was based on interviews he conducted with workers in the meat-packing industry. Sinclair’s own politics were specifically socialist, and there’s a clear socialist approach in his text, but the book’s strongest influence at the time was on food policy rather than worker rights. Readers were appalled to discover the level of contamination in the meat they were buying, and the Meat Inspection Act and the Pure Food and Drug Act were both passed in 1906 as a result of Sinclair’s novel.

In her adaptation, Gehrmann makes thoughtful, strategic choices as to which of Sinclair’s threads to take up. More than a century after the novel was first published, some of its themes remain brutally urgent; others are largely (though far from entirely) products of their time.

Gehrmann’s adaptation focuses on labor injustices and their associated problems. The immigrant family is determined to get ahead by “working harder;” their dark discovery is that “just work harder” is a self-defeating mantra in the face of a system that exploits effort without rewarding it and treats individual workers as expendable.

Without directly commenting, Gehrmann makes clear the bitter irony that more than a century after Sinclair published his book, the old patterns have re-established themselves for the working poor. Older workers are unofficially ineligible for hiring. Protagonist Jurgis is offended that his father, at 60, is unhireable: “But . . . he is healthy and full of energy!” A coworker scoffs, “So? How are the bosses supposed to know that? Forget it. The 20 year olds outside the gate are also ‘healthy and full of energy.’”

The lack of maternity leave forces Ona, Jurgis’ wife, back to work only days after giving birth. Female workers who decline their supervisors’ sexual advances are laid off, and those who submit are dragged into sex work that enriches their supervisors but never themselves. Women are consistently underpaid, even when doing the same work as men.

In The Jungle, unionization, solidarity, and collective bargaining are the only remedies for workers. Expecting compassion and justice from corporate employers only results in physical breakdown and misery. Jurgis initially rejects unions as greedy organizations seeking part of his paycheck, but he comes to understand the necessity: “At first, I didn’t really understand the importance of what a union did. But now, over time, I’ve come to understand. . . . I don’t get paid for any fractions of an hour! These crooks get us to work more and more sections of hours that we are not paid for at all!”

The pro-union message is a timely one, as American workers from Amazon box-packers to airline workers struggle to unionize, and corporate anti-union propaganda spreads. Jurgis’ fury is utterly modern in the face of Delta Airlines’ recent campaign against collectivization: “Union dues cost around $700 a year. A new video game system with the latest hits sounds like fun. Put your money towards that instead of paying dues to the union.”

The politics of The Jungle are clear and direct: capitalize is exploitative; workers must unionize to survive; the dream of “making it in America” is a nightmare. Gehrmann doesn’t deny Sinclair’s purpose, but she balances it with delicate, human artwork that emphasizes the life of the family and the individuality of the characters. Her illustrations are black and white, punctuated by watercolor red for depth. (The red is often a family member’s clothing or a building, and only occasionally a sign of the blood that pervades the story.)

The illustrations carry the narrative, leaving Sinclair only in the dialogue. In doing so, Gehrmann omits the more irritating aspects of Sinclair’s novel, like his condemnation of the family’s eating habits and his commentary on the evils of ignorance, which today feel deeply condescending. Gehrmann’s art conveys the story without that intellectual remove. In many ways, Gehrmann achieves what Upton Sinclair never quite did: She makes the characters real and complex, and she makes the political story a movingly human one.