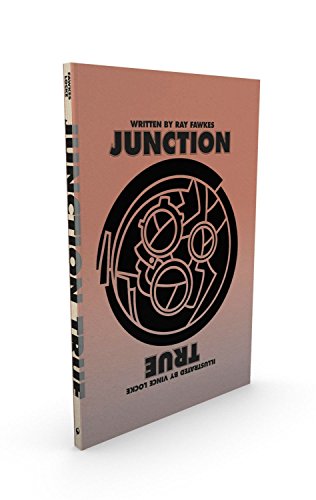 Beginning with the slipcover presentation that reveals a second cover underneath, to the story and illustrations themselves, Junction True presents itself as different from the start. A near-future, almost cyberpunk, but not quite, tale, Junction True mixes a subset of humanity’s obsession with body modification as well as humanity’s general obsession with love and, well, obsession.

The story takes place in a world where some of the youth have dived into a fad of extreme body modification that includes the use of glowing worms that draw designs under the skin, tapeworms for that extra skinny look, chemical enhancements that turn the body into its own drug factory, leeches, sex runes, and other experimental enhancements that make a normal tattoo look like a wash-off decal.

Dirk, a young man obsessed with a woman he has met in one of the “Neumod” clubs, decides that his love for this strange woman is strong enough to be joined with her forever. The woman, Teralyn, sees Dirk as a way to crush the boredom that permeates her life. Together they seek out a “surgeon” that can perform the ultimate body modification: a junction true that will allow Teralyn to be connected to Dirk via ports surgically inserted into their bodies. But it is not a connection that is beneficial to both. Dirk must give up all control of his nutrients, relying solely on Teralyn for sustenance through the body mod ports.

Codependent doesn’t even begin to describe their relationship.

And all of it is being “journaled” on the web via a headset Dirk wears, letting the public and the neumod scene watch the transformation in real time, strengthening the codependency on a global scale.

Dirk’s friend, Detka, also a journaler, hunts for the horrors of neumod, convinced it is a dangerous fad that leads most down a path of self-destruction not personal freedom. She struggles to get Dirk to see this, but his obsession with Teralyn is too much. Self-destructive or not, Dirk has chosen his path.

Filled with dreamlike illustrations by Vince Locke that are reminiscent of Dave McKean’s Sandman work, Junction True is a graphic novel that transcends the superhero and high-action fare that dominates the shelves these days. At times Blade Runner, at times Neuromancer, but with a distinct Dead Ringers vibe to it, Junction True explores the boundaries that society puts on mankind while also shattering the boundaries that we put on ourselves. It is a story of love, lust, boredom, rage, disfunction, friendship, and pure obsession.

For readers looking for something outside the box, for a tale that doesn’t have to explain everything for the reader to get it, for a lesson in what is fad and what is real, Junction True is an excellent addition to any collector’s shelves.