Up Jumps the Devil 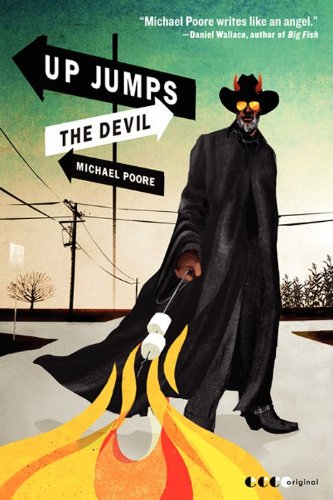 “. . . an elegiac masterpiece, equally dramatic as it is eloquent.”

Throughout history the mere mention of the names Lucifer, the Devil, the Fallen Angel, or Satan conjures up a frightening and haunting visual of a beast with horns whose dominant personality traits include manipulativeness, hatred, and covetousness.

Though some of these traits are portrayed in Up Jumps the Devil, John Scratch (aka, the Devil) is a cornucopia of complex identities and deep emotions.

Michael Poore weaves a provocative tale that captivates the reader from its inception. One of the writing techniques the author so skillfully uses to capture readers is his ability to create dynamic flashbacks throughout this novel containing plenty of historical grounding.

During major cataclysmic events in the world, John Scratch actively participates in the outcomes of wars, assassinations, and yes, even creates fame for those mortals craving success and riches. The Devil is, after all, the ultimate alchemist. In return for the achievement of their earthly desires, John Scratch becomes the proprietor of each person’s soul.

As he explains the methodology of his bargain with mortals, he states, “I’m like the landlord of your soul from now on. It belongs to me and it does what I want it to do. I’ll change you maybe a little, maybe a lot. Everyone’s different. But don’t be surprised if you feel a little crazy from now on. More impulsive, more hungry—”

John Scratch as the devil is beguiling, witty, and utterly self-centered. His character is charmingly reminiscent of Al Pacino’s portrayal of Satan in the film The Devil’s Advocate.

But Scratch has an interesting twist to his personality that is atypical of what most people perceive as that of the all-powerful Lucifer: He longs for the end of warfare and laments about the way our planet has (d)evolved. And he has powerful and unique insights into human behavior.

The reader is so drawn into this literally magical story as well as the main character’s perspective after having lived for centuries. We begin to see how likeable the devil can be at times: He feels pain and even grief. The main source of his grief is that he is hopelessly in love with another angel named Arden and tries to convince her to stay on earth; yet she is only able to remain with him for short periods of time, and he is helpless in his endless desire for her.

Scratch cruises around in John F. Kennedy’s black limo with his wicked sense of humor, trying to “help” people achieve their dreams as part of the ultimate Faustian bargain. In the midst of all this chaos going on in present times, he is the main star in a TV reality show; however, Scratch is fond of recounting his historical significance. He claims to have witnessed the fall of Rome, the erection of the great pyramids in Egypt, and to have positively influenced Ben Franklin as well as giving courage to Nat Turner in the fight for civil rights.

Up Jumps the Devil is an elegiac masterpiece, equally dramatic as it is eloquent. It is a Faustian tale well worth exploring. Unfortunately the magnificent tension built throughout the book stops short of a brilliant ending. A reader may feel a bit disappointed that the finale does not reach the pinnacle this story truly deserves.