Julian Assange In His Own Words 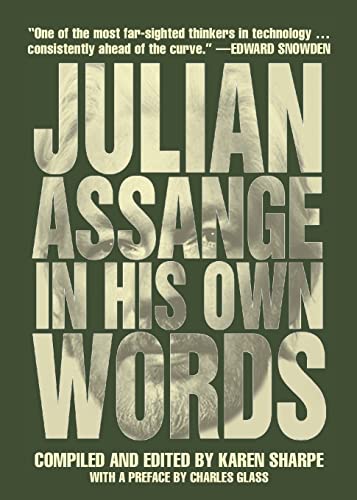 “‘It doesn’t suit the Western establishment narrative that, yes, the West has political prisoners. It’s a reality, it’s not just me . . . .’”
—Julian Assange

Almost the same day as the 2021 Nobel Peace Prize was awarded to two investigative journalists—Maria Reesa (CEO of the Filipino news site Rappler) and Dmitry Muratov (editor-in-chief of the independent Russian newspaper, Novaya Gazeta)—Julian Assange suffered a legal defeat that may result in his extradition to the U.S. for violation of the Espionage Act.

During this same historical moment, Julian Assange In His Own Words by Julian Assange, compiled and edited by Karen Sharpe, was released by OR Books.

Assange is not a journalist in the formal sense nor a traditional publisher; nor for that matter is he a “whistle blower” like Edward Snowden or Chelsea Manning. He founded WikiLeaks in 2006, describing it as follows: “WikiLeaks has become the rebel library of Alexandria. It is the single most important collection that doesn’t exist elsewhere, in a searchable, accessible, citable form, about how modern institutions actually behave.”

He assisted Manning aggregate thousands of State Department cables and other classified information and released them on his website, WikiLeaks, in 2010 and 2011.  The revealed documents outlined top US official perceptions of foreign officials, revealing widespread domestic corruption. The revelations helped trigger major unrest in Tunisia and other countries.

In addition, Assange’s website revealed extensive evidence of how US troops engaged in widespread civilian killings during the war in Iraq. One of the most shocking videos was of US airmen in an Apache helicopter killing Reuters journalists and others during a 2007 attack in Baghdad.

Assange has been a “prisoner” since June 2012 when he secured diplomatic asylum in the Ecuador Embassy in London after being falsely charged by Swedish authorities for alleged sexual offences. In April 2019 he was seized at the Embassy by British police for

having conspired with Manning to download classified databases and for committing computer intrusion, and incarcerated in London’s Belmarsh maximum-security prison.  As he reflects, “I have five-and-a-half square meters for my private use. Access to open air, to sunlight, has been forbidden by the British authorities. So, too, the possibility of going to hospital.”

Julian Assange In His Own Words is a relatively short (176 pages) and compact book that one can carry in a back pocket or shoulder bag. Carefully—if not lovingly—complied by Karen Sharpe, the book is relatively short and tightly organized into 13 chapters ranging from (in alphabetic order) “Accountability” to “WikiLeaks” with others like “Censorship,” “Power,” and “War.” As Sharpe, notes: “This book has no beginning and no end. Like Julio Cortazar’s Hopscotch, “you can read it from the beginning to the end or start anywhere, jump around. You can choose pages randomly. You can follow a particular subject . . . “

The British court’s recent ruling reverses a previous ruling that Assange would face unacceptable risks to his safety if held in the United States. A lower-court judge ruled in January that Assange would be at risk of suicide or other harm if held in American custody. The decisions was made in the face of a recent revelation that the CIA had prepared a plan to kidnap and, if that failed, assassinate Assange.

Sadly, if the current ruling is not reversed by a higher British court, Assange will likely be extradited to the US where he will face a trial for 18 federal charges, likely conviction, and a possible sentence of up to 175 years in prison.

As Assange laments: “I am unbroken, albeit literally surrounded by murderers, but the days when I could read and speak and organize to defend myself, my ideals, and my people are over until I am free!” And he concludes, “Everyone else must take my place.”