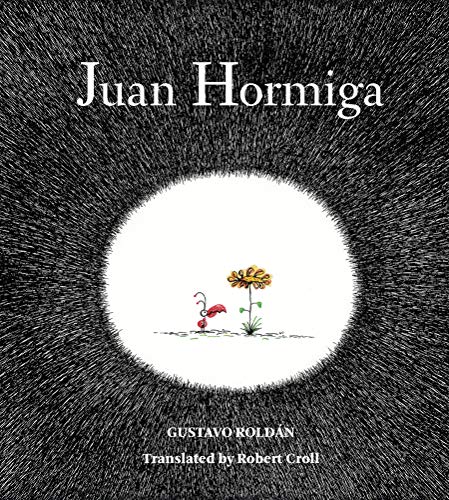 “Juan Hormiga is refreshing in its simplicity. It will find itself on many bookshelves because it is so different.”

Juan Hormiga by Gustavo Roldán, first published in Argentina in 2012, is either a complete rule breaker of a picture book or a throwback to the way picture books used to be made. First of all, there is lots of dialogue, usually a big no-no for the pacing of a story. The dialogue is printed in red while the narrative is printed in black. One page has 131 red words on it.

The story is simple. Juan Hormiga (ant) loves to tell stories of his grandfather’s adventures. As he tells them, the other ants in the ant hill stop their work and gather around him. The spare art on mostly white pages illustrates both Juan telling the story and the adventures of the grandfather. One double-page spread shows the ants busy at work in the ant hill, moving red and green fruits and leaves.

One morning, Juan packs a bundle and decides to go on his own adventures instead of just telling his grandfather’s.

After he leaves, the other ants get back to work, wondering where Juan Hormiga would be at that moment. They decide he must be coming to the river, which was swift and hard for an ant to cross. “He’ll surely ride across it on a branch, just like his grandfather did.”

As the ants imagine how Juan is doing, “a clap of thunder burst in the sky and gave way to rain that flooded everything as fast as I’m telling you now.”

The ants worry about Juan Hormiga and express their fears by filling a whole page with red dialogue. Two more pages of red dialogue discuss what might have happened to the little ant. Then they decide Juan has died and that they will pay homage to him by planting a flower. They meet up with a mosquito, who tells them that he has seen Juan and that he is very much alive. Much discussion in red occurs on that page, so much dialogue.

When they reach the willow tree by the river, they wake up Juan, who has taken refuge in a hollow of the tree trunk. Juan has no idea why they are so thrilled to find him. They discuss it at length.

Then Juan shares his food in the bundle while he tells another story about his grandfather.

The book is charming in its simple way. It doesn’t have a lot of action, mostly talking. It’s a thoughtful book when one realizes that Juan Hormige still hasn’t had his own adventures—he has slept through the storm and missed all the drama.

The art is done in black ink with bursts of color in red, green and tiny bits of yellow. The end papers are green. At the end there are two pages dedicated to Gustavo Roldán, one in English and one in Spanish, telling of his childhood with no TV and a dad who told stories. A third page tells of the translator’s childhood and how he likes to make lemon cloud pancakes.

This book is too long for bedtime, unless a parent doesn’t mind a lot of chit chat about what might have happened to Juan Hormiga. It is a quiet book with low-key art, much like Stuart Little, and long adult-like words (homage, intrepid, traversed, nocturnal, unscathed), unlike any American picture book on the market today.

Juan Hormiga is refreshing in its simplicity. It will find itself on many bookshelves because it is so different.