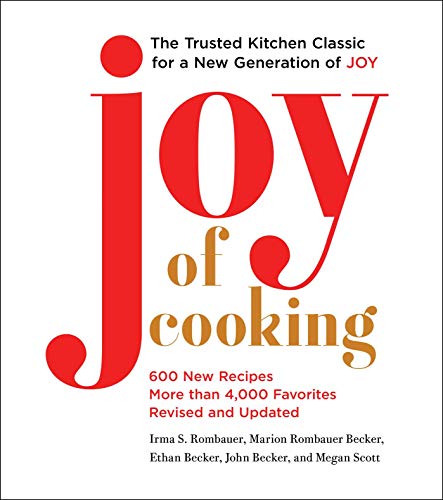 “Every decade or so, the immensely popular Joy of Cooking gets a spit shine. With over 600 new recipes and 4,000 updated classics, this new 2019 version is virtually glowing.”

Joy of Cooking is the one cookbook owned by just about everyone who has the slightest interest in spending time in the kitchen. It’s a must-have for preparing the basics, and its wide range of ethnic-inspired dishes has always inspired dabbling in a broader culinary world. Dubbed by many as the “kitchen bible,” there are almost 20 million copies in print, an astonishing number for any book, much less a cookbook.

Every decade or so, the immensely popular Joy of Cooking gets a spit shine. With over 600 new recipes and 4,000 updated classics, this new 2019 version is virtually glowing.

Missouri native Irma Rombauer originally published Joy of Cooking privately in 1931, then commercially in 1936. Leaning on her reputation as a society hostess and on her professed Victorian roots, her intent was to show the middle class how to entertain.

Over the years, Rombauer family members have released nine Joy updates, including this latest version. Various editions have dabbled in recipes for wartime rationing, the birth of the home freezer, and the rise of convenience foods. With each new release dated recipes have fallen by the wayside, while modern ones have been added to keep up with trends.

This 2019 release was revised by Irma Rombauer’s great-grandson John Becker and his wife, Megan Scott. The biggest change from the last edition in 2006 is those 600 new recipes, which mainly focus on modern eating and health trends.

Becker and Scott took on the monumental job of updating and thoroughly testing every single recipe in the book, including the 4,000 legacy recipes. They did so admirably, particularly when honing in on America’s evolving tastes.

New recipes feature innovative takes on salads, eggs, and desserts. There’s interesting assortments of pancakes and savory pies, and charts for buying and cooking greens and grains. Most timely are the long lists of vegetable, vegan, and vegetarian dishes, as well as an expansive section on fermenting, salting, and drying.

This new book also respects the old with the inclusion of recipes for the American classics Gooey Butter Cake, Cajun Dirty Rice, Chocolate Babka, Chicago-style Deep-dish Pizza, and Utica greens. A few antiquated dishes were eliminated. But in case you’re worried, there are still recipes for the stalwarts that keep bolstering the book’s popularity, including those for Butterscotch Brownies, Creamed Spinach, Fettucine Alfredo, and the ever-popular Angel Slices. And there’s even a section on updating cheeseballs!

In addressing America’s rapidly changing eating dynamics, the editors greatly expanded the “Know Your Ingredients” chapter. Seasonality is discussed. Recipes for baked goods are shown in grams for accuracy, and there’s sections on cooking sous vide and with electric pots. The bread section is particularly relevant, with recipes for gluten free and expanded discussions of making sourdoughs.

Although recipe introductions on core recipes sometimes read like they were written in the 1940s, many quaint reflections from earlier editions have been eliminated. This gives recipes a more modern feel, and it gave the editors something else important: more page space to cram in over 4,600 recipes.

The new Joy of Cooking has over 1,100 pages and weighs in at a hefty 4.9 pounds. But without the added production cost of color photos, the publisher, Scribner, is able to offer the book for $40.00, an extremely reasonable list price.

As a premier and indispensable kitchen reference, this 2019 version is destined to become a favorite for holiday giving, for bridal showers, and for goodbye gifts for students. As with all other versions, it will become dogeared and stained with drips, and recipe modifications will be penciled into margins. When thumbing through long-owned copies that worn look is expected of Joy of Cooking, which has earned its status as a solid part of American family traditions.