Journeys through the Russian Empire: The Photographic Legacy of Sergey Prokudin-Gorsky 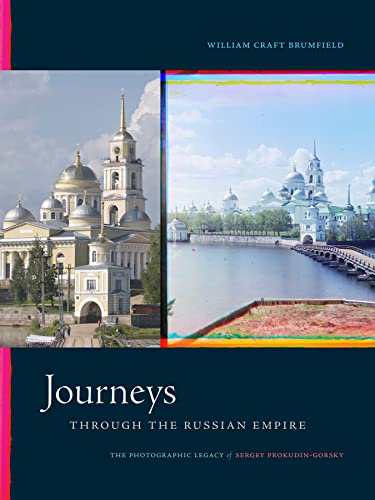 “This is rich journey worth taking for anyone with an interest in Russia and Russian culture, and it matters not at all whether you have been to Russia or not.”

This coffee-table sized book is a treasure trove of photographs taken by two men a little over a century apart. The photos move across the expanse of the Russian Empire as constituted at the end of the 19th and opening of the 20th century, a period of significant change for Russia.

The photos taken by Sergey Prokudin-Gorsky between 1905 and 1917 used an experimental technique of triple exposure plates to produce color slides and prints. These are now housed in the Library of Congress. Those taken by William Craft Brumfield in the late 20th and early 21st century are, for the most part, paired with those of Prokudin-Gorsky in these pages. When Brumfield took his photos, it was not his intent to duplicate those of Prokudin-Gorsky but there were many intersections of the journeys of these two architectural historians, and the pairings were serendipitous.

The result is striking as buildings and landscapes can be seen as they have changed, or not, over the passage of a century. The collection emphasizes the two great cultural regions of the European Russian homeland and the cities of Samarkand and Bukhara in Central Asia (Turkestan). The heart of the project is historical architecture although much more is revealed.

The volume is divided into eight geographic areas, revealing the remarkable cultural range from Smolensk to Samarkand. In addition to offering a documentary record, the photographs are at times breathtaking. Brumfield’s accompanying narrative is both a history of Russia and the architectural history revealed in the photographs.

The journey begins in the cities of Vladimir and Suzdal, cities familiar to many tourists who visit the Golden Ring. The second part of the book moves to the West and South of Moscow, and the next six chapters follow the journeys of Prokudin-Gorsky generally eastward across European Russia, much of it along the Volga. From there, it is on to the Urals and then into western Siberia and Central Asia (Turkestan), to the cities of Samarkand and Bukhara, ending with a trip north to the Solovetsky Islands in the White Sea.

Prokudin-Gorsky’s itineraries were set by the commissions he received from various sources including Tsar Nicholas II and the Ministry of Transportation. As would be expected, the cathedrals, monasteries, and convents of the Russian Orthodox Church are featured. In Central Asia, the influence of Islam was of major interest to Prokudin-Gorsky. Exteriors are the most common subjects, while the interiors, which have survived or been restored, are among the most spectacular and interesting photos.

It is impossible to detail each section of the book in this review, so it will be limited to a few items. As noted, the first section is centered in Vladimir and Suzdal. Brumfield considers the Cathedral of the Dormition of the Virgin one of Russia’s defining architectural monuments. Built between 1158 and 1160, it combines the styles of Novgorod and Kiev. Having been destroyed in a fire in 1185 it was rebuilt and is the centerpiece of the churches of Vladimir.

In nearby Suzdal is the Intercession Convent. It is particularly imposing when viewed from a distance so that the expanse and cupolas of the buildings are captured in one panoramic view. To the north in Rostov within the Church of the Miraculous Icon of the Savior, there is a fresco of the Last Judgement. It is fully captured in photos by both Brumfield and Prokudin-Gorsky as the damned await their fate in this very colorful and busy vision of the apocalypse.

In the Upper Volga region on the Tvertsa River is Torzhek. The city goes back perhaps as far as the 10th century and was sacked repeatedly by feuding Russian princes among others. After the founding of St. Petersburg, Torzhek became a trading center moving goods from the region to the new capital. There are a number of excellent photos of the town and the churches that offer many examples of neoclassical architecture. One of the major architectural monuments is the Monastery of Saints Boris and Gleb.

In the 1860s, the Russian Empire extended into Central Asia (Turkestan), and the photos from the cities of Samarkand and Bukhara are a treasure. Samarkand “Radiant Center of the Earth” goes back to the 6th century BCE. It was under Persian rule, conquered by Alexander the Great, was an important city of the Silk Road, where the cultures of India, China, and Byzantium mixed. Islam came to Samarkand during Arab conquests of the eighth century. Prokudin-Gorsky was most interested in the Islamic architecture of the city, and the result is a marvelous collection of photos from both Samarkand and Bukhara (“Holy City”) to the west.

This is a book to be approached slowly and with care. As you move through the eight regions of travel, there is much to be absorbed and to be savored including Brumfield’s narrative, which ends at the Solovetsky Transfiguration Monastery, an impressive array of buildings on the Solovetsky Archipelago in the White Sea.

The only weakness is the lack of a comprehensive map allowing the reader to situate these locations within Russia and the Soviet Union with reference points to major cities familiar to the non-specialist. There are maps, but they are small segmented guides to each region without sufficient landmarks to easily comprehend the locations under consideration.

This is rich journey worth taking for anyone with an interest in Russia and Russian culture, and it matters not at all whether you have been to Russia or not.