Is Journalism Worth Dying For?: Final Dispatches 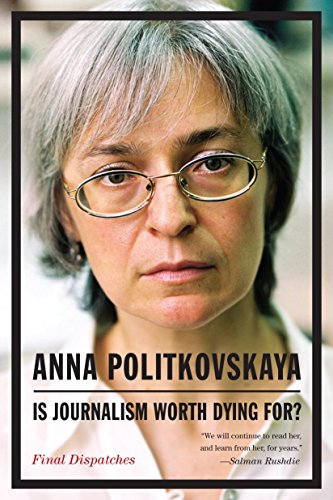 “Rarely is one privileged to read the words of a journalist who can be universally admired not only for her skills as a writer and her tenacity, but also for her humanity. . . . if Ms. Politkovskaya were able to answer her own question about whether journalism is worth dying for she would reply that it was most certainly worth living for, because that is exactly what she did: dedicate her life to telling the truth.”

The arrest of a former Lieutenant Colonel in the Russian police in connection with the murder of investigative journalist, Anna Politkovskaya, is a further reminder, if one was needed, that Ms Politkovskaya’s collection of dispatches Is Journalism Worth Dying For? is a prophetic piece of work that demands to be read. It contains for the first time a translated version of the unfinished article she was writing about torture, a damning article she announced she was writing on Radio Liberty on October 5, 2006—two days before she was murdered.

Rarely is one privileged to read the words of a journalist who can be universally admired not only for her skills as a writer and her tenacity, but also for her humanity.

Anna Politkovskaya’s collection of memoirs and articles cuts to the journalistic chase without any of the fashionably flowery “puff” favored by many journalists today, yet a very real sense of place is indelibly imprinted on the mind’s eye as one reads.

Described by the British Guardian newspaper as a “talisman” for the Russian press and a “hero to the liberal opposition,” Ms. Politkovskaya’s pursuit of the truth, despite the relentless pressure on her to capitulate, focused not only on the dark deeds of the Russian and Chechen leadership, but also on the impact on ordinary, innocent people. This makes her work all the more shocking, all the more real, and gives it a strength that transcends politics and authority, putting the lay reader immediately in the room with the powerful men who govern our world.

One such example came in London in May 2001, when Ms. Politkovskaya found herself availed of the perfect opportunity to fulfill a self-imposed task. This period was, of course, just months before 9/11, and before the wars in Iraq and Afghanistan.

For a long time, she had wanted to ask a burning question of the then Prime Minister of the United Kingdom, Tony Blair, a man still basking in his pre-poodle days of “spin” and toothy grins. A personal invitation to the traditional annual lunch of the London Press Club arrived unexpectedly, and with Mr Blair as the guest speaker, she hot-footed it to the venue—the upmarket, establishment hotel, Claridges, where she was amazed at the absence of strict security or watchful “snipers on the roof.”

Her question for Mr Blair was quite simple; Ms Politkovskaya wanted to know: “What were the qualities in Putin that Blair found so agreeable?” This was the nagging, doubting thought that sprung from an inquiring mind; a dedicated journalist committed to exposing the truth, not manipulating it, a woman who had witnessed first hand the ruthless treatment of her fellow countrymen and the annihilation of free speech.

After a fashionably nouvelle cuisine-sized portion of salmon, Ms Politkovskaya grabbed the opportunity to approach the formal lunch’s designated “entertainment,” Mr. Blair, who was sitting at the very next table. “The response of the Prime Minister of Great Britain to my inquiry regarding the nature of his affection for Putin was brief but comprehensive. He replied, ‘It’s my job as Prime Minister to like Mr Putin.’ And that was that.”

The simplicity of his analysis of his job in hand, as though he were no more than a bus-driver, stunned Ms. Politkovskaya, as it did this reviewer. To paraphrase the oft-quoted Irishman Edmund Burke, “All that is necessary for the triumph of evil is that good men do nothing.” Ms. Politkovskaya’s words capture the comparative innocence and light touch of the West in this period, and—to her mind—its indifference toward the plight of her fellow countrymen.

Many of Ms. Politkovskaya’s dispatches cite the malaises afflicting her country, and often the world: the way Islamophobia was being ratcheted up, the defeat of Russia in the second Chechen war. She describes how the “incompetence, inefficiency and perfidy” of the much-feared Russian secret service was further enhanced by use of the worldwide get-out-of-jail-free card of foiling Al Qaeda.

The need to “conquer terrorism” has seen intrusive new powers—some visible, some hidden—given to secret services in countries around the world, so in this respect, Russia is not alone. Neither is it alone in its attempts to suppress or quash the truth, by censorship or the gun, as Ms. Politkovskaya was only too aware. Yet somehow she remained positive:

“The world must start coming to an agreement about our collective survival rather than continuing its coalitions for extermination and destruction. The race between different kinds of madness we are witnessing will, of course, bring this about sooner or later. The question is only, at the cost of how many victims?”

Perhaps if Ms. Politkovskaya were able to answer her own question about whether journalism is worth dying for she would reply that it was most certainly worth living for, because that is exactly what she did— dedicate her life to telling the truth.