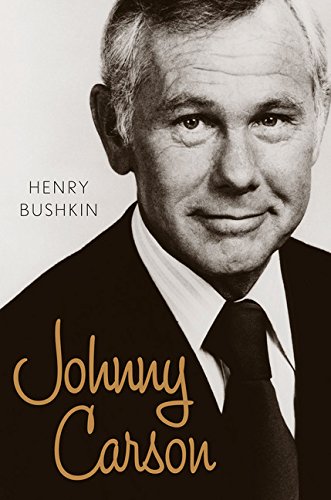 “. . . apparently in author Bushkin’s mind his requirement of confidentiality expired along with his client. The secrets Bushkin reveals about Carson are by turns hilarious and depressing—sometimes both at the same time.”

There’s a show business expression attributed to just about everyone who’s ever been in show business: “The most important thing in performing is sincerity. Once you can fake sincerity, the rest is easy.”

If there were ever a performer for whom that expression was perfect, it was Johnny Carson, the host of The Tonight Show for almost three decades and the man who defined the role of talk show host.

Now comes his former attorney, confidante, procurer, and running buddy, Henry Bushkin, with an intimate—at times too intimate—portrait of the king of late night.

If Bushkin’s last name rings a bell, it’s because you’re old enough to remember Carson referring to him in his monologues as “Bombastic Bushkin,” his business partner who was constantly bringing him terrible deals in which to invest.

It turns out there really was a Bushkin, a living, breathing attorney who was no figment in the imagination of Johnny’s writing staff. Bushkin was a 27-year-old New York lawyer of no particular note who had been recommended to Carson to help clean up a mess the TV star faced. By this time, Carson was already the most revered talk show host in the nation, beloved by legions of fans for his good looks, quick wit, and aw-shucks Nebraska style.

The first meeting between Bushkin and Carson went well. To his astonishment, Bushkin had been recruited to be the attorney on a raid of Carson’s soon-to-be second ex-wife’s apartment. Five men, including Bushkin and even Carson himself, broke into her apartment and found evidence that she had been indeed cheating on Carson—with none other than former football star and current sports broadcaster Frank Gifford.

That’s how the book begins. It continues for 304 pages of equally upsetting memories from the man who may have known Carson better than anyone else. Bushkin straightened out Johnny’s finances, which were in a terrible mess, and set Carson on the road to massive wealth. He also traveled with Carson to Vegas, played tennis with him almost daily, and basically did whatever Carson needed him to do. For Bushkin, Carson was his most important client. Bushkin was astonished, therefore, to read in an interview that Carson considered his attorney his best friend.

At one point, Bushkin assures Carson that he would never reveal any of Johnny’s secrets “in your lifetime.” But apparently in author Bushkin’s mind his requirement of confidentiality expired along with his client. The secrets Bushkin reveals about Carson are by turns hilarious and depressing—sometimes both at the same time. Bushkin presents Carson as a shameless womanizer who sought to find in relationships, both meaningful and meaningless, the affection he never received from his impossible-to-please mother.

Bushkin’s book implies that Carson may never have reached Wilt Chamberlain-like numbers of female conquests, but surely he approached Magic Johnson levels. It’s painful to imagine Carson, who succeeded so royally onstage, screwing up his life so thoroughly when the red light was off.

Bushkin writes that Carson’s insistence on his partaking in sexual romps in Las Vegas and elsewhere cost him his marriage. The real question is why Bushkin felt compelled to write a book that destroys whatever infallibility Johnny might have enjoyed with his still-adoring audience.

That part becomes clear late in the book, when we discover that Carson ultimately tossed Bushkin aside with apparently the same lack of remorse with which he dispatched three wives and countless girlfriends. Bushkin may not be bombastic in the book, which is actually extremely well written. But he certainly does indulge himself in the time-honored tradition of “getting back a bit of his own.”

If you want to read the ultimate insider’s take on the king of late night, then Bushkin’s Johnny Carson is your book. On the other hand, if you’d like to keep the image of him as that witty man behind the desk, cupping a cigarette for a quick drag, performing in the Mighty Carson Art Players, or laughing hysterically and enthusiastically at yet another new comic’s one-liners, this is one book you may want to leave unread.