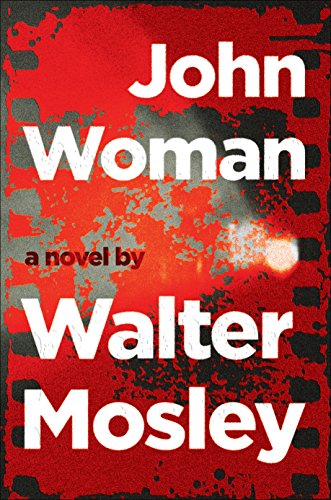 “Mosley’s new book, John Woman, though it only intermittently delivers the tautly rendered violence and suspense of his detective fiction, is as provocative and morally instructive as anything he’s written.”

The challenge for any novelist of a decidedly didactic bent comes in striking a satisfying balance between heavy handed sermonizing and engaging storytelling that effectively masks its preach-and-teach pretensions. In both the genre and literary fiction of Walter Mosley, assertive moralizing and punch-packing narrative typically go blow for blow.

In Mosley’s best-known work, the magnificent character arc of reluctant Watts detective Easy Rawlins mirrors the mid-20th century protest fiction of Chester Himes in pairing relentless object lessons on what it’s like to be black and poor in America with irresistible hard-boiled crime fiction. Mosley has also written starker racial parables, such as The Man in My Basement (2003) and Fortunate Son (2006), that defy the easy categorization of genre fiction and plumb the consequences of white supremacy as powerfully as any fiction of the last 20 years.

Mosley’s new book, John Woman, though it only intermittently delivers the tautly rendered violence and suspense of his detective fiction, is as provocative and morally instructive as anything he’s written.

In an opening act that plays like a cross between John Irving’s Last Night in Twisted River and Giuseppe Tornatore’s 1990 film Cinema Paradiso, Mosley introduces a handful of colorful characters in the orbit of young Cornelius Jones, beginning with his libertine Italian-American mother, Lucia, a “woman of red blood and chocolate cake” who speaks frankly of her sexual history with her son, laughs uproariously, and wears “dresses that flashed glimpses of the full length of her legs.”

Lucia’s saucy vivacity contrasts sharply with Herman Jones, Cornelius’ African American father and Lucia’s heartbroken former husband. Herman is a cautious, erudite, and philosophical invalid who lectures his son on a notion of history open to endless interpretation and inextricably linked with the present and future: “The person who controls history controls their fate. The man who can tell you what happened, or did not happen, is lord and master of all he surveys.”

As the book begins, teenage Cornelius, already balancing schoolwork with his father’s constant care, secretly takes over Herman’s job as projectionist at an East Village movie theater that shows only silent films. Always a quick study, Cornelius masters the workings of the theater’s ancient projector.

In true Twisted River fashion, John Woman pivots from this violent scene to a new identity and new life. Following his father’s death, Cornelius takes control of his fate, rewrites his own story, buries his dark past, and moves on to City College and then Harvard. He emerges as John Woman, a historian specializing in “Deconstructionist Historical Devices.”

Woman is a confounding, controversial professor, given to sleeping with coeds and rankling colleagues, admired and despised in equal measure by students and faculty alike. He relentlessly upends traditional pedagogy and spreads his father’s gospel at the New University of the Southwest, an unconventional Arizona university with conventional intradepartmental infighting and mysterious, Illuminati-like overlords.

From readers’ first exposure to Professor Woman, Mosley takes some substantial risks. In Woman’s first lecture, he baffles his students with a scattershot discourse on the impossible task of historical inquiry: “We are like the blind prophets guessing at the nature of an elephant—only the elephant is in another room, situated on the opposite side of the globe, while we still believe the world is flat.” Awaiting him at the end of class, Woman finds the dean of social sciences, who declares the lecture “magnificent.” It’s an uneasy moment for readers not quite sold on the magnificence of what they’ve just read, who might justifiably wonder if Mosley has unwittingly overplayed his hand. But as the dean flashes a “familiar huckster smile,” the author’s seeming self-congratulation gives way to unspecified subterfuge, and the game is afoot.

John Woman emerges as an odd sort of historian concerned less with the details, movers, and shapers of history than the insignificance of human actors in the face of broader historical forces and the insufficiency of human intellects to grasp them. Woman’s sense of the crushing inevitability of history arguably befits a fugitive whose own life is governed by the ticking time bomb of a Mayor of Casterbridge­­-like hidden past.

Mosley’s one overtly historical work, the novella-length essay Workin’ on the Chain Gang: Shaking off the Dead Hand of History (2000), resembles only in part the type of treatise John Woman might write. Indeed, Woman would most likely dismiss it as “an attempt to re-create so-called actual events according to the political, social or religious convictions of the author.” In Workin’ on the Chain Gang, as in most of his fiction, Mosley works with notions of race as constructed within American society. To John Woman, “black history” itself rests on too many false constructs to operate in any useful theoretical space.

But it’s not so much where Workin’ on the Chain Gang reflects on the past as where it looks to one possible future that points directly to the ideas Mosley wrestles with in John Woman, imagining a model for the new century where the “chains” of prejudice, assumptions, and representations give way to a revolution of ideas and possibilities.

If Mosley sets out to teach revolutionary ideas in John Woman as the book’s titular character does, those ideas are far more elusive than the hard-won, harder-to-ignore lessons of, say, Socrates Fortlow in Always Outnumbered, Always Outgunned. Mosley’s message is much more ambiguous here, but the narrative retains his trademark crackling intensity, and the author’s voice is as instructive and authoritative as ever.