John Wayne: The Life and Legend 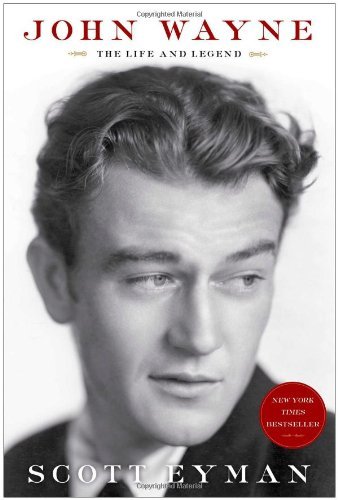 “Scott Eyman pulls off a nifty trick in his new biography John Wayne: The Life and Legend: He actually makes the Duke seem interesting. . . . downright fascinating.”

Author Scott Eyman pulls off a nifty trick in his new biography John Wayne: The Life and Legend: He actually makes the Duke seem interesting. No, more: From time to time the man seems downright fascinating. And thoughtful, and pleasant and—wise. . . .

Like here, in this quote that the author uses to introduce the reader to the actor:

“That guy you see on the screen isn’t really me. I’m Duke Morrison, and I never was and never will be a film personality like John Wayne. I’m one of his closest students. I have to be. I make a living out of him.”

Wayne/Morrison made this comment in 1957, after years of struggle had allowed him to attain a status as one of the most iconic stars in the sky over Hollywood. And after he had established himself as a movie star of a different sort: one who never sought to be thought of as an actor or artist, but instead as one who confessed that he found his motivation for most of the roles he played in his paycheck.

Thus Wayne hit Hollywood as something unique, something quite unlike the other studio players and hangers-on who worked the counters at Schwab’s, hoping to be discovered.

Starting out as a stuntman (like many of his fellow footballer players from USC’s team, he worked part time at the studios doing whatever stunts were needed) and later shifting over to bit parts before working his way up to leading man in a series of westerns that were shot when, of all the movies being shot, westerns were the bottom of the barrel. These were movies made with budgets so low that the studio would measure Wayne to see how tall he was and then paint the sets just up to two or three inches above the actor’s head, because the tops of the sets would not show in the shots.

Yet Wayne toiled on in silents, in talkies, for a full decade before anyone took notice.

The man who finally noticed John Wayne was John Ford, who cast him in the lead in his 1939 western Stagecoach.

And things took off nicely for Wayne.

In his long career, John Wayne made 169 movies. Among them were the aforementioned Stagecoach, as well as The Man Who Shot Liberty Valance, Red River, The Searchers, Fort Apache, Rio Grande, Rio Bravo, The Sands of Iwo Jima, The Quiet Man, True Grit, and The Shootist.

In the years since his death in 1979 he has been consistently ranked among the five most famous Hollywood stars.

But through it all it seems he never lost his inner Morrison.

As cameraman Bert Glennon remembers him: “I’ve seen him put his shoulder to a location wagon that was stuck or hold a pair of shears and comb for a hairdresser when she had to make a hurried change on one of the characters.”

In the pages of John Wayne: The Life and Legend Scott Eyman displays a gift for bringing Wayne’s world to life. Eyman manages, in 672 pages to not only create a fully fleshed image of John Wayne (“He was so American, so like his country—big, bold, confident, powerful, loud, violent and occasionally overbearing, but simultaneously forgiving, gentle, innocent, and naïve . . . John Wayne was his country’s alter ego.”) the movie star and Duke Morrison, the shadow self, but also the sunshine and glitter of Hollywoodland, the arena in which both lived and worked.

Eyman pays special attention to the women in the Duke’s life (Marlene Dietrich), including his attraction to difficult women (actress Stephanie Powers is quoted as saying, “Duke had something about distant, austere women. Perhaps it went back to his mother.”), and gives compelling information as well on the production of each of Wayne’s films. In doing so, the author gives the reader a fully fleshed out portrait of the man, the actor, and the American icon—no small feat.

The most interesting aspect of the book, however, is that Eyman (who has previously published biographies of Wayne’s chief collaborator, director John Ford, as well as the book John Ford: The Complete Films, 1894–1973, and biographies of Louis B. Mayer and Cecil B. DeMille), has a gift for the telling details, the minutiae, and the Hollywood anecdotes that bring the pages of this biography to life.

Chief among them is this, a what-could-have-been tale of Mel Brooks, John Wayne, and Blazing Saddles:

“Mel Brooks was at Warners working on the final draft of Blazing Saddles, which at the time was called Black Bart. Waling through the commissary, Brooks saw Wayne having lunch and realized Wayne would be hilarious as Waco Kid—the part eventually played by Gene Wilder. Brooks walked over, introduced himself and asked Wayne to read the script.

“’He knew who I was,’ remembered Brooks, ‘he had seen and loved The Producers. Before he could change his mind I slammed the script on the table and said, “Please read it at your convenience—like in the next hour.”’

“Wayne said he’d read it that night and Brooks could meet him at the commissary the next day. ‘I met him at the same table at the same time the next day, and he said, “I read it and found myself actually laughing out loud. It’s much too rough and raw. I could never be in a movie that used the N-word, or that had such low-down dirty talk. I’m sorry I can’t be in your movie but I promise you I’ll be the first one in line to see it.”’

“’And that’s the true story of Mel Brooks, John Wayne, and Blazing Saddles.’”

The joyous thought of John Wayne in a Mel Brooks movie aside, the idea of the big guy sitting alone in a darkened movie theater, laughing out loud over Zero Mostel in that most New York of all movies, The Producers, has great appeal.

Then again John Wayne: The Life and Legend displays the Duke as a man (close and admiring bond with Richard Nixon aside) of wit, charm, and integrity—a man and an actor who both had great appeal.

So much so that fellow star James Stewart cannily summed it up this way:

“People identify with me, but they dream of being John Wayne.”

Those who read  Scott Eyman’s excellent John Wayne: The Life and Legend will find it hard to disagree.