John Marshall: The Man Who Made the Supreme Court 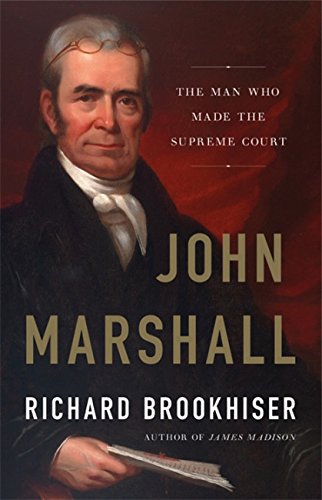 National Review Senior Editor Richard Brookhiser has perfected the art of brief, concise, and reflective biographies of America’s founding generation. He has done this with Washington, the Adamses, Hamilton, Madison, and Gouverneur Morris. His latest subject is John Marshall, who served as Chief Justice of the U.S. Supreme Court from 1801 to 1835.

Marshall is often called “the great Chief Justice.” He authored seminal court opinions that defined the structure and powers of the national government as outlined in the Constitution. Brookhiser contends that Marshall made the Supreme Court the equal of Congress and the president, and in some cases their superior, in terms of power.

Marshall’s opinion in Marbury v. Madison eloquently set forth the doctrine of judicial review, whereby the Supreme Court became the final arbiter of the meaning of the provisions of the Constitution. As Brookhiser notes, Alexander Hamilton in The Federalist Papers, had foreshadowed judicial review and earlier court decisions had implied that the Court had such power.

But it was Marshall’s opinion in Marbury that, in Brookhiser’s words, “carved it in stone.” The author describes Marshall’s judicial writing as “oracular . . . authoritative, inescapable.” In Marbury and later opinions, Marshall “made every point clearly and directly, without losing a view of his entire subject, and he moved through points and subject to his conclusions with seemingly irresistible force.”

Marshall was a Virginian who had served in General George Washington’s army at Cooch’s Bridge, Brandywine Creek, Germantown, Valley Forge, Monmouth Courthouse, Stony Point and Paulus Hook. Marshall revered Washington and later wrote a biography of the person he called “the greatest Man on earth.” Washington’s example, Brookhiser writes, “would inspire and guide [Marshall] for the rest of his life.”

Like Washington and other prominent Virginians, Marshall was a slaveholder. After the war, he studied law and entered Virginia politics. He saw firsthand the weaknesses of the Articles of Confederation. He served as a delegate to the Virginia convention that ratified the Constitution.

During the ratification debate, Marshall, foreshadowing his opinion in Marbury, noted that if Congress “were to make a law not warranted by any powers enumerated, it would be considered by the Judges as an infringement of the Constitution which they are to guard . . . They would declare it void.”

Marshall soon became embroiled in the growing domestic divisions over the nation’s policy toward the French Revolution and the war between France and Great Britain. Marshall sided with Washington, Adams, and Hamilton over his cousin Thomas Jefferson. The two men—Marshall and Jefferson—would grow to hate each other.

At Washington’s urging, Marshall ran for Congress and won. When Washington died in 1799, it was Marshall who informed the House of his death, eulogizing him by borrowing a line from Henry Lee that Washington was “first in war, first in peace, and first in the hearts of his countrymen.”

John Adams had succeeded Washington as president, and he selected Marshall to be his Secretary of State. The U.S. was in an undeclared naval war with France and Congress had passed the notorious Alien and Sedition Acts. Brookhiser notes that when Adams returned to Massachusetts to tend to his sick wife, “Marshall ran the executive branch in his absence.”

In December 1800, Chief Justice Oliver Ellsworth informed the president that he was retiring from the Court. Adams first turned to John Jay, who had been the nation’s first Chief Justice, but he declined. Adams then nominated Marshall who was confirmed on January 27, 1801.

Brookhiser provides brief narratives of the major cases, in addition to Marbury, decided by the Court during Marshall’s 34-year tenure as Chief Justice. Quite often, Marshall wrote for a unanimous court, something that rarely happens today.

Marshall wrote a 25,000-word opinion in United States v. Burr, which examined the law of treason and led to Aaron Burr’s acquittal. He upheld the validity of contracts in Fletcher v. Peck and Dartmouth v. Woodward. He validated the expansion of Congress’ power under the “necessary and proper” clause in McCulloch v. Maryland. He defined Congress’ power over interstate commerce in Gibbons v. Ogden.

Marshall died on July 6, 1835. Unlike his hero Washington, he did not free his slaves upon his death. President Andrew Jackson named Roger Taney as his replacement. Taney, who in 1857 authored the infamous Dred Scott opinion, would serve as Chief Justice until 1864.

Brookhiser’s last chapter, which examines Marshall’s legacy, is a masterpiece of concise analysis. “Marshall’s greatest accomplishment,” he writes, was “defending the Constitution as the people’s supreme act.” He rejected the widely held notion that the Constitution was a creature of the states, not the people as a whole.

Brookhiser notes that Marshall used three weapons to interpret the Constitution: its words, the historical context of its creation, and the intention of its drafters. If that is not exactly the originalism of Justice Scalia’s formulation, it is pretty close to it.

Brookhiser closes the chapter on Marshall’s legacy with a question posed by Jefferson’s critique of Marshall’s concept of judicial review: “Should the Supreme Court be the sole arbiter of constitutional questions?”

As the distance between us and the Founding lengthens, Brookhiser concludes, “there rises a coral reef of constitutional law, explicating, embellishing, and burying the document that supports it.” This has resulted in the court substituting its own will for the intent of the Framers and the words of the document itself.  As that increasingly happens, “the people cease, as Lincoln said, to be their own rulers, resigning their government into the hands of that eminent tribunal.”