John Lennon vs. The U.S.A.: The Inside Story of the Most Bitterly Contested and Influential Deportation Case in United States History 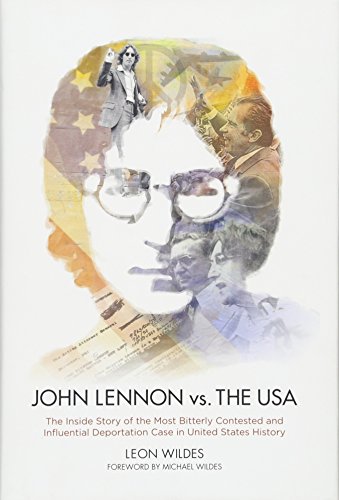 As author Leon Wildes himself admits, this book has been a long time coming. John Lennon fought his immigration battle against “the USA” back in the early 1970s. Even casual Lennon fans know that the Nixon White House (at least covertly) wanted John and Yoko deported from this country for what was seen as the pair’s subversive anti-Vietnam war activities.

Of course that was not the actual reason; the government used John’s one conviction for possessing hashish in England as its excuse. Back in January 1972, John and Yoko only had a month or two left before they had to leave the country, and Lennon’s then manager, the notorious Allen Klein, was desperate.

Enter Mr. Leon Wildes who was so tunneled into his life’s work and legal career that he swears he had never heard the names John Lennon and Yoko Ono before he got the call to meet a couple of “heavyweights.” Wildes, an observant Jew (as he points out in the book) from Queens, admits he had heard of the Beatles “but I certainly couldn’t name any of the band members.”

When the nerdy Mr. Wiles got home that night, his wife asked about the heavyweights to which Wildes responded, “Well, let’s see, I think it was Jack Lemmon and Yoko Moto.”

His incredulous wife correctly translated that into John Lennon and Yoko Ono and said, “Oh My God, Leon! Where have you been all these years?”

Wildes certainly has a tale to tell, and he tells it well, in simple straightforward prose that you might expect from a lifelong lawyer. He finds John outgoing, friendly, and funny while Yoko is described as possessing a keen mind that often is able to boil down a complicated problem to its essence. A word to some Beatles fans: Wildes has had a lifelong friendship with Yoko because of this case and heaps over-the-top praise on her every chance he gets—and that may rankle some Beatles fans who still blame Yoko for, well, you know. . . .

Wildes is clearly very proud of his work on the case, understandably so since he beat the government and got John a green card; however, most readers will skim the legal case and hone in on the juicy Lennon anecdotes, of which there are many.

One example: Wildes’ rival for most of the book is a government lawyer named Vincent Schiano. When John and Yoko first meet Schiano, it is in his office with Schiano’s son Ray who is mad for the Beatles. The small group has a happy time just before they are all to march into the courtroom for the serious business of the deportation hearing.

The informal get-together was so harmonious that Schiano suggests that Wildes make it clear to John that Schiano is the Immigration and Naturalization Service’s prosecuting attorney, in effect his natural adversary. When Wildes does just that, “Lennon jumped to his feet, whipped out a handkerchief from his pocket, bent down, and started polishing Schiano’s shoes! He looked up with a grin and asked, ‘Is there anything else I can do for you, Mr. Schiano?’”

Schiano comes off in the book as a caring, intelligent lawyer with high morals who fought his own agency for failing to prosecute a large group of Nazis who entered the USA after World War II.

It is all the more disappointing then that Wildes describes Schiano in the most casually bigoted way possible. Wildes says that wears “shiny” suits, has “shiny hair . . . slicked back with some sort of ‘greasy kid stuff.’ With his strong chin, pock-marked face, and intense dark eyes, Vinny gave the impression more of a Mafia chieftain than the chief of a government enforcement bureau.”

And this is someone Wildes swears he respects, a lawyer who stood up for Jews against Nazis! It’s a unconscionable.

One final thought: Had Wildes failed, John would have been forced to move back to England. One can only wonder if Mark David Chapman’s bullets would have found him there?